Unlocking the mysteries of the immune system to tackle childhood cancer 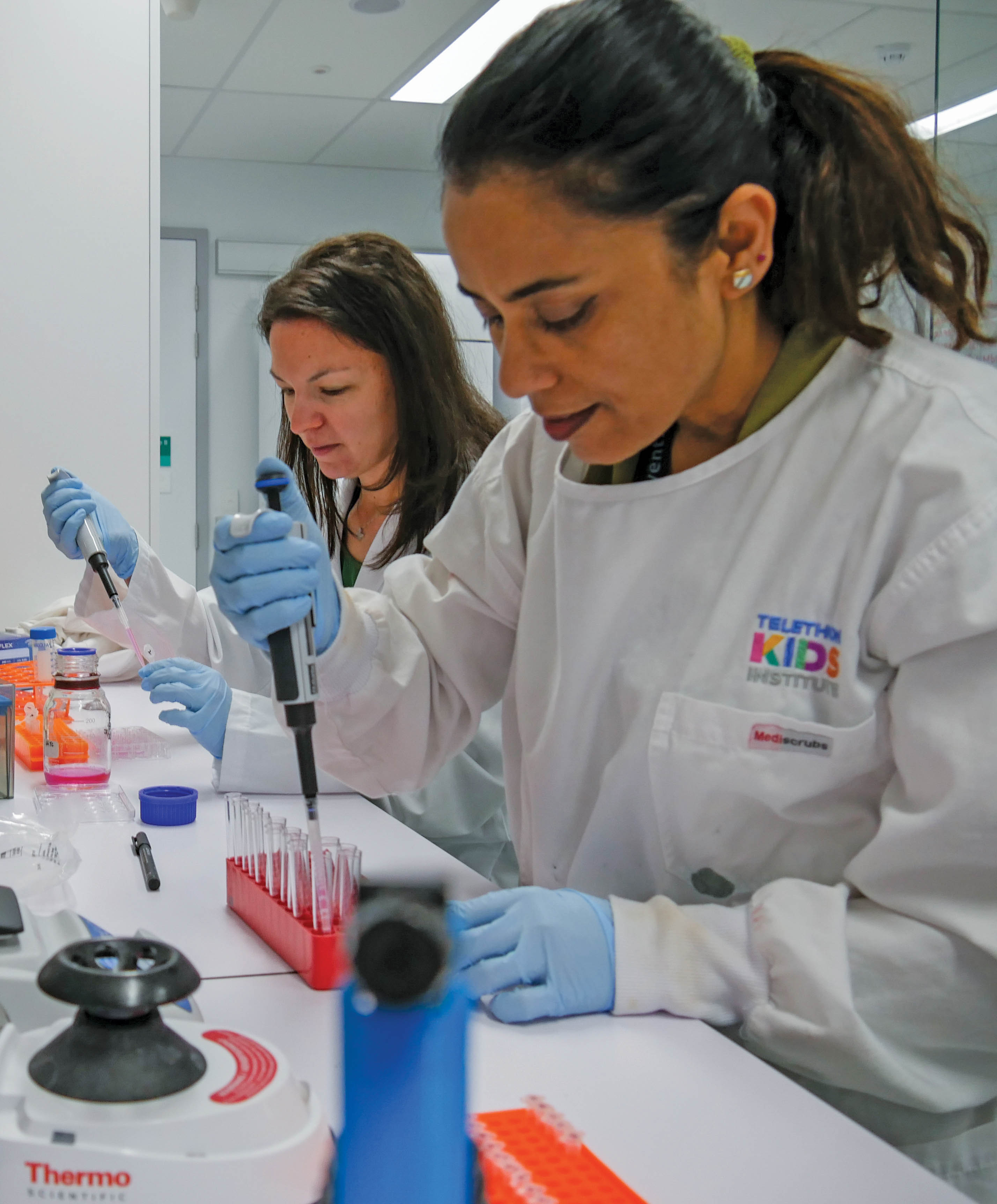 The Telethon Kids Cancer Centre is at the cutting edge of developing new, safer ways of treating children with cancer using their own immune systems. Led by Professor Terrance Johns, the Centre has become the first in Australia to work on developing new immunotherapy treatments for paediatric cancers – and the research is so promising it is now underpinning a significant amount of the Centre’s work.

For decades, surgery, radiation therapy and chemotherapy have been the main weapons in the fight against childhood cancer. But while they can be efficient at killing cancer cells, toxic radiation therapy and chemotherapy treatments take their toll on little bodies – often leading to lifelong impairments or even secondary cancers that could ultimately take the child’s life.

Now a new contender is in the ring to fight childhood cancer: immunotherapy. Its potential is so exciting, it has driven a conscious shift in focus for the Telethon Kids Cancer Centre. From sarcoma and leukaemia to adolescent melanoma and brain cancer – almost every research group is working to find new treatments that harness the immune system to fight cancer.

Immunotherapy, which involves ‘supercharging’ the body’s own immune cells to fight the cancer, has been used to successfully treat some adult cancers but has had less success in children, especially in solid tumours.
“I think one of the main reasons why is we simply don’t know enough about children’s immune systems in the context of cancer,” Professor Johns said.

“We don’t know how the immune system interacts with cancer in children and how that may be different to adults – and most of the current immunotherapy treatments have been developed in adults.”

For Dr Bree Foley, Senior Research Officer in the Telethon Kids Cancer Immunotherapy Team, unlocking the mysteries of the immune system is all in a day’s work.

“Cancer is really clever and it finds many ways to evade the immune system – it hijacks the normal processes,” Dr Foley said.

“What we’re trying to do is basically get the immune system to start doing its job again. How can we boost it? What kind of weapons or extra ammunition can we give to the immune cells to really kick-start them and basically get them to do their job?”

Dr Joost Lesterhuis and his colleagues in the Sarcoma Translational Research Team are working on an immunotherapy gel that could be applied directly to the tumour during surgery.

“So we’re developing a gel that the surgeon can apply during surgery and then close the wound and the patient goes home.

“Then over the course of days or weeks, the gel releases this immunotherapy into the wound area and activates an immune response. The immune cells can then mop up any remaining cancer cells.”

A type of immunotherapy known as cellular therapy has already seen some success in treating children with leukaemia. It involves genetically engineering the patient’s own immune cells in the lab to specifically target the cancer and growing them to an army of millions, before putting them back into the patient to travel around their body and fight the cancer cells.

Dr Bree Foley and the Centre’s Cancer Immunotherapy Team are working to fast-track this process by using healthy adult donor cells instead.

“It’s definitely the next big hope in cellular therapy because it can be taken from healthy people and given to patients.”

Finding safer treatments for children with cancer is what drives Dr Raelene Endersby, Co-head of the Brain Tumour Research Team.

“Treatments like radiation therapy and chemotherapy are very damaging to the normal cells in the brain that are left behind once the tumour has been eradicated.

“So we need to find more treatments that are safer and less toxic for children.”

For Professor Terrance Johns, driving a whole-of-centre focus on immunotherapy is a challenge he knew he needed to take on.

Cancer is still the leading cause of death by disease for Australian children. For our dedicated team of researchers, the stakes couldn’t be higher.