The immortal legacy of Jette Ford 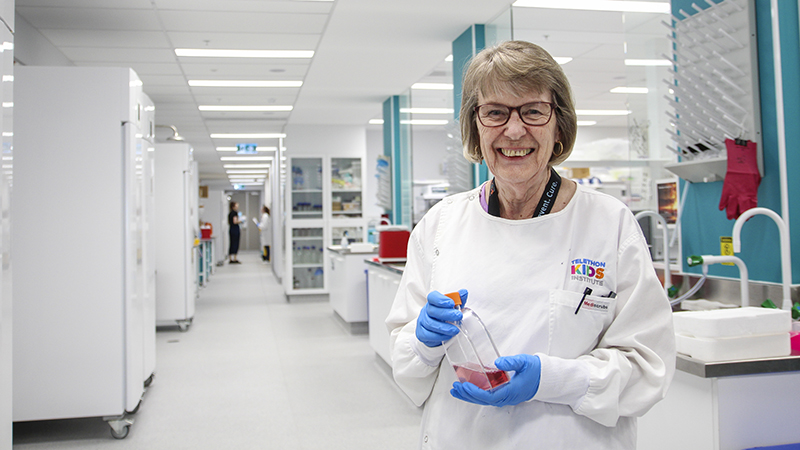 The Institute farewelled one of its most treasured employees this year, as Telethon Kids Cancer Centre research officer Jette Ford closed the door on a quietly stellar 37-year career which has helped to change the face of cancer research in WA and around the world.

Humble to a fault, Jette Ford wouldn’t tell you herself that – together with Telethon Kids founding researcher and Honorary Emeritus Fellow, Professor Ursula Kees – she pioneered paediatric cancer research in Western Australia.

She also wouldn’t tell you she’s one of the few people in the world who can reliably coax immortality out of cancer cells taken directly from patients – an exceptionally difficult task but one she’s mastered 116 times.

The significance of this feat and what it means for cancer research here and overseas cannot be overstated.

“She has probably cultured more cancer cell lines than anyone else in the world,” said Brain Tumour Research Co-Head Dr Nick Gottardo, who trained in lab work and cell culture under Ms Ford as a PhD student.

“These unique models enable us to do a great deal of scientific work, including drug testing and screening to try and identify new treatments for, in our case, children with cancer,” explained Co-Head of Leukaemia Translational Research, Dr Rishi Kotecha.

“Without them, we wouldn’t have been able to do a fraction of the research we’ve undertaken at Telethon Kids.

“But Jette hasn’t just produced these cell lines for our use here – we’ve sent them all over the world, to other parts of Australia, to the UK, America, Europe, parts of Asia – where other researchers are also using these resources to try to improve outcomes for children with cancer.

Her work is not just renowned locally, it’s renowned nationally and internationally, so she’s had a really important role in cancer research over the last 30 years or so.

Exactly how Ms Ford managed to repeatedly harness the immortality of cancer cell lines outside the body – including from tiny samples of incredibly rare cancers that few others have been able to tame – remains a source of awe to her colleagues.

“She’s a magician when it comes to growing up cell lines,” according to Cancer Centre colleague Joyce Oommen, who now cares for the extensive biobank of patient samples and cell lines Ms Ford established.

“Somehow she just knows what a happy cell looks like versus an unhappy cell.” Professor Kees attributed Ms Ford’s skill to her unique patience and rare work ethic. 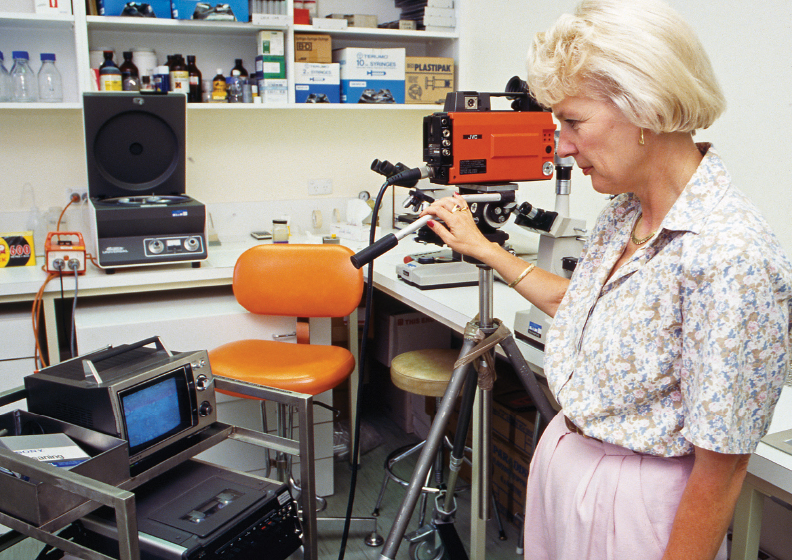 “It requires patience and insight to read these cells and she did it on a daily basis – often in her own time – and especially when they were in the critical stage,” she said. “Her dedication and success rate are second to none.”

Ms Ford herself credits her success to her lifelong motto: “Always be good at what you’re doing. Work hard, do it to your best ability and you’ll always have a job.”

“Like so many other students and researchers Jette took me under her wing and taught me everything she knew,” Dr Kotecha said. “I owe a large part of my success today to her mentorship.

She leaves an amazing legacy, not just in terms of the cell lines and tissue samples she leaves us with, which will enable us to continue advancing science for years to come, but her personal legacy.

Within months of starting at the new cancer research unit Jette Ford had established her first cell line.

Since then, as part of the Telethon Kids Cancer Centre which emerged from the fledgling unit, she has nurtured 116 cell lines out of 1,000 patient samples, overseen the arrival and management of a growing array of cutting-edge technologies – including Western Australia’s first liquid nitrogen tank – and built and cared for the Institute’s extensive biobank of paediatric cancer samples. Lab records reveal her handwriting on at least 9,000 samples – some going back to 1984.

Throughout it all, the research undertaken by Ms Ford and Professor Ursula Kees, focused predominantly on childhood leukaemia but also encompassing other paediatric cancers, was generously supported by the Children’s Leukaemia and Cancer Research Foundation (CLCRF) – which has raised millions of dollars to support this and other work within the centre over the years.

Longstanding CLCRF chairman Geoff Cattach was there when both Professor Kees and Ms Ford started. As the father of a 7-year-old boy with leukaemia, he was desperate for a cure and, with the Foundation, eager to support the new research focus.

Mr Cattach’s son Brent was just the third child in WA to successfully receive a bone marrow transplant as part of the then-revolutionary program begun by visionary PMH oncologist Dr Michael Willoughby in 1984. Professor Kees and Ms Ford were also involved, carrying out vital lab work as part of the program.

Brent, now 43, survived but has experienced long-term health issues as a result of the harsh leukaemia treatment typical of the day.

Mr Cattach said he was proud, through the CLCRF, to have had a key hand in supporting research which has helped to make leukaemia treatment gentler and more effective over recent decades.

“They’ve got children’s leukaemia to a stage now where it’s almost curable – not quite, but close to it,” Mr Cattach said.

If you could get to a stage where they could have a needle and prevent it, that would be even more amazing. In the meantime, the next best thing is knowing they can virtually cure it – and without the horrific problems attached to it that we had back in our day.

He said Ms Ford’s work had helped to shine a light on WA’s scientific strength.

“Once they started sending her cell lines overseas for people to do their research on, they couldn’t get hold of them quick enough – it was terrific publicity for WA as well.”

Mr Cattach has been CLCRF chair for 39 years now and – despite helping to care for both Brent and another son, Stewart, who survived two brain tumours – plans to continue fundraising efforts to support leukaemia research at Telethon Kids for a while yet.

“It’s been a labour of love and a long, hard road, but it’s been a wonderful result,” he said.