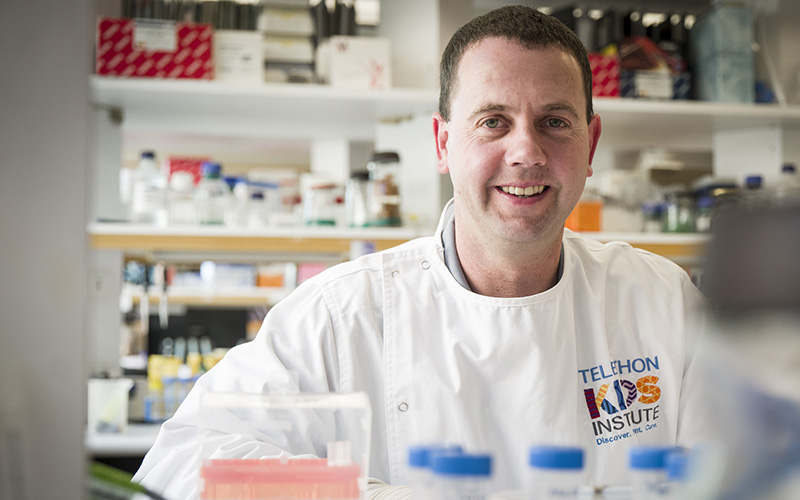 Cancer Council WA found Dr Waithman, who heads the Institute’s Cancer Immunotherapy Group, had made an outstanding contribution to cancer research over the past three years. Dr Waithman was part of a team that made a major cancer breakthrough in 2019, unlocking the mechanism used by the immune system to put cancer cells to sleep.

“Working at Telethon Kids Institute, we’re located inside Perth Children’s Hospital and as a researcher – that gives me a valuable insight into what life is like for kids with cancer,” he said.

We see the harsh treatments they go through, the toll it takes on their little bodies – and we see what their families go through. This is what drives me as a cancer researcher. We’ve got to find better ways to treat these kids. Treatments that are less toxic and don’t cause secondary cancers.

Dr Waithman said he was extremely grateful to the Cancer Council for the prestigious award, and paid tribute to all of his philanthropic supporters. “Without the generous support of so many organisations, including Rosemary Grant- Zaks Melanoma Research fellowship, this work wouldn’t be possible,” he said.

Cancer Council WA’s CEO Ashley Reid said Dr Waithman was a worthy recipient of the Cancer Council WA Cancer Researcher of the Year Award. “Dr Waithman has led the Telethon Kids Institute team to learn more about the mechanisms responsible for keeping cancer tumours under control and in a state of dormancy,” he said.

This research will hopefully lead to novel ways to maintain cancer in a dormant state and effectively cure people. It is so encouraging to see passionate cancer researchers, such as Dr Waithman, striving to ensure the best possible outcomes for local cancer patients and making such an important contribution to the global effort to defeat cancer.