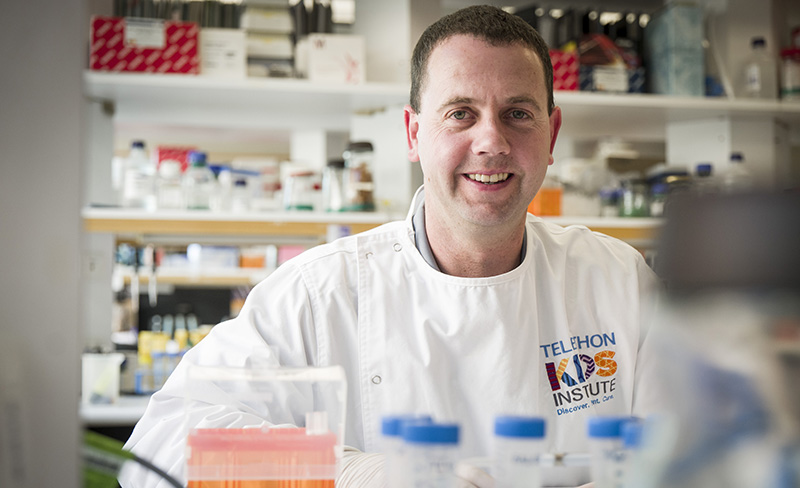 A team of Australian scientists including cancer researchers from the Telethon Kids Institute have made a crucial breakthrough in understanding how the immune system puts cancer to sleep.

Their findings, published today in Nature, could pave the way for improved cancer treatments which – rather than eradicating a cancer altogether – achieve the next best thing: permanent dormancy.

The pioneering research was the result of an international collaboration led by Telethon Kids and the Peter Doherty Institute for Infection and Immunity at the University of Melbourne.

A team including Dr Jason Waithman, Head of the Cancer Immunotherapy Group at Telethon Kids, investigated the role of a particular immune cell – tissue-resident memory T (TRM) – in controlling the growth of melanoma tumours.

Dr Waithman said scientists had known for a long time that malignant cancer cells could remain in a person for years or even decades without manifesting as disease – in a state known as immune-mediated equilibrium – before ‘waking up’ and becoming life-threatening.

“What we haven’t understood are the mechanisms responsible for keeping tumours under control and in this state of dormancy,” Dr Waithman said.

“All we knew was that this ‘black box’ of cancer control existed – and that if we could understand this process better, we could potentially learn how to exploit it in more patients, thus saving more lives.”

TRM cells (in light green) surrounding and keeping the melanoma cells (in red) in check. Image courtesy of Doherty Institute.

Dr Waithman developed a novel melanoma model that enabled the researchers to study immune-mediated equilibrium in more detail, in turn leading them to identify an important cell type responsible for driving and maintaining the process – TRM cells.

He and his collaborators from the Doherty Institute were able to capture real-time images of the cells as they surveyed melanoma cells and kept them under control for almost a year.

“Using highly sophisticated technology at the University of Melbourne we were able to watch this unique cell population surveying the cancer and keeping it asleep,” Dr Waithman said. “This showed us how the immune system was involved, and more specifically, we were able to identify the specific cell type – TRM cells – that was responsible.

“We then set up an experiment where we depleted the TRM cells and found that removal of the cells broke that control of the melanoma cells and enabled the cancer to re-emerge.

“The next step in this research is to delve into the mechanism further so we can make this process happen more often.”

Dr Waithman said the researchers hoped the findings would lead to improvements in existing cancer immunotherapies.

“We hope this research will lead to novel ways for us to maintain cancer in a dormant state and, effectively, cure people,” he said.

The research was a collaboration between 13 Australian and international institutions including Telethon Kids, the Doherty Institute, and the University of Bonn, with funding sources including the National Health and Medical Research Council, Cancer Council of Western Australia, BHP, and the German Research Foundation.

A team of Australian scientists including cancer researchers from the Telethon Kids Institute have made a crucial breakthrough in understanding how the immune system puts cancer to sleep.