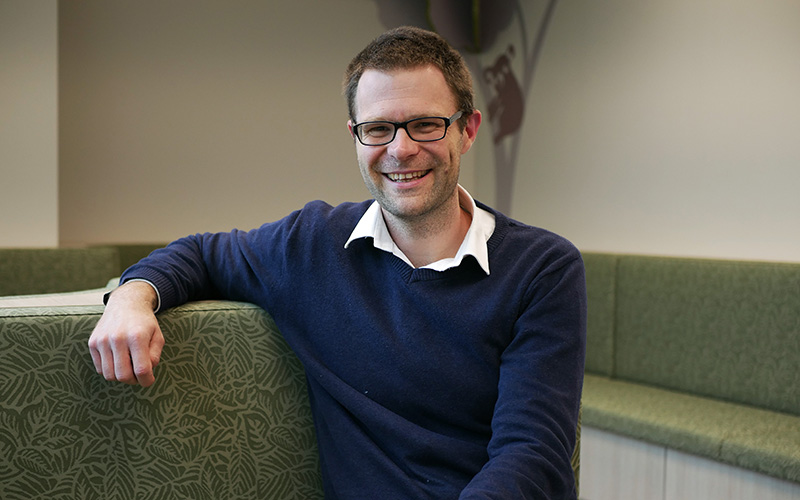 Telethon Kids Institute autism researcher Professor Andrew Whitehouse has been inducted as a Fellow to the Australian Academy of Health and Medical Sciences, making him the youngest-ever Fellow elected to the prestigious academy.

Professor Andrew Whitehouse (Angela Wright Bennett Professor of Autism Research at Telethon Kids and The University of Western Australia and Director of CliniKids) is among 29 new Academy Fellows recognised as leaders in health and medical sciences in Australia.

Professor Whitehouse, who turned 40 last month, was elected for his major scientific advances in autism assessment and intervention and is one of only a handful of Fellows in the Academy’s history whose research focus is autism.

He is highly regarded for his research and advocacy and recently attracted international media attention for his team’s research into early intervention for babies displaying early autism behaviours.

Telethon Kids Institute Director Professor Jonathan Carapetis, who was inducted into the Academy in 2014, said Professor Whitehouse was the sixth Fellow from Telethon Kids – a clear reflection of the outstanding quality of researchers the Institute was fortunate to have working for it.

"Andrew’s research and advocacy has had a significant impact on the scientific community and, most importantly, on the lives of children on the autism spectrum and their families” Professor Carapetis said.

“Andrew should be very proud of this honour, as we all are.”

Recent research findings have transformed our understanding about autism, but the clinical implementation of this knowledge is still lagging. Translating these extraordinary research advances into genuine clinical impact is as hard as the research that underpins it, and I’m ready to roll up my sleeves.

Academy President Professor Ingrid Scheffer said she was delighted to see so many outstanding individuals join the Academy, which encompassed the nation’s research and science leaders.

“I look forward to seeing how our new Fellows contribute to the Academy’s goal of addressing the most pressing health challenges facing society,” Professor Scheffer said.

CliniKids is Telethon Kids Institute’s first team integrating world-class research with a clinical service for children with developmental delay and/or autism spectrum disorder and their families. By working side by side, our exceptional team of researchers and clinicians, led by Professor Andrew Whitehouse, put the research into practice, providing families with access to individually tailored, holistic supports and the best evidence-based therapies in the world.