Could Perth lakes hold the secret to fighting antibiotic-resistant superbugs? 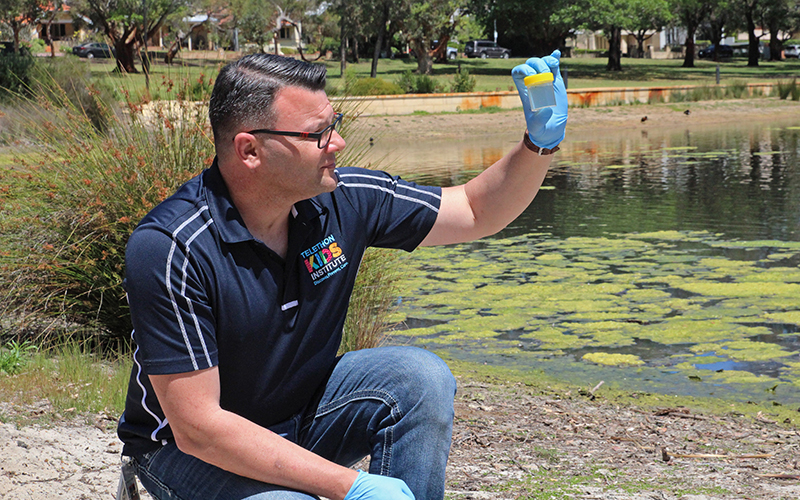 Perth researchers have discovered a predatory virus living in the city’s lakes and rivers that can potentially fight antibiotic-resistant superbugs in children.

Wal-yan Respiratory Research Centre researchers are exploring this naturally-occurring virus ‘bacteriophage’ (or ‘phage’ as it is more commonly known) with the aim of developing urgently needed alternatives to antibiotics to treat chronic airway infections in young people with cystic fibrosis (CF).

Associate Professor Anthony Kicic, Head of Airway Epithelial Research at Telethon Kids Institute, is working with his team at the Wal-yan Centre to give families another weapon in the fight against pseudomonas – the bacteria responsible for causing the common lung infection that children with CF are particularly vulnerable to.

“By the time a child reaches the age of about six, they may have had multiple infections which can evolve and become colonised, causing irreversible lung damage,” Assoc Prof Kicic said.

“When colonisation happens, children require an immediate six-week stay in hospital for IV antibiotic treatments, which unfortunately may need to be repeated to try and beat the infection.

“So, it’s important that we find an alternative therapy to antibiotics to give children with CF and their families more options and a better quality of life.”

Long-term antibiotic use can also cause extreme side effects, such as nausea and poor gut health – not to mention the pseudomonas bug becoming antibiotic resistant.

Antibiotic-resistant bacteria has been recognised by governments and industry as a serious and growing issue, and is particularly significant for people living with CF.

“Phage has this incredible ability to recreate itself inside the bacteria and multiply – effectively creating a microscopic army against the bacteria, destroying the lung infection,” Assoc Prof Kicic said.

“So far, we have identified at least 50 bacteriophage that are effective against pseudomonas.

“We are creating a library of these phages and then playing match-maker to try and match a particular phage that will be effective on a particular type of the pseudomonas bug.”

‘Phage cocktails’ can also be created that are a mixture of different phages to ensure they are effective.

“Once correctly identified, we are seeing a 100 per cent success rate with killing that particular bacteria,” Assoc Prof Kicic said.

To collect the bacteriophage, Assoc Prof Kicic heads to the ponds and lakes around metro Perth and brings samples of the pond water back to his lab, where he filters, cleans and purifies it, and finally extracts the bacteriophage.

Wet areas where there is abundant bird life is the ideal environment to collect bacteriophage. A unique partnership with the Subiaco Wastewater Treatment Facility has also provided Assoc Prof Kicic with a source of bacteriophage samples.

With phage therapy clinical trials due to start in 2021, delivered to the patient via a nebuliser, this research is well on its way to being translated into available treatments for families.