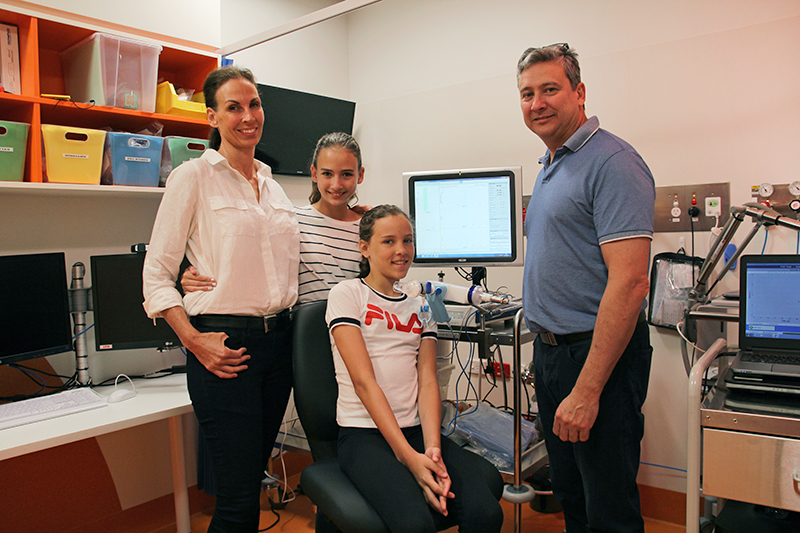 Isobel, who was born three weeks early, was failing to gain weight and after a series of tests, doctors gave Christine and her husband Gerard the news that Isobel had CF, a genetic condition that causes persistent lung infections and progressive lung damage.

Two years after Isobel was born, the Donaldsons welcomed their fourth child and second daughter, Ruby, into the family. Soon after they received the devastating news that Ruby also had cystic fibrosis.

“In the early days it was me coming to term with the diagnoses emotionally because the girls were relatively healthy,” Christine says.

Cystic Fibrosis causes the lungs to produce an abnormal amount of thick and sticky mucus, trapping bacteria and causing recurrent infections. These infections can cause permanent and irreversible lung damage and can also lead to lung failure.

Isobel and Ruby have received constant medical treatment and physiotherapy since birth to keep their lungs healthy but antibiotic resistance means they are constantly in need of new treatments to fight the infections.

“We know that if infections are left untreated there is the possibility of permanent lung damage,” Christine says.

“You're always wondering what's going on under the skin. They look so healthy on the outside. Any cough that I hear them do, in the back of my head, I'm wondering where that's going and what damage it’s causing.”

But a new therapy being developed by Telethon Kids spin-off company Respirion could provide new hope for kids like Isobel and Ruby.

The treatment – a new inhaled antibiotic therapy - is the brainchild of leading Australian pulmonary specialist, and Respirion Founder and Director, Dr Barry Clements.

“With no new antibiotics on the horizon, I found a chemical that weakened the defences of resistant bacteria in the laboratory.

“I took this chemical and combined it with an antibiotic and found it increased the killing power of the antibiotic on these resistant germs, but also improved the patient’s overall lung function.”

Now, thanks to a $20 million investment from the Medical Research Commercialisation Fund’s Biomedical Translation Fund (MRCF BTF), and $4 million from the US Cystic Fibrosis Foundation, Respirion will take the therapy into larger clinical studies, in the hope it will one day soon be available to patients.

“Our aim is to reduce infections, reduce hospitalisations, improve quality of life and life expectancy in these patients,” says Dr Clements.

The Donaldsons welcomed the announcement.

“To hear that they’re trialling something that is going to help treat the infections the girls have and hopefully keep them healthy and out of hospital is huge,” Christine says.

“When I hear the words ‘increase in lung function’, that's fantastic, that's going to give our girls longevity and hopefully keep them out of hospital so they can just enjoy being kids.”