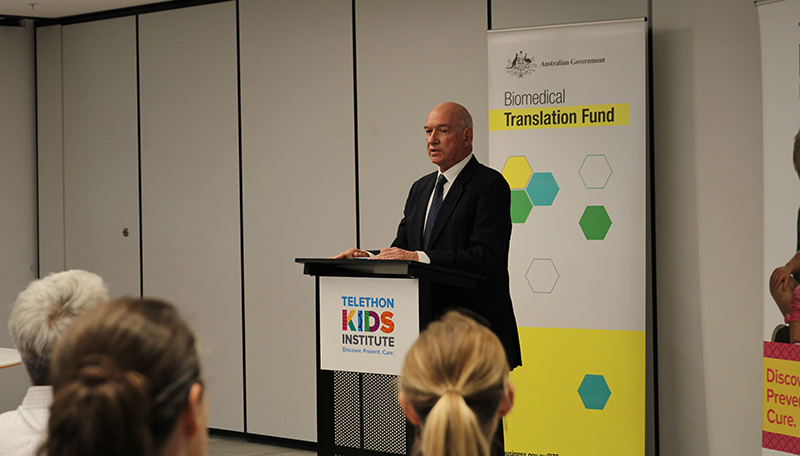 Respirion is developing a novel antibiotic therapy for the treatment of the life-threatening disease, Cystic Fibrosis (CF), combining an inhaled version of an approved drug that is normally used to capture and dispose of excess metals in the bloodstream with the standard of care antibiotic in a novel formulation and device.

MRCF BTF has committed up to AU$20M in stages in collaboration with the Telethon Kids Institute, where the technology was incubated and the spin-off created, and the Western Australian Department of Health where the product was tested.  An initial trial using the technology saw an average 16 per cent improvement in the lung function of patients, demonstrating the exciting potential of the treatment to improve CF patient’s quality and duration of life.

The MRCF BTF is a Federal Government-backed investment fund aimed at boosting Australia’s late-stage biotech sector. This is the MRCF BTF’s first investment in Western Australia.

The Cystic Fibrosis Foundation, based in the United States, has committed up to US$3M in funding to the development program. Clinical studies will be conducted in coordination with the CF Foundation Therapeutics Development Network, the largest CF clinical trial network in the world.  The CF Foundation is the world's leader in the search for a cure for cystic fibrosis, and nearly every CF-specific drug available today was made possible with their support.

“Cystic Fibrosis is a debilitating, genetic disease where persisting lung infections and progressive lung damage severely limit the quality and length of life of those with it,” says Dr Kath Giles, Respirion Director and Consultant with MRCF fund manager, Brandon Capital Partners. “Early signals from the initial patient study, and the broader scientific support for new antibacterial options, make this one of the most exciting therapies under development in this area.”

Most of the recent attention in CF drug development has focused on addressing the genetic abnormality which causes the proteins that regulate the proper flow of water and chloride in and out of cells lining the lungs to be defective.  While these new drugs have significantly improved outcomes for some CF patients with specific mutations, persistent antibiotic-resistant infections and declining lung function remain a problem for all patients.

Respirion’s therapy is a combination of the antibiotic tobramycin with an adjuvant which helps break down the biofilms that bacteria erect to protect themselves in the lung. In a recent clinical study, the combination not only significantly improved the killing power of the antibiotic, but also improved the patient’s overall lung function. Patients using the combination saw a 400 times greater reduction in bacterial load as well as an average 16 per cent improvement in lung function, compared to 5 per cent improvement for those patients using tobramycin alone. This demonstrates the broad potential of Respirion’s therapy and represents a powerful new tool to potentially not only improve treatment of infection, but also a CF patient’s quality and duration of life.

The MRCF has committed up to AU$20m to Respirion in stages, to support larger clinical studies that will take place under FDA regulations in the US and Australia. The MRCF’s investment is designed to validate the commercial and clinical potential for the therapy, kick start the initial studies and also potentially secure additional financial support for Respirion’s development program.

More than 70,000 people worldwide suffer from CF with approximately 1000 new cases of CF being diagnosed each year in the U.S. alone. Recent breakthroughs in CF therapy have extended the median survival age from around six years in the 1950s to more than 40 years today.  However, at this stage there is no cure and many lives are still cut short by the disease due to persistent lung infections and loss of lung function.

“Persistent lung infections and the inevitable decline in lung function remain urgent unmet needs in Cystic Fibrosis,” Respirion Founder and Director, Dr Barry Clements says. “My daily experience in treating Cystic Fibrosis patients for over thirty years at Perth Children’s Hospital, led me to the realisation that if we are to improve the reduction in bacterial load, and ultimately the fatal lung damage that occurs as a result of these infections, new approaches are imperative.

“We’re excited to be working with the MRCF, whose investment will help us make that critical step from research to the eventual clinical use of a potential treatment.”

Founded in 2018, Respirion Pharmaceuticals is an early-stage biotechnology company focused on developing new treatments for respiratory disease.  The company is a spinout from the Telethon Kids Institute in Perth where the technology was incubated. The company is developing the technology both in Australia and in the US. Respirion’s lead product, an inhaled therapy for the life-threatening disease Cystic Fibrosis, has shown promising results in an early clinical study carried out with the Western Australian Department of Health.  The company has partnered with Australia’s largest life science investment fund, the Medical Research Commercialisation Fund, which has committed up to AU$20M. The US Cystic Fibrosis Foundation has also committed up to US$3M to conduct further clinical trials in Australia and the US.

About the Medical Research Commercialisation Fund (MRCF) and Brandon Capital

About the Biomedical Translation Fund (BTF)

In 2016, the $500 million Biomedical Translation Fund was created by the Australian Federal Government as a once-in-a-generation initiative to make Australia a global leader in the commercialisation of biomedical discoveries.  The BTF combines $250 million of Commonwealth funding, matched by private capital secured by independent licensed fund managers to realise a substantial $500 million fund.

Brandon Capital Partners has been appointed to manage the $230 million MRCF BTF to invest in maturing technologies that have progressed to clinical studies.