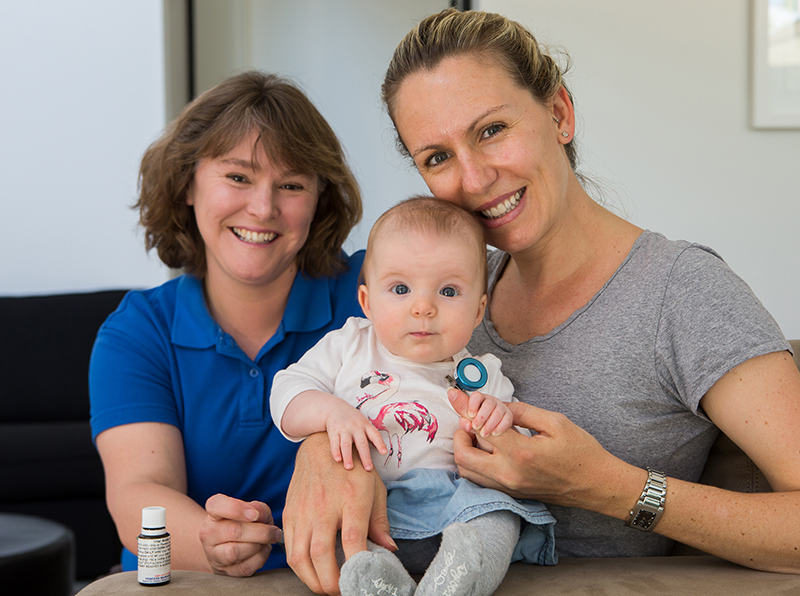 A study led by the Telethon Kids Institute has suggested vitamin D supplementation in babies is no match for sunlight when it comes to preventing eczema.

The study, published today in the top-rated Journal of Allergy and Clinical Immunology, set out to test whether early vitamin D supplementation in infants with a family history of allergy would make any difference to their development of eczema – an early hallmark of allergic disease.

Rather, it was those who had been exposed to direct sunlight who were more likely to avoid eczema.

“This suggests that vitamin D supplementation alone isn’t the answer, and that there are other ingredients at play that can only be obtained from direct UV exposure,” senior author Dr Debbie Palmer said.

Dr Palmer, Head of Childhood Allergy and Immunology Research at Telethon Kids, said a tendency towards greater sun protection over recent decades – combined with previous research linking low vitamin D levels to health issues including the development of childhood allergies – meant people had increasingly turned to supplementation to get their dose of vitamin D.

However this latest study added to a growing body of research which questioned the value of this approach in heading off allergic disease.

“There have been three major vitamin D supplementation trials in pregnancy over the last decade looking at allergy outcomes,” Dr Palmer said. “Like our study, they demonstrated little or no benefit. Our findings would appear to confirm that from an allergy point of view, at least, there’s more to the story than just giving vitamin D supplements.

“Our study is the first, however, to demonstrate an association between higher direct individual sunlight exposure in early infancy and less eczema development by six months of age.

“Our findings indicate that sunlight exposure appears to be more beneficial than vitamin D supplementation as an allergy prevention strategy early in life.”

Researchers were able to determine how much sunlight the babies had been exposed to thanks to dosimeters – wearable devices designed to record individual direct UV light exposure – which were worn by some of the babies across both groups.

“In addition to the eczema finding, lower UV light exposure was also associated with more inflammatory immune development in the infants by six months of age,” Dr Palmer said.

Co-first author Dr Kristina Rueter, a consultant paediatric immunologist at Perth Children’s Hospital and researcher at The University of Western Australia, said the results did not mean people should stop giving their babies vitamin D if it had been prescribed by their doctor.

“Vitamin D is very important for bone health, particularly in the growing infant, and the vitamin D level needs to be within the normal range,” Dr Rueter said.

“So if your baby has been advised by a doctor to take vitamin D supplements, continue, don’t stop. But in terms of allergies, our study suggests UV light exposure is going to be far more important.”

The researchers urged caution, however, in exposing babies to direct sunlight and said more work needed to be done to determine the right balance between sun-safe practices and beneficial UV exposure.

“We don’t have enough knowledge yet to translate this into a defined message,” Dr Palmer said. “We don’t know yet whether we can say put your baby in the sun for, say, five minutes, 20 minutes, or an hour, or what time of the day or whether the time of year matters.

“There’s a lot more work that needs to be done before we can translate this into a solid community message, but definitely from an allergy point of view, it’s opening up a really important area of research.”

Future research will look at a mother’s UV light exposure in pregnancy and how that may influence allergic disease and other outcomes.

The study included a total of 195 Western Australian infants with a family history of allergy – 97 of whom received vitamin D supplementation via daily oral drops, and 98 of whom received a placebo.

The paper – a collaboration with multiple institutions including the Perth Children’s Hospital and the School of Medicine at The University of Western Australia – can be read here.

A study led by the Telethon Kids Institute has suggested vitamin D supplementation in babies is no match for sunlight when it comes to preventing eczema.