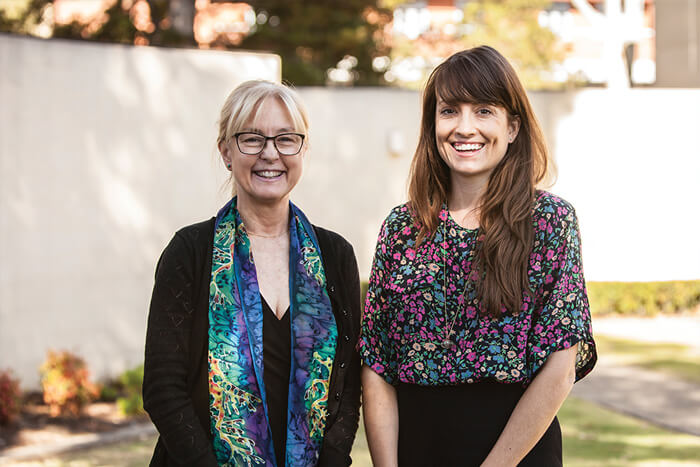 If there’s one thing modern researchers and health professionals now understand, it’s that for so many diseases and conditions affecting children and adolescents, early intervention is crucial.

Currently the diagnosis of such disorders depends on the assessment of behavioural symptoms that don’t start to emerge until 2-3 years of age. As a result, children are often not diagnosed until they reach school age – several years beyond the ideal window for intervention.

According to Telethon Kids researcher Dr Amy Finlay-Jones, being able to identify kids at risk of neurodevelopmental disorders as early as possible – between birth and two years of age – has the potential to make a significant difference to their developmental outcomes.

“That’s because this is a period of peak neuroplasticity, when babies’ brains are rapidly growing and forming new neural connections,” Dr Finlay-Jones said.

“We believe that being able to identify and provide support for kids and families during this time will give them the best chance of positive outcomes now and in the future.

“Waiting until kids are diagnosed when they’re five or six years old means we miss this critical window and it can be a very stressful and uncertain time for kids and their families.”

Enter Think Big, a BHP-funded research scheme initiated by the Telethon Kids Institute in 2017 to encourage researchers from different disciplines to work together to tackle bold and relevant questions around child health and development.

Just as importantly, the scheme aims to provide the structural support researchers need to get their ideas off the ground and successfully apply for a shrinking pool of research funding.

To win Think Big support, researchers had to come up with big ideas for new research programs that were highly collaborative, combined the expertise of the Institute’s diverse research teams, and were likely to have a high impact.

More than 20 big ideas were submitted, eventually coalescing into five formal proposals. Of these, two were chosen late last year to receive prioritised support in 2018 – $100,000 in seed funding per project, plus a shared project manager to help plan a formal research program and develop the large-scale grant applications needed to bring it to life.

A proposal led by Dr Finlay- Jones and fellow Telethon Kids researcher Associate Professor Jenny Downs, tackling the issue of early identification and intervention for kids at risk of neurodevelopmental disorders, was one of the two winning projects.

“We want to harness emerging research to find out how early we can identify kids at risk, so we can provide them with early supports that address their individual developmental needs,” Dr Finlay-Jones said.

“We also want to find out what happens for these kids over time – do they go on to develop a neurodevelopmental disorder? Do they stay in a generic ‘at risk’ category and not meet the criteria for a disorder, or do they get back onto a healthy developmental trajectory?”

Dr Finlay-Jones said the BHP-backed scheme gave the researchers a chance to pursue an area of research which might not get funded in traditional ways because of its pioneering nature.

“Most research in this area focuses on a specific disorder (such as autism), whereas what we’ll be doing here is looking across the broad category of kids with multiple forms of neurodevelopmental risk,” she said.

“This allows us to combine big data sets to see what we can pick up on in those early years, and develop early interventions that target individual profiles rather than broad diagnostic categories.

“We are confident that this is a really useful avenue of inquiry but we need this money in order to collect and synthesise the relevant data. We believe this will make us very competitive for future funding.”

Associate Professor Downs said one of the best things about the scheme was it brought together multiple researchers with specialist expertise in different areas, allowing them to combine their knowledge to work on this common and important problem. The project includes researchers from the Autism, FASD, and Child Disability research teams, as well as researchers working in immunology and precision medicine.

Associate Professor Downs said the $100,000 grant was a significant chunk of seed funding, while the addition of a project manager would help to keep the team on track.

“We think if we can develop this into a really big program of research it will completely revolutionise the way vulnerable kids can develop and build their future lives,” she said.

“It will change it from a situation where they’re either not diagnosed or misdiagnosed until they’re aged five or six, to a situation where we can identify kids at risk and start them on a track to healthy development in the very early childhood years.”

These research projects are supported by BHP Think Big Awards.

In 2017, we launched Think Big, the next phase of our research strategy. It’s all about big ideas, thinking outside the box and being innovative. Think Big brings together our research teams, collaborative networks of external researchers and health professionals, as well as consumers and community partners to develop ideas which could lead to large programs of research.

Two big ideas were chosen and with strategic funding from key partner BHP, researchers are bringing to life these bold ideas that could help solve some of the most pressing child health problems of our time.