Meningococcal disease is caused by the bacteria Neisseria meningitidis, or 'meningococcus'. It is an uncommon but very serious disease that can result in death if not recognised and treated quickly.

Meningococcal disease is caused by the bacteria Neisseria meningitidis, or 'meningococcus'. It is an uncommon but very serious disease that can result in death if not recognised and treated quickly.

Meningococcal disease can present as meningitis (infection in the fluid surrounding the brain), septicaemia (blood poisoning which can damage the organs of the body), or a combination of both.

While most people will recover from meningococcal disease, around 10% of cases are fatal, and between 10-30% of surviving children and adolescents are left with brain injury and/or deafness, severe scarring or amputated limbs.

Babies and young children less than 5 years old, teenagers and young adults have the highest risk of contracting meningococcal disease.

Symptoms in babies include fever, rapid breathing or panting, vomiting or difficulty feeding, irritability, lethargy or difficult to wake, unusual crying or moaning and the appearance of a spotty red-purple rash that looks like small bleeding points beneath the skin. It is very important to get this type of rash checked by your doctor promptly

There are 13 known variants, or serotypes, of meningococcus, although only 5 of these are known to cause disease - A, B, C, W and Y. The proportion of serotypes found in the community can vary depending on the season and location. MenC was previously the most common serotype seen in Australia, however recent data shows that 75% of meningococcal disease in Western Australia is now caused by MenW, followed by MenB and MenY.

The important feature of meningococcal serotypes is that they are just different enough to trick our immune system into thinking they are not the same bacteria. This means that if you have immunity to one serotype (e.g. MenC), you won't be protected against the other serotypes, and there is no single vaccine that protects against all serotypes of meningococcus.

Vaccination against meningococcus is the most effective way to prevent disease.

MenACWY in babies and young children
All babies are now offered a free Meningococcal ACWY vaccination against the A, C, W and Y serotype when they turn 12 months old. This replaces the infant MenC vaccine program introduced in 2003, which resulted in a marked decline in this strain of the disease but did not cover multiple strains.

The WA Government is also providing a free ‘catch-up’ MenACWY vaccine to children aged 1 – 4 years until the end of 2018. Parents should contact their local GP or Child Health Clinic to schedule an appointment for their child.

MenACWY in teenagers
The WA government has provided the MenACWY vaccine free to teens and young adults aged 15-19 thoughout 2017-2018. This age group is targeted because many cases of meningococcal disease occur in older teens and young adults, and by vaccinating the group who are more likely to carry the bacteria, it is expected that the majority of MenW type bacteria circulating in the community will be eliminated, reducing the risk of infection for everyone.

As of April 2019, the MenACWY vaccine will be added to the National Immunisation Schedule and provided free to all teenagers throughout Australia aged 14 – 19 years.

For more information about the MenACWY vaccination programs, please see the WA Department of Health.

The MenACWY vaccine can be purchased privately for those outside of the funded age brackets, please speak to your GP for further information. 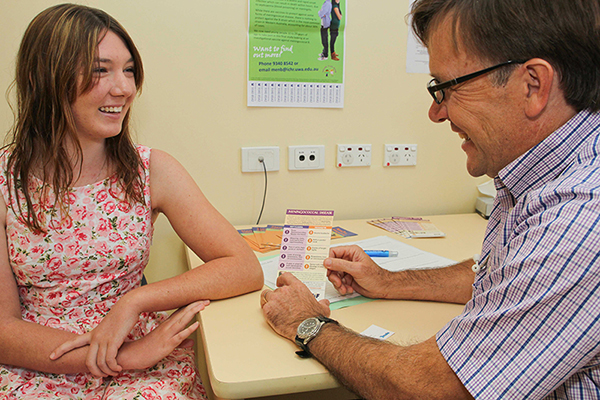 As a young resident medical officer working in the Emergency Department at Princess Margaret Hospital, I can still remember the first time I diagnosed a young baby with meningococcal disease.

What struck me was the rapid progression from being an unwell baby with a fever who was just starting to develop the typical bruising-type rash, to a severely unwell child needing life support in the Intensive Care Unit. Fortunately he survived and many years later I was lucky to meet the then teenager and his mother and reflect on what a close call it had been and the impact meningococcal disease had on their family.

The early signs of meningococcal disease were no different to the hundreds of other children we were seeing that winter with viral illnesses so I was always worried about missing the next case and often wondered why there were no vaccinations available for this terrible disease. There was no vaccine research happening in Australia but when I went to the UK a few years later, the Great Ormond St Hospital in London had been asked to run a trial of a new vaccine against the meningococcal C strain. This was the first time the vaccine had been given to humans and the first time I had run a clinical trial so it was a steep learning curve, particularly as there were no research nurses so I had to give all the vaccinations! Fortunately we had plenty of volunteers from hospital staff and the trial was a success. I was then asked to co-ordinate a research program evaluating the three meningococcal C vaccines available across the UK, and three years later this led to a national program for all children in the UK, followed by a similar program in Australia.

Both vaccination programs led to rapid elimination of disease caused by the deadly meningococcal C strain and showed me the power of vaccine research to have an immediate impact on the health of the population.

As it turned out, the meningococcal vaccine used in WA, including for my own four children, was the same vaccine that had started my career in meningococcal research.

My vision for the future is where we have a single vaccine that can protect babies, children and young adults against the five most common strains of meningococcal disease, and infections become so rare that training doctors will only read about it in textbooks rather than having to treat it in real life.