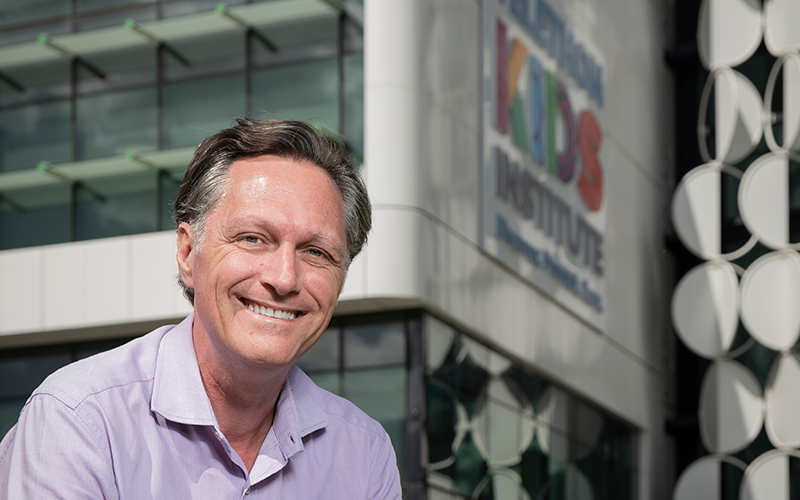 Telethon Kids Institute Executive Director, Professor Jonathan Carapetis AM, has been elected as a new Fellow of the prestigious Australian Academy of Science in recognition of his pioneering, paradigm-shifting expertise in infectious diseases.

Professor Carapetis – who is the world’s leading researcher in acute rheumatic fever (ARF) and rheumatic heart disease (RHD) and one of the world leaders in Group A Streptococcal disease (GAS) – is the only Western Australian among 22 new Fellows from around Australia announced today. The group will be formally admitted to the Academy during a special event in Canberra in November.

In its citation, the Academy noted that over his 30-year career, Professor Carapetis had constantly challenged existing scientific dogma and made world-first discoveries around GAS, ARF and RHD diseases, which affect more than 40 million people and kill more than 500,000 people globally every year.

His work – including his research proving the link between Strep A skin infections and ARF disease (rather than only Strep A throat infections, as had previously been thought) – has reshaped control of RHD globally, particularly among Australia’s First Nations people.

He has challenged existing paradigms, unearthed new approaches to working with disadvantaged populations, and influenced global policy, culminating in the 2018 World Health Organization Global Resolution on ARF and RHD.

The Academy noted Professor Carapetis’s work had transformed clinical practice and policy nationally and internationally, including through his leadership of the END RHD Centre of Research Excellence, which in 2020 produced the Endgame Strategy – a blueprint to eliminate RHD in Australia for good by 2030.

In addition, he had developed a new paradigm for how research organisations work through his 14 years leading two medical research institutes – the Menzies School of Health Research in Darwin (2006-2012) and the Telethon Kids Institute (since 2012) – and as President of the Association of Australian Medical Research Institutes (AAMRI, 2019-2021).

“His institutional and national leadership has defined a new blueprint for medical research institutes. Jonathan’s contribution to science is an exemplar for earlier career scientists who want to ensure that their research has impact,” the Academy noted.

The induction means Professor Carapetis is now member of two of Australia’s most prestigious scientific academies, after he was inducted as a Fellow of the Australian Academy of Health and Medical Sciences in 2014.

Professor Carapetis said he was deeply honoured to become a Fellow of the Australian Academy of Science.

“Being named an FAA is perhaps the highest recognition of scientific achievement by one’s peers in Australia, so I am very humbled and grateful,” Professor Carapetis said.

But science is never done by one person alone – there are many colleagues and collaborators who have equally contributed to my career’s work and should share in this acknowledgement.

“I hope this recognition will help to shine a light on the problem of RHD in our First Nations people and in many countries around the world, as well as to the solutions – clearly outlined in the Endgame Strategy – that now need to be implemented.

“I look forward to contributing to the great work of the Academy of Science in years to come, as it ensures that Australia’s future is one that embraces as well as learns from science.”

Professor Carapetis holds a clinical position with Perth Children's Hospital and is a Professor at the University of Western Australia and Head of the Telethon Kids Institute Strep A and Rheumatic Heart Disease Team.

Among his many accolades, in 2021, Professor Carapetis was made an Honorary Doctor of Medicine by Curtin University and was the recipient of the Professions Award at the 2021 Western Australian of the Year Awards.

In 2018, he was made a Member of the Order of Australia (AM) for his significant contribution to medical research.

About the Australian Academy of Science

The Australian Academy of Science was founded in 1954 by Australian Fellows of the Royal Society of London, with the distinguished physicist Sir Mark Oliphant as founding President.

Following the election of this year’s new Fellows, the Fellowship now stands at 590 Fellows.

The 2022 new Fellows will present their work and achievements at Science at the Shine Dome on 23 November – the Academy’s annual flagship event where Australia’s most influential scientists gather to celebrate science and to honour outstanding achievements in science.

Find out more about criteria for ordinary and special election to the Academy and how to nominate a scientist for fellowship.

For more information on the latest fellows, see here.