Two Telethon Kids Institute researchers recognised for their role in building a global database for an extremely rare genetic condition are now helping to set the scene for clinical trials of much-needed potential treatments. 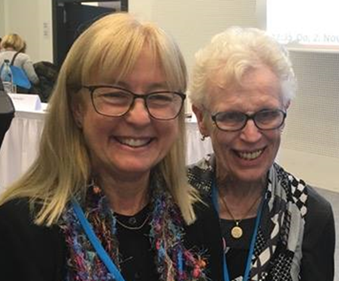 Head of Child Disability, Associate Professor Helen Leonard, who helped to identify CDKL5 deficiency disorder in 2004, and Associate Professor Jenny Downs, Program Head of Child Disability, were named Champions of Progress at the 2020 CDKL5 Forum – an annual symposium run by the UK-based Loulou Foundation and attended by leading CDKL5 researchers from around the world.

Associate Professor Leonard was part of an Australian scientific team which in 2004 first identified that CDKL5 – originally thought to be an atypical form of the better-known neurodevelopmental disorder, Rett syndrome – was a distinct disorder. The finding was made after the team pinpointed mutations in the CDKL5 gene in a family with three affected children.

In 2012, Associate Professors Downs and Leonard established an international database of families with the condition, creating a vital pool of evidence which continues to inform research into the disorder. Now, they are part of an international team of researchers awarded US$5 million by the prestigious National Institutes of Health (NIH) to establish critical outcome measures required before clinical trials of potential treatments can go ahead.

Associate Professor Leonard, who first encountered a child with the disorder in the 1990s and is now regarded as an international expert on CDKL5, said only a handful of Western Australian children are known to have the condition.

“CDKL5 is extremely rare, affecting around 1 in 40,000-60,000 children born across the world every year,” she said. “It usually presents within the first three months of life – sometimes as early as the first week.

“Babies with the disorder start getting seizures and they just don’t stop – they’re difficult to control and cause severe disability.”

Most children with CDKL5 cannot walk, talk or feed themselves, and nearly three quarters of those affected are confined to wheelchairs. Many experience severe intellectual disability, scoliosis, gross motor delay, vision problems, sensory difficulties, and gastrointestinal problems. Eighty per cent of those affected are girls.

“We’ve only known about CDKL5 for about 16 years – up to that point it was thought to be a form of Rett syndrome,” Associate Professor Leonard said. “But then we looked at it more closely and in 2004 Telethon Kids was part of the first group to identify it as a separate entity, with its own characteristics.”

Since then CDKL5 has become an important research focus for the Child Disability team. However, Associate Professor Leonard said that because of its rarity it was essential to study the condition on a global scale in order to find answers.

“To help this happen, in 2012 Jenny and I established an international database which collects genetic and other information from affected families worldwide, and which has since become a major source of clinical information about CDKL5,” she said.

There are now more than 330 families from more than 40 different countries registered to the database. Over the past five years it has become a rich resource, providing the precious data needed to inform future clinical trials of potential treatments.

“Given the severity of this disease, families are desperate for genetic treatments and we are hoping these are on the horizon,” Associate Professor Downs said.

“But you can’t hold clinical trials without having clinical outcome measures. These are measurable changes in health, function or quality of life which help to demonstrate the efficacy or otherwise of the treatments under consideration. At the moment, those measures simply don’t exist.”

“By refining and validating appropriate outcome measures, we’ll be contributing in a vital way to clinical trial readiness, so that when the time comes to properly evaluate the therapies currently in development, everyone is ready to go,” Associate Professor Downs said.

“This is a major milestone which takes us one step closer to giving families viable treatment options and we’re honoured to be a part of such an important collaboration.”

Roisin Carbery suffers from a rare genetic disorder which causes her to have multiple seizures a day. Watch this story to learn what Telethon Kids Institute researchers are doing to help kids like Roisin.