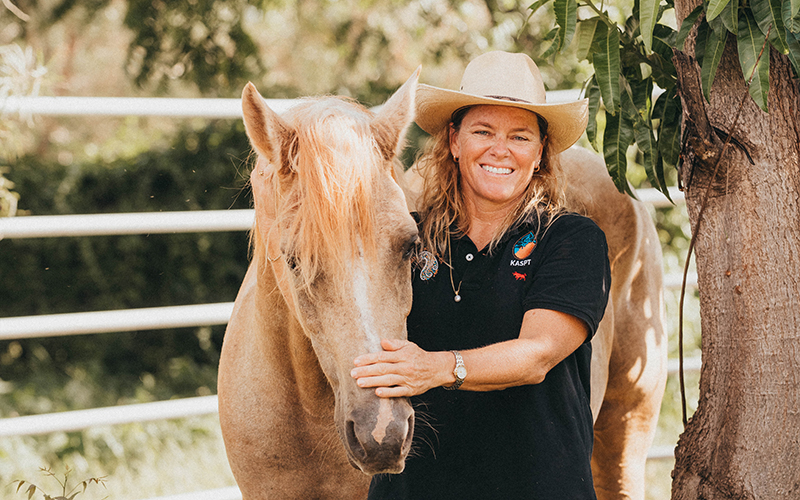 A trail-blazing Aboriginal-led program which uses equine-assisted learning to address the urgent needs of young Aboriginal people across the Kimberley has been given a major funding boost, thanks to a generous grant from Healthway.

The program capitalises on the strong historical ties between Aboriginal people and horses, as well as connection to country and culture in the Kimberley, to deliver an Aboriginal-led and operated EAL intervention aimed at enhancing the social and emotional wellbeing of Aboriginal young people and building leadership skills.

“EAL is an experiential learning approach that offers individuals an opportunity to learn about life and relationship skills through safe interactions with horses and guided self-reflection, promoting emotional learning and growth,” Professor Coffin said.

“It is a different approach to traditional talk-therapies that rely on verbal exchanges between individuals and health professionals. EAL emphasises learning from horses in relation to body language, behaviours, and (re)actions rather than talking.”

The three-year project – developed following a successful one-year pilot in WA’s Midwest region – will receive $419,985 over three years from Healthway.

Professor Coffin said recent figures on Aboriginal children and young people revealed unacceptably high rates of self-harm, problematic alcohol and substance use, disengagement from school, and over-representation in both the out-of-home care and youth justice systems.

“Aboriginal youth may not access mental health services in Australia due to a lack of culturally secure programs, with existing services being unsuitable to their needs.”

Professor Coffin said there was a strong need and desire within Aboriginal communities for culturally secure programs on country which were strengths-based and focused on building healthy coping skills among Aboriginal young people.

International studies have shown promising results from equine-assisted learning, and parents and teachers of 270 Aboriginal young people involved in a 2015 pilot of the approach, designed and delivered by Professor Coffin in Geraldton, noted improvements in self-regulation, self-awareness, and socialisation skills.

“Feedback from young people suggested EAL is culturally appropriate and preferred over the room-based interventions they had previously experienced,” Professor Coffin said.

“Yawardani Jan-ga scales up the pilot project to explore the effectiveness of EAL in the Kimberley region – a setting where there is demonstrated need for more innovative programs.”

Professor Coffin said that given the broad applicability of EAL interventions, Yawardani Jan-ga had the potential to help develop the local workforce with Aboriginal-led and run initiatives and outcomes which could really make a difference for Aboriginal young people and communities.

“It also offers opportunities to identify and strengthen leadership skills, and build participants’ capacity and confidence to communicate and influence others,” she said.

“This program has also been really well received by the broader community, including service providers, and fills a critical gap in the Kimberley by providing a non-acute culturally secure service that addresses the complex constellation of cognitive, emotional, and behavioural issues experienced by local Aboriginal youth.”