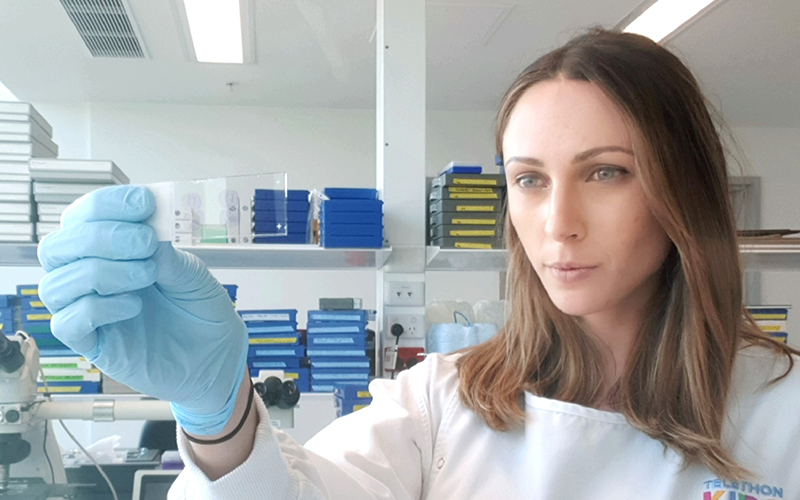 A Telethon Kids Institute researcher aiming to reduce the high rate of relapse in children after cancer surgery has won a prestigious post-doctoral fellowship from the Forrest Foundation.

Telethon Kids Institute and The University of Western Australia (UWA) researcher Dr Rachael Zemek was one of only 13 early career researchers to be awarded new Forrest Foundation Prospect Fellowships, for her project, “The wound healing response in cancer: exploiting the biological effects of surgery for therapy.”

“It is often not possible to remove all cancer cells surgically, with some cells remaining behind in the wound bed,” Dr Zemek said.

“Although surgery has been performed in cancer for centuries, surprisingly little is known about how the wound healing environment impacts the cancer and changes the immune response.

“In this project I plan to comprehensively characterise, for the first time, the effect of surgery-induced wound healing on cancer cells and the local immune microenvironment with the aim to develop therapeutic approaches to prevent relapse of sarcoma after surgery.

“My end goal is to develop therapies that can replace the need for chemotherapy altogether.”

Sarcoma is the third most common cancer in children and young people and despite aggressive treatments like surgery, chemotherapy and radiotherapy, around 50 per cent of patients relapse. Of those who relapse, two-thirds will eventually die from the disease.

Dr Zemek – a post-doctoral researcher specialising in cancer immunotherapy at the Telethon Kids Institute, who will take up the fellowship through UWA – said the project would make use of the strong research linkages that exist in Western Australia.

“As part of the Sarcoma Translational Research group within the Cancer Centre at the Telethon Kids Institute, I will work in the only paediatric centre in Australia focused on immunotherapy,” she said.

“I will also have access to the ACRF Centre for Advanced Cancer Genomics and Pawsey, the most powerful supercomputer in the southern hemisphere.

“This project will look at gene expression data collected over a time-course to identify dynamic processes, analyse immune cells for their anti-tumour immune response and use computational methods to identify druggable targets and repurposed drugs.”

Dr Zemek is the second researcher from the Telethon Kids Institute’s Cancer Centre to be awarded a Forrest Fellowship in just two years. Dr Jessica Buck was awarded a fellowship in 2019 to investigate innovative new therapies for children with brain cancer.

The Forrest Foundation’s Prospect Fellowships were open to applicants from any discipline who were among the top 5% of graduates in their area.

The scholarship provides support for post-doctoral researchers who will focus on one of six key areas identified as promoting WA’s comparative advantage and relevance.