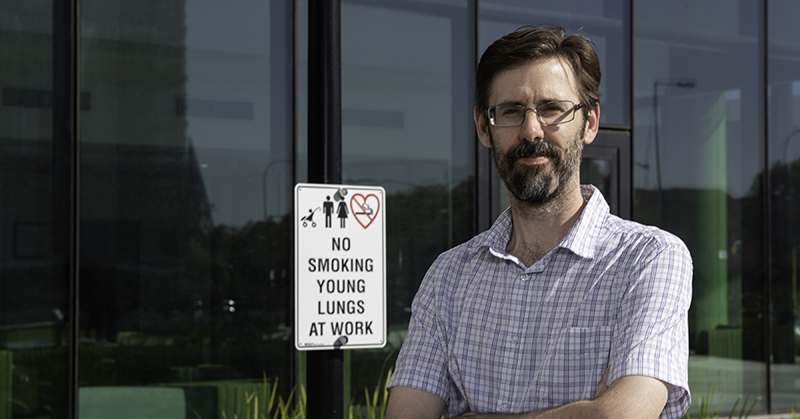 Women who are pregnant or who think they could be have been urged to avoid using e-cigarettes, due to lack of evidence about their safety, according to a viewpoint article published in leading medical journal, The Lancet Respiratory Medicine.

E-cigarettes researcher Associate Professor Alexander Larcombe, Head of Respiratory and Environmental Health at Telethon Kids and part of the School of Public Health at Curtin University, was invited to write the article giving his view of the current state of evidence about e-cigarettes and their potential impacts on women and children during pregnancy and early childhood.

Dr Larcombe said many people believed that ‘vaping’ with Electronic Nicotine Delivery Systems (ENDS), or e-cigarettes, was either safe or at least far safer than tobacco smoking during pregnancy, however the lack of detailed research into the subject meant this belief could not be supported.

“There is this general perception that it’s either orders of magnitude safer or completely safe to vape during pregnancy, which is completely unfounded and almost certainly not true, because women and babies are still potentially getting exposed to nicotine and other potentially harmful chemicals,” Dr Larcombe said.

“So if a pregnant woman is thinking of switching to e-cigarettes instead of smoking, which the evidence shows a lot of them are, the outcomes may be just as bad. We just don’t know.”

Dr Larcombe said e-cigarette usage was increasing in Australia and around the world, with people aged between 18-39 – including women of child-bearing age – Australia’s largest user group.

“My concern is we just don’t know what the effects are on the unborn baby,” he said.

“The literature suggests that it is the nicotine in traditional cigarettes and in nicotine replacement therapy that has the greatest impacts on an unborn baby’s health. We know that nicotine impacts brain development, so it affects the behaviour, memory and learning of the child. It also affects lung growth and development and affects the range of other organs in a negative way as well.

“That fact that people may be using e-cigarettes with nicotine during pregnancy probably means that those children are also going to have their health impacted.”

Recent research by Dr Larcombe and colleagues found six out of 10 ‘nicotine-free’ e-cigarette liquids purchased over the counter and online in Australia contained nicotine as well as an acutely toxic chemical typically found in pesticides and disinfectants.

All 10 samples had been labelled ‘nicotine free’. The nicotine found in three of the samples was at levels comparable to those found in low-dose nicotine e-liquids; and at trace levels in the other three samples in which it was present.

In the Lancet article Dr Larcombe noted the common misconception that e-cigarettes do not produce second-hand exposures, and that they are non-toxic.

“With respect to second-hand exposures a proportion of inhaled aerosol is exhaled into the surrounding environment, posing a health risk to those involuntarily exposed, including children,” he said.

“There is a misconception that ENDS aerosols (particularly second-hand aerosols) are non-toxic and consist mostly or entirely of water vapour, which may lead to parents using ENDS around their children more readily than they might smoke tobacco cigarettes.”

He said this misconception may stem from the use of the term ‘vaping’, when actually ENDS produced a suspension of fine liquid droplets, known as an aerosol.

“Water is not a common ingredient in e-liquids and water vapour generally makes up only a small proportion of ENDS aerosols, which typically contain propylene glycol, glycerine and a variety of potentially toxic chemicals including volatile organic compounds, tobacco-specific nitrosamines, metals and particulate matter,” Dr Larcombe said.

He said the composition of ENDS aerosols and the amount exhaled could vary significantly, depending on the e-liquid ingredients, the device, and the way the device was used.

“What is needed now is a lot of research – we really don’t know the answers to a lot of the questions that people are asking about e-cigarettes.

“Our ongoing research, looking at e-cigarettes both with and without nicotine in them, is attempting to answer some of these questions.

“My recommendations in this area are that if you are pregnant or think you could be pregnant – don’t smoke and don’t use e-cigarettes.”