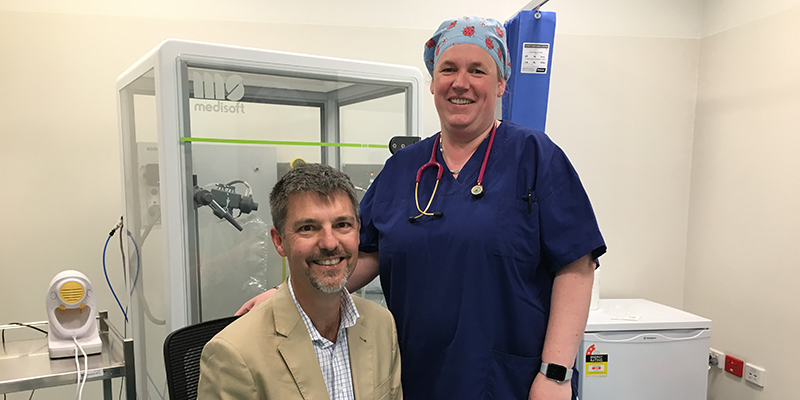 A world-first Perth study has shown that two puffs of an over-the-counter asthma medication before surgery can reduce respiratory complications during and after tonsillectomy surgery in children.

Lead researcher and PCH anaesthetist Professor Britta Regli-von Ungern-Sternberg said tonsillectomy was one of the most frequently performed surgical procedures in children.

“In Western Australia, tonsillectomy is a common operation in children and up to half of those having this procedure will experience breathing problems at some stage during or after the procedure,” Professor Regli-von Ungern-Sternberg said.

“Although most of these complications are minor, such as easily managed airway obstructions and mild desaturations, others can be more serious and have long-term effects.”

“This clinical trial showed that children who had two puffs of the asthma medication, commonly known as Ventolin, before tonsillectomy surgery had a clinically significant reduction in respiratory complications compared to those who didn’t have Ventolin,” she said.

Of the 241 children randomised to receive Ventolin, 67 had respiratory complications (27.8%), compared to 114 of 238 who received the placebo (47.9%). Laryngospasm, coughing, and oxygen desaturation each occurred significantly more often in the placebo group.

"This study will change the way children getting tonsillectomies are managed,” Professor Hall said. “We demonstrated a simple, effective solution that helps to greatly reduce breathing problems during surgery.

“It’s possible that Ventolin could also be beneficial for children having other types of surgery and more research is needed in this area.”

"The Children's Lung Health team at Telethon Kids was excited to be able to collaborate with clinicians and researchers at Perth Children's Hospital, Curtin and UWA to help improve outcomes in kids having surgery," he said.

This clinical trial was funded by the Perth Children’s Hospital Foundation and an Australia and New Zealand College of Anaesthetists (ANZCA) project grant.