People power takes tiny study to the next level 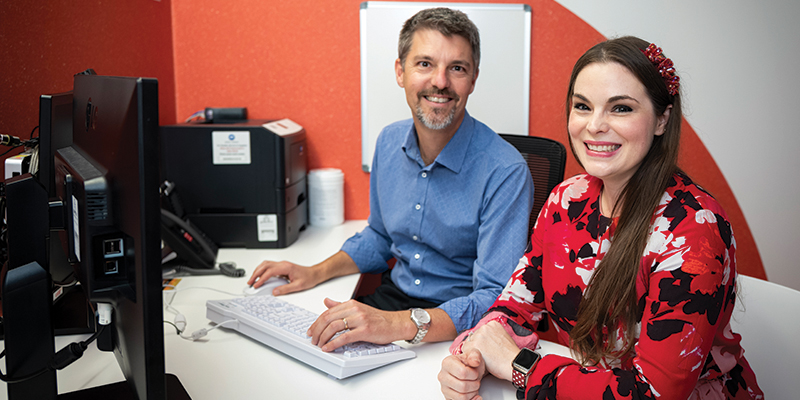 One of the biggest problems facing young people with neuromuscular disorders is the risk of breathing problems caused by muscle weakness during sleep.

The resulting hypoventilation – breathing at an abnormally slow rate, leading to increased carbon dioxide in the blood – can eventually lead to lung failure, the most common cause of death in people with neuromuscular disease. It’s a problem Telethon Kids Institute researcher and Perth Children’s Hospital respiratory paediatrician Dr Adelaide Withers would dearly love to solve.

In 2016, thanks in large part to a scholarship from Muscular Dystrophy WA, she began a Masters project aimed at better understanding, predicting, and ultimately preventing hypoventilation.

Her pilot study, Clinical Predictors of Respiratory Failure in Paediatric Neuromuscular Disorders, is working with 37 children and young people from across WA who have neuromuscular disorders, including Duchenne muscular dystrophy and Spinal Muscular Atrophy, to identify early markers of hypoventilation.

“If we can identify the onset of hypoventilation earlier, we know that there’s effective treatment,” Dr Withers said. “It’s very well shown that using non-invasive ventilation improves not only quality of life but reduces morbidity and mortality and prolongs kids’ lives.”

“I figure if I can pick this up earlier and treat it as early as possible I know I’m going to be improving the quality and the length of the life of my patients, which is all I want to do. That’s why I come to work every day.”

Designed as a 12-month project involving overnight sleep studies, lung and motor function tests, and quality of life questionnaires, results so far from the pilot study – helped by a high level of engagement from participant families – have been so good they’ve spawned two bigger projects amounting to a five-year program of research into respiratory outcomes for neuromuscular disease.

The first, funded by the Duchenne Parent Project in the Netherlands and led by Telethon Kids Head of Children’s Lung Health, Professor Graham Hall, is a two-year study monitoring respiratory outcomes in boys with Duchenne muscular dystrophy.

Together with the initial results from Dr Withers’ pilot, the protocols from that study have in turn provided the basis for a five-year, $1.6 million National Health and Medical Research Council grant. This will broaden the scope of Dr Withers’ original study and adds a US cohort into the mix, thanks to a collaboration with Stanford University and the Lucile Packard Children’s Hospital in Palo Alto.

Professor Hall said the overlapping projects were a great example of how working closely and openly with consumers and community members could take a piece of research to the next level.

“Initially we thought we’d have to scale back the project because the burden would be too high,” Professor Hall said. “But the neuromuscular community said, ‘We recognise this will be hard yakka but if this means we’ll never have to do this again and that we’ll get better treatment, please go ahead.'”

“Since then the project has only continued to grow, with the neuromuscular community reference group heavily involved at every stage and helping to shape our protocols and research questions in significant ways.”

Dr Withers said this had included a novel shift to in-home sleep studies, in response to participant concerns about the disruption of having to spend the night in hospital.

“We’re very conscious of minimising the burden for these families, as they’ve often already got such a high burden because their children are often severely disabled,” she said.

“So, when they told us that they hate having to come in to do sleep studies, we decided to try home sleep studies instead. Part of the NHMRC project will involve comparing home and in-lab sleep studies, which will be a lot more pleasant for the patients – and we probably wouldn’t have looked at that if it hadn’t been for the community reference group.

“They’ve been incredibly committed to this research and really important in helping us steer the direction of what we do.”

This research is supported by Muscular Dystrophy WA and the Duchenne Parent Project in the Netherlands.