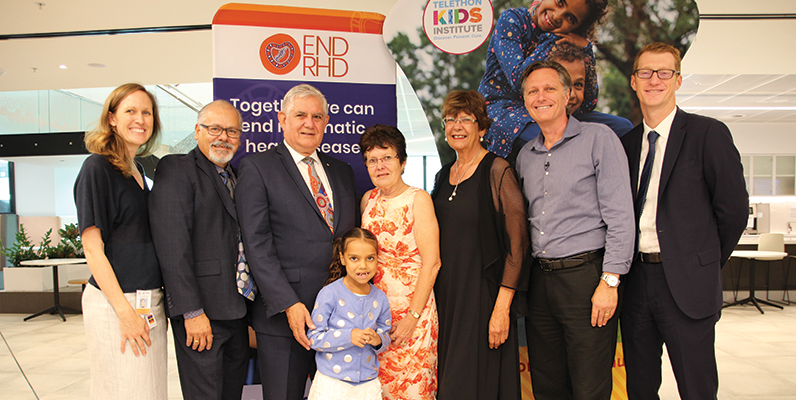 It's been a huge year for those working to eliminate rheumatic heart disease (RHD), with breakthroughs including $35 million in funding to develop a Strep A vaccine, a bipartisan commitment to tackle the disease, and a national roadmap for action combining to mean we’ve never been better placed to end RHD, once and for all.

Rheumatic heart disease (RHD) is a preventable disease that should no longer exist in a country as wealthy as Australia. Yet it does, affecting Aboriginal and Torres rates in the world.

Starting from a Strep A infection of the skin or throat, when left untreated RHD can be fatal. Even with careful management – usually monthly antibiotic injections for at least ten years – it is still life-shortening. In fact, in Western Australia’s Kimberley region, the average age of death from those living with the disease is just 41 years old.

But with a commitment from both major political parties, a global mandate from the World Health Assembly to prioritise ending the disease globally, the beginnings of a national RHD Roadmap, and a Strep A vaccine in the works, Telethon Kids Director and leading RHD researcher Professor Jonathan Carapetis believes the idea of ending the disease is finally starting to become a reality.

“In my 25 years working on RHD, I have never felt more confident that the end is in sight for this disease, which for too long has been a national shame for Australia,” Professor Carapetis said.

Driving the momentum is END RHD, an alliance of peak bodies of which Telethon Kids is a founding member and Professor Carapetis is Co-Chair.

“What’s exciting about END RHD is that it’s the first time that the research, advocacy, and Aboriginal Community Controlled Health sectors have come together with one voice to say: RHD needs to end, and this is how,” Professor Carapetis said.

Australia: guaranteed Aboriginal leadership; targets to track progress; an RHD roadmap to bring together all relevant government departments and stakeholders; funding for community-led activities; and investment in research. This past year, END RHD has seen huge progress towards achieving these goals.”

In late 2018, END RHD was commissioned to write a draft RHD Roadmap by the Commonwealth Department of Health. Tabled at the Council of Australian Governments (COAG) Health Council meeting in March this year, it has now been progressed to the Australian Health Ministers’ Advisory Council (AHMAC), to be reported back to the COAG Health Council in November.

In February 2019, further progress towards achieving the priority asks was made when $35 million in federal funding was awarded to Telethon Kids to lead a national consortium to develop a Strep A vaccine – a development Professor Carapetis described as an absolute game-changer in the fight to end RHD.

“Not only will a Strep A vaccine help us end RHD, it has the potential to save over half a million lives globally by preventing other Strep A-related diseases as well,” he said.

“As part of the Global Strep A Vaccine Consortium we have been working collaboratively with organisations across the world towards developing a safe, globally effective and affordable Strep A vaccine - and this funding will continue to position Australia as a leader in this space.”

With the release of the RHD Endgame Strategy – bringing together more than five years of collaborative, community-driven research from the End Rheumatic Heart Disease Centre of Research Excellence (END RHD CRE) – due at the end of this year as well, Professor Carapetis said there would be no unanswered questions about what is needed to eliminate RHD in Australia.

“We have the foundations to eliminate this disease: Aboriginal leadership, growing political will, and world-class research. With all of this on our side, there is absolutely no reason why we can’t consign this disease to the history books once and for all,” Professor Carapetis

In late 2018, the END RHD CRE released The Cost of Inaction on Rheumatic Heart Disease which found:

There were more than 4,500 Aboriginal or Torres Strait Islander people in Australia living with RHD or its precursor, acute rheumatic fever.

The Bupa Foundation supports the END RHD Communities Project – a community-led, research-backed approach to tackling rheumatic heart disease in remote Aboriginal Communities – which is a critical piece of work informing the development of the RHD Endgame Strategy.