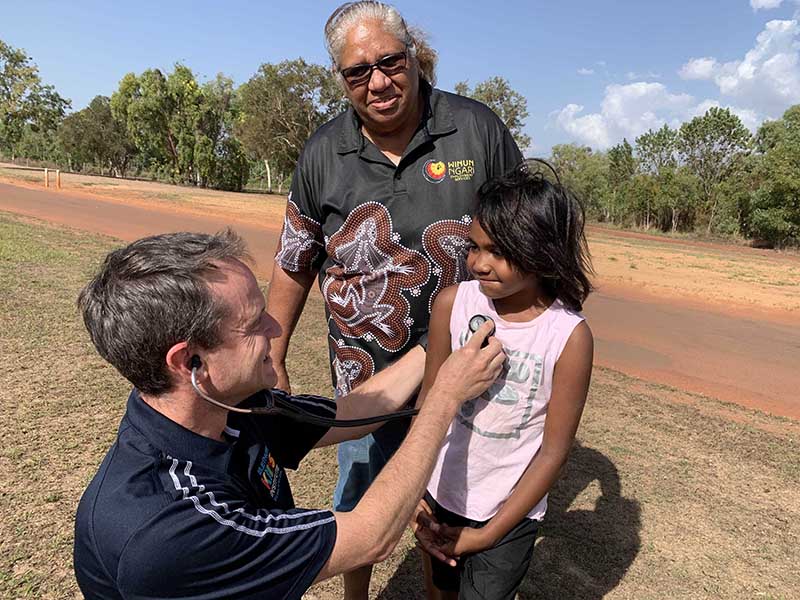 Telethon Kids Institute and Perth Children’s Hospital clinician-researchers have found more than one in ten children across four remote Kimberley communities have protracted bacterial bronchitis (PBB), a condition that can lead to progressive, irreversible, and life-shortening lung disease.

PBB is a low-grade bacterial infection on the inside of the airways that is typically characterised by a chronic wet cough.

“If a child has a wet cough that lasts more than four weeks, there’s a very high chance that child has PBB,” researcher and paediatric respiratory physician Dr Andre Schultz said.

“It doesn’t always make the child very sick overall, so they may look healthy while having a wet cough, but if you leave it, it eats away at the inside of the lungs and the airways become wider and wider and can eventually end up with big holes in them. By this point, the damage is irreversible.”

Dr Schultz and respiratory physiotherapist Pam Laird, both clinicians with Perth Children’s Hospital as well as researchers at Telethon Kids, grew concerned when they noticed many of the children they were seeing while holding respiratory clinics in WA’s Kimberley region were presenting with chronic wet cough.

“If chronic wet cough is identified and treated early, disease progression can be halted – however we’ve found wet cough has become normalised, partly because it’s so common,” Dr Schultz said.

“People don’t realise it could be a serious health problem. Until recently, the long-term risks were not clearly understood, so it has typically not been looked for or picked up as often as it should be and many kids aren’t getting the treatment they need.”

The duo began working with Kimberley communities and Aboriginal health services to raise awareness but realised that if the issue was to be tackled properly, it was essential to obtain firm evidence about how common it was.

“There’s generally not a lot of information about on the prevalence of PBB and bronchiectasis, which is the more serious lung disease chronic wet cough and PBB can lead to,” Dr Schultz said. “Until now the best estimates have been out of central Australia, where respiratory physicians conducting clinics with children estimated about 1.5% of children had bronchiectasis.

“Those were fairly rough figures, however, and there was no way we could know whether they reflected what was going on in WA.

“To get a better picture, we worked with four remote communities in the North West to recruit and medically assess almost every single child aged under the age of seven years, giving us a very high degree of accuracy.”

“These figures are concerningly high – much higher than most people would have expected,” Dr Schultz said. “Can you imagine, 10% of children in a community have a condition that’s going under-recognised, undetected, untreated, and which may shorten life? We need to do something about it.”

Dr Schultz said diagnoses of bronchiectasis were increasing globally, largely because more medical professionals were looking for it. However, in many cases diagnosis was delayed by years or even decades, when it was too late to reverse any damage.

“We don’t have to wait,” Dr Schultz said. “It’s relatively easy to pick up chronic wet cough early, manage it correctly, and stop PBB from progressing to an irreversible, permanent condition. When the children we saw got into clinic and got the right treatment, they got better – and some of them had been coughing for almost a year.

“People just have to know what to look for and how to manage it and we need clinicians to be aware of it.”

Dr Schultz said there was anecdotal evidence to suggest the problem was not confined to remote Aboriginal communities and could affect people in other parts of WA and Australia.

“We’ve heard from clinicians all over Western Australia, including Albany, Esperance and Bunbury, that chronic wet cough could be more of a problem in their area than had been suspected,” he said. “Potentially it’s a nationwide problem, but unfortunately until you have proven it you don’t know, so the aim is to take this wide and get a much better understanding of how common this is.

“We’re very motivated to address PBB wherever it may exist, particularly to get information and strategies out there for families and primary care clinicians, so families seek help, clinicians know how to respond when they do seek help, and children can get the treatment they need.”

Dr Schultz recently received NHMRC funding of $1.43 million to work with collaborators in the Northern Territory and Queensland to prevent permanent disease in children with chronic wet cough.

*The research, Prevalence of chronic wet cough and protracted bacterial bronchitis in Aboriginal children, was published in the European Respiratory Journal Open Research and can be read here.