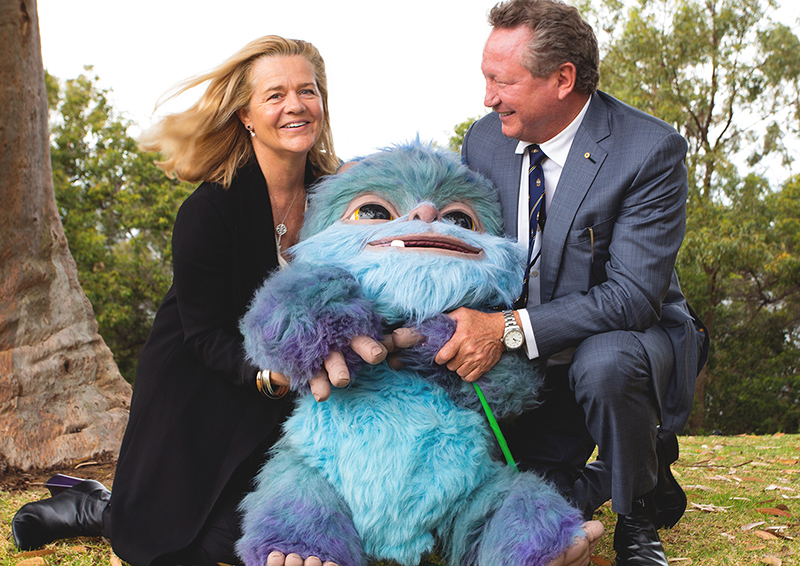 Nicola and Andrew Forrest with the puppet

A national campaign launched on Channel 7’s Telethon aims to build community understanding of the amazing untapped potential of a baby’s developing brain, through a remarkable animated creature.

The innovative campaign “Bright Tomorrows Start Today” has been developed by CoLab, a partnership between the Minderoo Foundation and the Telethon Kids Institute and is underpinned by the latest child development science.

An animated puppet, which represents the developing brain of a young child, launches onto TV screens this weekend, offering parents and carers an insight into the remarkable receptiveness and learning capacity of the infant brain, which develops over one million neural connections every second.

“This magical creature, which you can’t help but love, demonstrates the potential of the growing brain, and the critical impact early interactions can have on a person’s life,” said Chief Executive of the Minderoo Foundation, Nicola Forrest.

“It’s a fun way to learn more about the parts of early childhood development that might not always be apparent to us, but which science shows are more important than any other period of development in a person’s life.”

“A baby’s brain doubles in size in the first year of life, and by age three it has reached 80 percent of its adult volume,” said Professor Cross.

“For many years, people believed babies’ brains were like sponges that absorbed what was happening around them, but research tells us babies’ brains are developed by the repetition of meaningful moments.

“We have an opportunity as an entire community to help build our babies brains to ensure they have the best possible start to life.”

This first campaign is intended to be the first instalment of an ongoing, national campaign – the message development of which is being guided by US-based social research organisation FrameWorks.

Nicola Forrest said the initiative was designed to raise the profile of early childhood development as an issue of collective concern and policy significance.

“If we want to prevent serious social issues, we must start as early as possible – from birth, if not before,” said Ms Forrest.

“Healthy, happy kids are crucial to a strong future for our nation. Brain development that occurs in the early years, provides the foundations for social and emotional regulation, literacy, numeracy and health later in life.”

Bright Tomorrows Start Today was developed by creative agency 303 MullenLowe and production company Siamese. It would not have been possible without the stars of the campaign, the creature, and 8-month-old twins Rory and Lewis.

CoLab is a partnership between Telethon Kids Institute and the Minderoo Foundation which unites the expertise of families, policymakers, clinicians, educators, practitioners and researchers, to work together to improve the learning and development of children and reduce inequality.

About the Minderoo Foundation

Minderoo was established by Nicola and Andrew Forrest in 2001 based on the mandate to give a hand up, not a hand out. Since establishment the Foundation has committed $645m to a wide range of causes – from ending modern slavery to improving the lives of Australian children - and worked with over 250 partners in Australia and beyond.