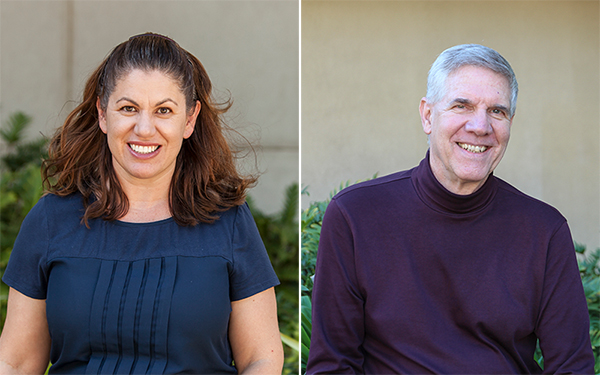 Telethon Kids and University of Western Australia researcher Professor Stephen Zubrick is a finalist in the Scientist of the Year category for his pioneering work in the area of child and adolescent development and mental health. A leading developmental scientist, Professor Zubrick has designed and led some of Australia’s most important longitudinal surveys into the development of children and adolescents. His work has transformed what is known about child and adolescent mental health disorders in Australia and created a critical evidence base which has influenced state and national government policy, services and health promotion strategies.

Telethon Kids and UWA researcher Dr Melissa O’Donnell is a finalist in the Woodside Early Career Scientist of the Year award for her internationally recognised research in the area of child abuse and neglect. Her research is improving the understanding of factors that increase vulnerability to child maltreatment, resulting in changes to policy and practice and contributing to the international monitoring of child abuse and neglect. Knowledge gained from her research has shaped the Western Australian Department of Communities’ Building Safe and Strong Families: Earlier Intervention and Family Support Strategy 2016, and the Legislative Review of Western Australia’s Children and Community Services Act 2004.

Telethon Kids Institute Director, Professor Jonathan Carapetis, said the recognition of both as finalists in the prestigious Premier’s Science Awards reflected the significant contribution each had made to improving outcomes for some of Australia’s most vulnerable children and adolescents.

“Steve, who has been with the Institute since its very beginning, has dedicated his career to increasing our understanding of the development of children and young people,” Professor Carapetis said.

“He and his teams have done this via the visionary use of large-scale, highly influential population studies and surveys which have created a vital evidence base and provided a benchmark for future research.

“These have included the ground-breaking Western Australian Aboriginal Child Health Survey – which remains the largest and most comprehensive investigation ever undertaken into the health and well-being of Aboriginal children and their families in Australia – and the ongoing Longitudinal Survey of Australian Children, of which he is one of four original architects.

“In addition to creating and conducting these and other surveys, he has ensured their results are turned into action –  patiently and determinedly translating that knowledge into real outcomes that improve life for children and families.

“Melissa’s work has advanced knowledge about child abuse, maltreatment and neglect, here and internationally, and demonstrates the value of using linked government data to advance research.

“She is widely respected for the work she does, and the knowledge gained from her research has helped shaped key strategies and legislation aimed at protecting and supporting vulnerable children, including those with disabilities.

“I am extremely proud of the way both Steve and Melissa continue to use their talents to fulfil the Institute’s core goal of making a positive difference to kids’ lives.”

The winners will be announced by the Premier in August.

Steve Zubrick is a Senior Principal Research Fellow and Head, Brain and Behaviour at the Telethon Kids Institute; and holds a professorial appointment with the Centre for Child Health Research at The University of Western Australia (UWA). He is also Chairman of the Consortium Advisory Group for the Longitudinal Study of Australian Children and a Member of the Steering Committee for the Longitudinal Study of Indigenous Children. In 2014, he was one of nine Chief Investigators who won $20 million in funding to create the Australian Research Council Centre of Excellence for Children and Families Over the Life Course (The Life Course Centre) and is its Deputy Director.

Professor Zubrick holds several national and international competitive research grants and his research interests include the study of the social determinants of health and mental health in children, studies of the genetic and environmental determinants of language development, and large scale psychosocial survey work in non-Indigenous and Indigenous populations.

Over the past 25 years he has been instrumental in designing and implementing the leading Australian studies (national and state) of child and adolescent mental health. Regarded as Australia’s foremost social survey methodologist, his work has provided a critical evidence base which has guided policies and services for children across Australia, and placed Australian child and adolescent mental health into a global perspective.

Melissa O'Donnell is an NHMRC Early Career Fellow and Acting Project Manager of the Linked Analytics and Social Policy team at the Telethon Kids Institute; and a research associate at UWA.

Dr O’Donnell, a psychologist, completed her PhD in 2009 through UWA. Her internationally recognised research uses longitudinal population data from the Western Australian Government Departments of Child Protection, Health, Corrective Services and Education which has been linked and de-identified through the Data Linkage Unit at the Department of Health. This administrative data is being used to: investigate emergency department presentations and hospital admissions related to child abuse and neglect; determine the mental health and juvenile justice outcomes of children who have contact with the child protection system; and investigate the child, family and community characteristics which increase or reduce vulnerability to child abuse and neglect.

Dr O’Donnell’s research is improving knowledge around factors that increase vulnerability to child maltreatment, resulting in changes to policy and practice and contributing to the international monitoring of child abuse and neglect. Knowledge gained from her research has shaped the Western Australian Department of Communities’ Building Safe and Strong Families: Earlier Intervention and Family Support Strategy 2016, and the Legislative Review of Western Australia’s Children and Community Services Act 2004.