As a vital research tool, data linkage connects pieces of information that are thought to relate to the same person, family or event, in a way that does not breach their privacy.

These data cover a spectrum of life experiences from birth and death, early childhood development, education and hospital admissions, to electoral, housing and justice records.

This increased reliance on data for research, here and elsewhere, is one of the factors that in May this year, prompted the Federal Government to announce a raft of data reforms, including the creation of a national data commissioner role.

It was a move welcomed by Telethon Kids Institute Patron Professor Fiona Stanley, who said Australia's data was a major national resource.

"These reforms will provide better opportunities for innovation in the medical sector, as well as improve our ability to stay at the forefront of medical research and innovation, while protecting individual privacy," Professor Stanley said at the time.

"The ability to share data across government agencies at both a Federal and State level will enable more rigorous evaluation of services and allow us to truly develop evidenced-based policies to improve health."

The Telethon Kids Institute's Linked Analytics and Social Policy Team has been a key participant in the pioneering process of linking de-identified longitudinal, population-based data collected by the Institute, NGOs and government agencies, to create a valuable research resource which in turn informs government decision-making and policy planning.

The landmark Developmental Pathways Project (DPP) was set up in 2005 to investigate the factors leading to differences in developmental outcomes, and the pathways to problems such as juvenile offending, child abuse, poor physical and mental health outcomes, and student absenteeism.

Linked Analytics and Social Policy Team head Dr Rebecca Glauert said the DPP was instrumental in the linkage of a large amount of non-health government agency data to health data in WA.

"Through the DPP's collaboration with the Data Linkage Branch at the WA Health Department, and 11 other State government agencies, researchers now have access to linked data from WA Police, Education, Justice, Housing, Child Protection, and Disabilities," Dr Glauert said.

"Data linkage allows researchers to access unbiased data on entire populations. The breadth of data that are available through the linkage of administrative datasets far exceeds the data that could be collected via surveys or other means.

"Population researchers can use the linked data to investigate rare outcomes, as well as common outcomes, for entire populations.

In addition, they are able to identify the characteristics of individuals who are at risk of certain outcomes – which in turn helps clinicians and government target those people appropriately."

In the 13 years since it began, the DPP has facilitated numerous projects which have shed light on subjects as diverse as attention deficit hyperactivity disorder, traumatic brain injuries, preterm births, alcohol-related harm, and the effects of diet on educational outcomes.

A recent study into the pathways of young people in contact with multiple government agencies aimed to identify the characteristics and patterns of service use by a cohort of young people born between 1994-1997 who had used four government services – child protection, mental health, courts and corrections.

The study found young people in contact with multiple government agencies comprised a relatively small group of clients, but they had a disproportionately high level of service use. About 0.5 per cent had dealings with all four agencies, accounting for 16 per cent of all service contacts. Of those, nearly half were Aboriginal and 64 per cent were male.

The findings highlighted the need for extra resourcing for the early identification and targeting of services at at-risk youth who were likely to become caught up in a ‘revolving door' of service use.

Another of the DPP's innovative ideas is the Western Australian Child Development Atlas, which will map a number of important child development and wellbeing indicators across geographical areas of WA, as well as the locations of various services and programs.

This will help to provide a picture of the overall health and wellbeing of particular communities and assist government with its resource allocation. "The project is currently in the ‘proof of concept' phase, involving the development of a pilot Atlas," Dr Glauert said.

"This will be demonstrated to stakeholders and end users and feedback sought on the functionality and utility of the Atlas, with feedback informing the development of the full version of the Atlas in the next phase."

The team is currently working on several projects and initiatives to try to increase researchers' access to data. They are also seeking a new grant to expand the DPP to investigate adult outcomes across the life course.

Data on parental convictions and early childhood development have been used in a Telethon Kids Institute study that could promote a better understanding of how to respond to the needs of children with convicted parents. These children are currently not adequately supported by child-or adult-oriented services.

The study used linked de-identified administrative data from WA's Department of Justice to determine that 7 per cent of the 19,000 children born between 2003 and 2004 had parents who had served community-based orders or prison terms.

These records were merged with children’s scores on the Australian Early Development Census, which measured their physical, social, emotional, communicative and cognitive development.

Lead researcher Megan Bell said the study found that children of convicted parents had a high risk of being developmentally vulnerable across all measured domains, with children of imprisoned parents experiencing even greater risk.

Dr Bell recommended the introduction of standard procedures in Australia to identify children of convicted parents and support their development.

A recent Telethon Kids Institute study investigating the risk of child maltreatment across various disabilities relied on records covering more than half a million WA children.

Children with disabilities are three times as likely to experience abuse and neglect, and the study highlighted how different risk levels related to disability types. 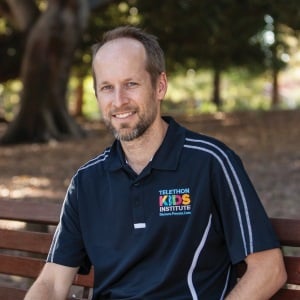 The researchers examined linked de-identified records from a number of sources, including Birth Registrations, Western Australian Register of Developmental Anomalies and the Department of Child Protection and Family Support, for 524,534 children born in Western Australia between 1990-2010.

Data analyst Scott Sims, from the Developmental Pathways Project, said children with an intellectual disability, mental health problems or conduct disorders were at highest risk compared to those with autism, Down syndrome, cerebral palsy or birth defects.

The findings indicated that not only was more support needed for families caring for a child with a disability, but those services could be better targeted for the high-risk groups.