Emma White, a registered nurse, suspected for several months that something was wrong with her 7-year-old daughter Aroha, but couldn't get answers despite visiting numerous GPs.

"Aroha had been very ill with asthma and the common cold," Ms White said.

"She started to get fractures, and in the lead-up to me taking her to the hospital we saw numerous GPs as well as the local ED."

By the time Aroha was admitted to hospital, she was yellow and her mother knew her liver wasn't working.

"When she was admitted into Princess Margaret Hospital in October 2016, I was told she was in a critical condition – her platelets and haemoglobin levels were at nothing."

Aroha was diagnosed with acute lymphoblastic leukaemia, and is now a year-and-a-half into a two-and-a-half year chemotherapy regime. The treatment has come at a cost, with Aroha suffering other complications.

"She has diabetes due to the treatment and both her vision and hearing has been impacted," Ms White said. 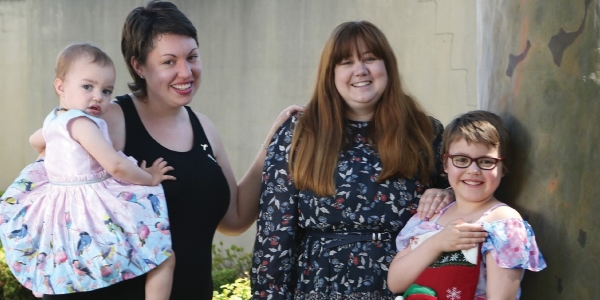 Bree (centre) with Aroha and her family

These are side effects Dr Bree Foley believes could be reduced by the kinds of cellular therapy treatments she is currently working to develop. Such treatments could eventually reduce toxic chemo treatments, she said, in turn leading to fewer adverse impacts on kids like Aroha.

"Training the immune system to treat cancer is revolutionising treatments for kids with cancer."

"In our lab we hope to continue to find better and more effective ways to fight cancer and limit the collateral damage current treatments cause, " Dr Foley said.

After spending Christmas 2016 as an inpatient in the cancer ward at PMH, last year Aroha took on the huge task of sewing 65 Christmas stockings for other sick children who needed to spend Christmas in hospital.

She said she hoped advances in immunotherapy research would help Aroha and other kids like her.