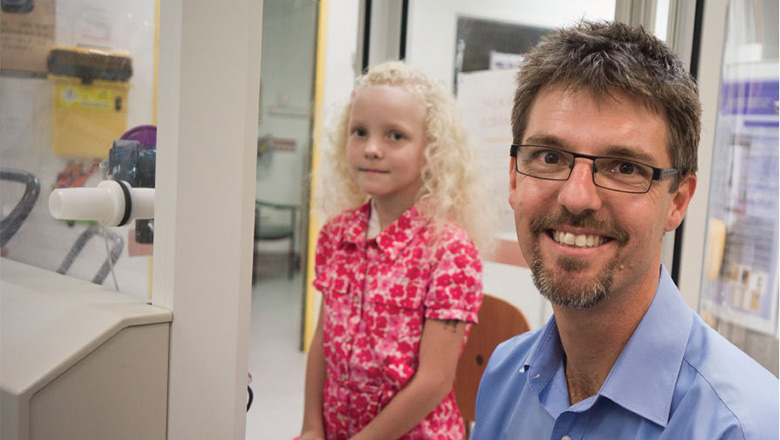 Professor Graham Hall suspects he was one of those kids who was always asking, "Why?" As an adult, not much has changed. Except these days, he's channelling that innate curiosity into improving the futures of children born with lung diseases, particularly cystic fibrosis.

"Life expectancy twenty or thirty years ago was in the twenties," says Graham. "It's now in the thirties. For babies born today, their median life expectancy is the mid-forties." Research by experts all over the world is what has made the difference - and Telethon Kids is a key contributor.

For over a decade, Institute researchers have played a leading part in the Australian Respiratory Early Surveillance Team for Cystic Fibrosis (AREST CF). They collaborate with research groups across Australia, as well as in New Zealand, the Netherlands, United States, and Canada. Findings have been significant.

"What we've been able to show is that if there's lung damage early, lung function is likely to be lowered early. If you want to make changes, you really have to intervene in the first two years of life. Even waiting till children are 5 or 6 is too late," says Graham. Early interventions in little lungs will lead to longer life expectancies and a much improved quality of life.

An AREST CF clinical trial is currently underway in eleven centres across Australia and New Zealand, investigating whether giving broad spectrum antibiotics reduces the impact of early childhood infections in kids with CF. "Really what we want is a cure," says Graham Hall. "We want to reverse a genetic defect but until we can do that, what we have to do is minimise harm."

The blind trial, is funded by a public foundation. Graham Hall says with the right support, there's no reason Perth's isolation should prevent our researchers from making important, game changing advances.

"What philanthropy does is allow us to reach for the stars. We can take those high risk, high return approaches that enable us to not just make incremental steps but to start making those big strides."