Trans Pathways was launched in September 2017 and received wide media coverage, with an estimated to reach 8.4 million people. Since then, it has had an enormous impact.

Trans Pathways has been cited in the United Nations Human Rights Council (2018) Report of the Independent Expert on protection against violence and discrimination based on sexual orientation and gender identity, the Australian Standards of Care and Treatment Guidelines for Trans and Gender Diverse Children and Adolescents (2017), and Western Australian Commissioner for Children and Young People’s Issue Paper: ‘Lesbian, Gay, Bisexual, Trans and Intersex (LGBTI) children and young people’ (2017).

The findings have been presented to numerous state and federal politicians across Australia. Over the past year, Penelope Strauss has been invited to give many presentations to service providers, and at academic conferences and has given a national webinar.

What is Trans Pathways?

Trans Pathways is the largest study ever conducted of the mental health and care pathways of trans and gender diverse young people in Australia (859 participants). It is also the first Australian study to incorporate the views of parents and guardians of trans young people (194 participants).

What did Trans Pathways tell us?

Trans young people found it difficult to access health services with 60% feeling isolated from medical and mental health services, and 42% having reached out to a service provider who did not understand or respect their gender identity. Problems with health services included a lack of education about gender diversity, not knowing where to refer trans clients, and transphobia.

Many trans young people have experienced negative situations that affect their mental health such as peer rejection, bullying, issues with school, university or TAFE, and a lack of family support.

Participants told us they used music and art, peers and friends, activism, social media and pets to make themselves feel better and take care of the mental wellbeing.

We have provided a list of recommendations for governments and health providers, as well as guidance for schools, parents, peers and young trans people. 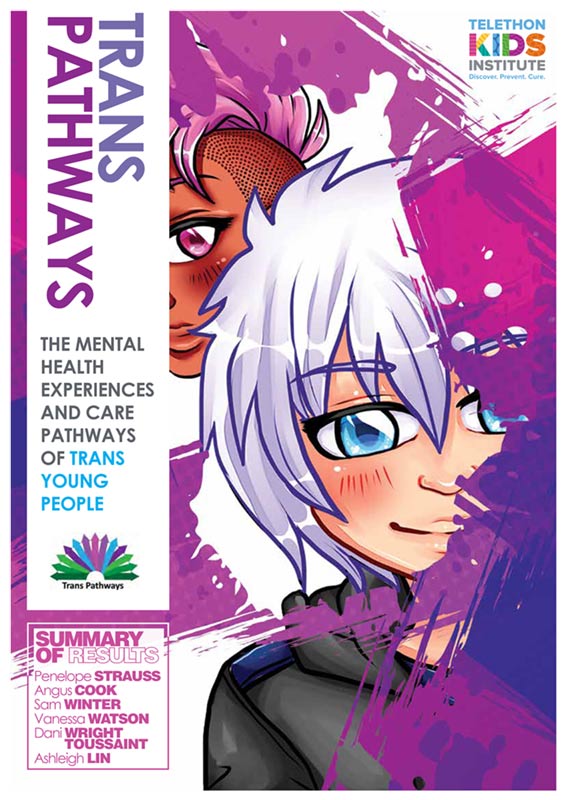 Why discussing transgender is difficult but necessary

Trans young people at high risk of depression and suicide

Some of the topics discussed in this report may be distressing. Please reach out for support if you are feeling distressed.

Drew is 16 years old. He came out as trans two years ago. This is his experience. Trans Pathways is the largest study ever conducted of the mental health and care pathways of trans and gender diverse young people in Australia (859 participants).