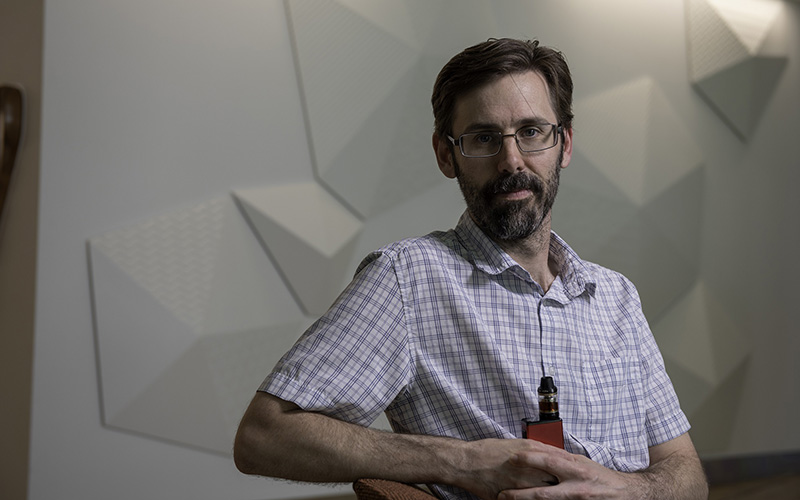 The study, which is the most comprehensive Australian study of its kind, was published in the Medical Journal of Australia today. Researchers examined the ingredients of more than 60 of Australia’s most popular over-the-counter, “nicotine-free” liquids used for electronic cigarettes (in their original and aged forms) and found the majority of e-liquids contained substances that are known to cause respiratory issues and lung damage when inhaled.

Equally concerning, nicotine was present in nine per cent of the liquids tested despite them being marketed as nicotine free. Nicotyrine, which is an oxidised version of nicotine indicating the e-liquid previously contained nicotine, was found in 10 per cent of fresh e-liquids tested and almost 14 per cent of aged.

“The amount of nasty chemicals found in these e-liquids is concerning. Many of the flavouring ingredients we found are known toxins and irritants, which when inhaled can damage our airways and lungs,” Associate Professor Larcombe said.

He said none of the e-liquids tested were labelled with a comprehensive ingredient list, so it would be impossible for users to know what chemicals they were inhaling.

Concerningly, there is very little existing research on the health impacts of several of the ingredients detected in the e-liquids.

Professor Ben Mullins said while some of these chemicals may be safe and approved food additives, there was a vast difference between a chemical that is safe to ingest and one which is safe to inhale long term.

The health effects of heating these chemicals and breathing them in are largely unknown, but it is likely that they will have negative impacts compared with breathing clean air

With vaping and e-cigarettes becoming more popular with young people, Associate Professor Alexander Larcombe agreed it was important to understand the short and long-term effects of breathing in these harmful chemicals.

The team found 42 of the 65 e-liquids studied contained benzyl alcohol which is a solvent and flavour enhancer that had been known to cause severe skin and allergic reactions.

“Another alarming ingredient we found was benzaldehyde, used for its almond-like flavour, which was found in almost all of the e-liquids we tested – and in some at dangerously high levels,” Associate Professor Larcombe said.

“Benzaldehyde can increase exposure to nicotine and the concentration of nicotine in the blood. The chemical is known to be an irritant to people’s airways, and it also reduces the body’s ability to remove inhaled pathogens,” he said.

“Finding benzaldehyde in a lot of these products is concerning. It means that a majority of vapers are breathing in a chemical that is classified by the Globally Harmonized System of Classification and Labelling of Chemicals as ‘Harmful if inhaled’. As a result of its known negative health impacts, benzaldehyde is one chemical that is also included on the Therapeutic Goods Administration’s list of prohibited e-liquid ingredients (TGO 110) – meaning that it is now banned in Australian e-liquids.”

“We know that e-cigarettes increase the chances of a non-smoker taking up cigarettes and that they are being deliberately targeted to appeal to young people.

“We now have the evidence to support consistent Tobacco licensing in all states, restrictions on non-nicotine vaping products, changes to the Tobacco Advertising Prohibition Act and much stricter monitoring and compliance – all are required to protect our young people from these toxic products,” Dr Burnell said.

The Lung Foundation Australia CEO Mark Brooke said a nationwide ban on the use of e-cigarettes was vital to protect Australians, especially young people, from the known and unknown risks of vaping.

With the unregulated, untested and unknown nature of the vape industry, we knew the research into the chemicals and toxicity of e-liquids would uncover strong findings, but we never expected such alarming results

The research team also found many of the e-liquids tested contained other chemicals used for flavouring, such as menthol which enhances the addictive properties of nicotine and alters how nicotine metabolises; as well as trans-cinnamaldehyde (cinnamon flavour), which impairs people’s immune response.

“Breathing in the cinnamon-flavouring chemical has been known to reduce the way your body responds to lung infections, which means your body’s chance to fight off infection is restricted,” Associate Professor Larcombe said. “This chemical is also banned in Australian e-liquids.”

This study built on previous results published in 2019 that examined 10 “nicotine-free” e-liquids, which found the majority did contain nicotine and some with relatively high levels. In this study, the team found nicotine in six of the 65 e-liquids tested. In addition, they found nicotyrine in seven fresh (two of which also had nicotine) and nine aged e-liquids.

The research is part of a series of projects that have been made possible by Minderoo Foundation’s Collaborate Against Cancer Initiative, Lung Foundation Australia, Cancer Council WA and Scottish Masonic Charitable Foundation WA.

Lung Foundation Australia is the only charity and leading peak body of its kind in Australia that funds life-changing research and delivers support services that give hope to people living with lung disease or lung cancer. Since 1990, we have been working to ensure lung health is a priority for all, from promoting lung health and early diagnosis, advocating for policy change and research investment, raising awareness about the symptoms and prevalence of lung disease and championing equitable access to treatment and care. To find out more visit: lungfoundation.com.au