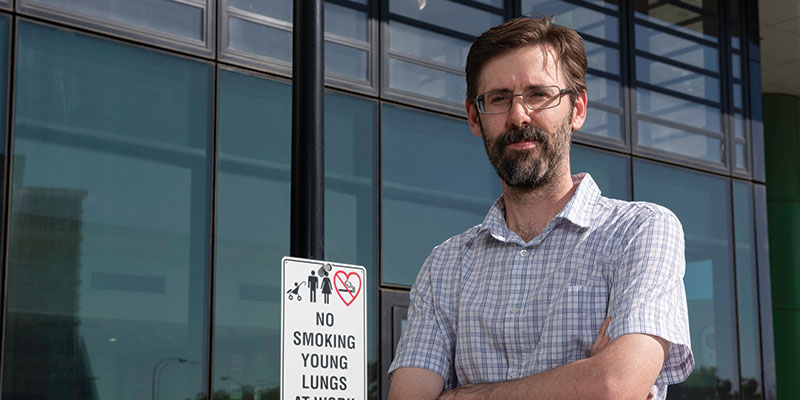 Just a day after the findings were published in a research letter to the Medical Journal of Australia in January, the Therapeutic Goods Administration (TGA) issued a media release warning consumers about the potential risks of purchasing electronic cigarette liquids.

The release quoted the research’s findings that undisclosed and potentially harmful ingredients had been found in e-cigarette liquids being sold in Australia – including nicotine and an acutely toxic chemical typically found in pesticides and disinfectants. 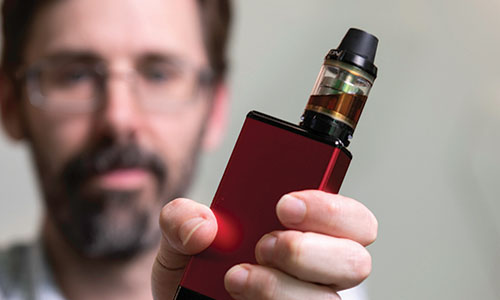 It is illegal in Australia to sell e-liquids containing nicotine, which is classed as a Schedule 7 Dangerous Poison under the Poisons Standard (with specific exemptions such as some nicotine replacement therapies and tobacco for smoking).

A team led by Associate Professor Alexander Larcombe, Head of Respiratory and Environmental Health at Telethon Kids and part of the School of Public Health at Curtin University, bought 10 e-liquids online and over the counter from Australian suppliers and had an independent commercial laboratory test them.

All 10 had been labelled ‘nicotine-free’. Six samples were found to have trace levels or low doses of nicotine in them, while all 10 were found to contain 2-chlorophenol – a chemical used in insecticides, herbicides and disinfectants and which is known to irritate human airways and skin.

The analyses also revealed by-products of animal or human bodily functions, suggesting the manufacturing process had been contaminated by mammalian blood, urine or faeces.

Dr Larcombe said the findings suggested consumers were purchasing e-liquids without really knowing what was in them, highlighting the lack of regulation around the labelling and manufacture of e-cigarette products in Australia.

“We went into this not knowing what we would find and many of the findings were a bit surprising,” Dr Larcombe said.

“What they did show is that there’s no way people can tell what’s in these products based on what the label says. We wanted to raise awareness, to get people thinking about it more so they can make more informed decisions about what they’re consuming.”

“There’s a lot of uncertainty out there – people think they know what they’re breathing in or that it’s completely benign and is just water vapour. Maybe a few of those people now realise that it’s not.”

Although based on a small sample, the research revealed similar findings to an early NSW-based study, and received national and international media coverage – highlighting the intense interest in a subject which continues to divide consumers, policymakers and health groups.

The TGA response noted that the evidence for e-cigarettes as an option to quit smoking remained mixed, and that there were concerns that significant use of nicotine-containing e-cigarettes by adolescents could be a gateway to longer-term cigarette smoking.

“At this time, no electronic cigarettes have been approved in Australia as a therapeutic good for smoking cessation. Since the TGA does not regulate these products, their quality and safety is not known,” the statement said.

In a position echoed in a viewpoint article he was recently invited to write for The Lancet Respiratory Medicine, Dr Larcombe said there was a clear need for more research to establish the true impacts of e-cigarettes – particularly on pregnant women, babies and children who may be exposed to the aerosol produced by the devices. Apart from the impacts of ‘vaping’, there had also been instances of young children dying from drinking e-liquids.

“There is this perception that e-cigarettes are safe to use during pregnancy, and it’s completely unsubstantiated and almost certainly untrue because women and their unborn babies are still getting exposed to nicotine and other potentially harmful chemicals,” said Dr Larcombe

“So, if a pregnant woman is thinking of switching to e-cigarettes instead of smoking, which the literature shows a lot of women are, the outcomes might be just as bad. We just don’t know.

“We really don’t know the answers to a lot of the questions that people are asking about e-cigarettes. What is needed now is a lot more research.”