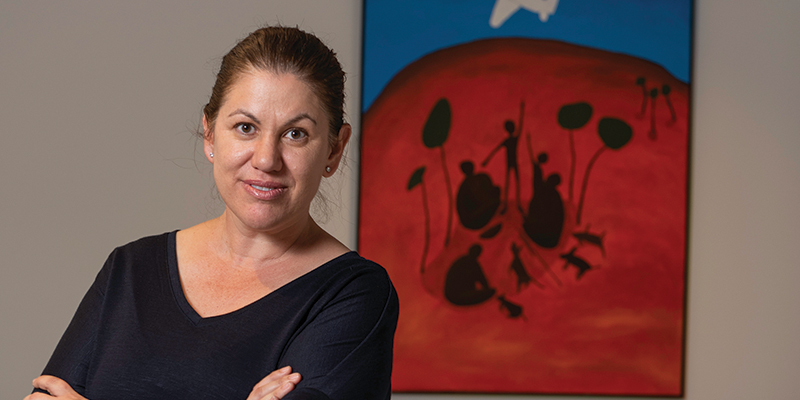 Telethon Kids Institute data linkage research confirming young people who have experienced out-of-home care face serious disadvantage has bolstered a national push to extend formal support to the age of 21, and prompted a trial of the concept in WA which could lead to permanent policy change.

Telethon Kids Institute researcher Dr Melissa O’Donnell is only too familiar with the  problems that can befall some of the most vulnerable people in our society.

Named Woodside Early Career Scientist of the Year at the 2018 Premier’s Science Awards for her internationally recognised work in the area of child abuse and neglect, she has spent more than 10 years investigating the factors behind child maltreatment and what happens to those who experience it.

Now, her research into outcomes for children taken into the child protection system is helping to challenge a long-standing policy – replicated in every state of Australia – which has traditionally seen young people turned out of care and largely left to fend for themselves the moment they turn 18.

Early last year, a data linkage study undertaken by Dr O’Donnell, Fernando Lima and Dr Miriam Maclean – from the Institute’s Developmental Pathways and Social Policy team – demonstrated that young people who have been in care fared much worse in terms of their mental health, education, health, and interaction with the juvenile justice system than those of a similar socioeconomic status in the general population.

The results lent strength to Home Stretch, a national campaign which has urged all states to change legislation to support young people in care until the age of 21 so as to help them transition properly into adulthood; and were immediately requested by the WA Office of the Auditor General as evidence assisting its inquiry into young people leaving care.

By October last year, WA Child Protection Minister Simone McGurk had announced that  the Department of Communities would support a pilot program of extended care, to be rolled out in coming months.

Dr O’Donnell, who is on Home Stretch’s WA committee, was part of the multi-agency expert group charged with developing the pilot program. She is advising the evaluation component of the pilot and, pending any modifications, hopes to see the program implemented for all young people transitioning from care within 12 months.

“This is really exciting for us,” Dr O’Donnell said. “We’ve really been pushing as part of the Home Stretch campaign that we need to increase the leaving care age to 21 years.

“The outcomes for these young people are particularly bad and we needed to look at how we can provide transition support for them to ensure they are not just cut off at 18 years of age.

“At 18, many young people are still at high school, so it causes particular challenges when told on their 18th birthday that their care has finished, and they need to find their own accommodation and be independent,” Dr O'Donnell said.

“For these young people who have had significant trauma in their lives, it is really tricky to navigate independence.”

The pilot program will support young people to stay in a current foster care arrangement that they like until aged 21, or to transition in and out of care as they feel able.

Alternatively, a transition support worker will help them find accommodation and guide their education and work options until they are 21.

“They have suffered so much trauma in their lives, we are hoping to give them a better chance for better educational, work and mental health outcomes.” Dr O’Donnell said.

“We are definitely trying to put pressure on the other states now to match what has been done in Victoria and Western Australia in terms of extending the leaving care age and to do their own pilots,” Dr O’Donnell said.

“We are hoping a lot of the work we are doing looking at the transition support being offered will provide information and evidence for other places that want to implement pilots as well.”

Our project in detail

The Telethon Kids Institute, through the Developmental Pathways and Social Policy team, was commissioned and funded by the Department for Child Protection and Family Support to investigate outcomes for children who had left out-of-home care, up until 23 years of age.

The project used linked data from government agencies, including the WA Departments of Health, Education, Corrective Services, and Communities. Service contacts and outcomes, such as educational attainment, were compared with a similar group of WA children who had contact with the Department for Child Protection and Family Support but had not been in care, and a control group of similar children who had no contact with the Department.