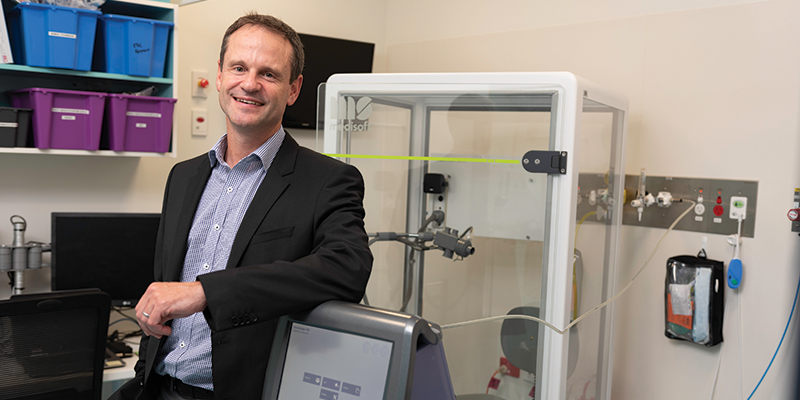 Paediatric respiratory physician and Telethon Kids researcher André Schultz has had to wait more than a decade to test out a simple idea which – if promising early results are any guide – could revolutionise the way asthma is diagnosed. The answer could lie in the study of metabolites – the unique chemical fingerprints left behind by cellular processes in the body.

When Dr Schultz first heard about the science of metabolomics 11 years ago, he was intrigued by the potential it held for unlocking the mechanisms behind asthma.

Despite being the most common long-term medical condition in Australian children, asthma remains poorly understood. It’s often preceded by a recurrent wheeze in babies and small children – but not all children with wheeze go on to develop asthma.

There are currently no clinically viable methods to accurately diagnose asthma before six years of age, leaving doctors unable to predict which children will stop wheezing naturally and which will go on to have chronic issues. As a result, many children are treated with asthma medication as a precaution, even if they may not need it; while others who would benefit from treatment miss out. 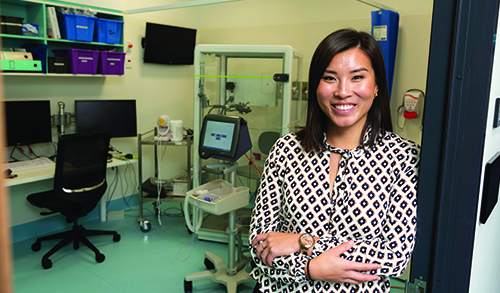 “There’s a real need to provide clarity as early as possible in a child’s life,” Dr Schultz said.

“If we could predict whether or not a recurrent wheezer really has asthma, we could avoid unnecessarily exposing children to medications which can have side effects, and ensure we capture those who really do need this treatment.”

After hearing about metabolomics in 2008, Dr Schultz wondered whether high-powered analysis of the metabolites in children’s urine might deliver that predictability, by identifying tell-tale metabolomic signatures indicative of underlying disease.

“The idea was that, through a simple, non-invasive urine test, perhaps we could understand and predict asthma much earlier in a child’s life,” Dr Schultz said.

“I’ve been wanting to test this theory since I first heard about metabolomics, but we just didn’t have the expertise in Perth at the time and I didn’t have the scientific track record to get the funding to do anything.

“Also, network biology, or the science of analysing big data – which you need to be able to process the thousands of metabolites from each patient – hasn’t been possible until fairly recently.”

Last year Dr Schultz and a team including research assistant Sherlynn Ang began recruiting pre-school and school-aged children with and without asthma to the Metabolomic Asthma Profile (MAP) study. They’ve signed up more than 200 families, who have responded so enthusiastically that the team now hope to be able to follow the children long-term.

“The thing with asthma is it often comes and goes,” Dr Schultz said. “Those with pre-school age asthma may not have school-aged asthma, and may have adolescent age asthma – or they might not.

“People go in and out of these groups as they get older but we have no way of study will give us answers and help us predict what their trajectory might be over the lifetime.”

Early results from a pilot study lin 2018 revealed what appeared to be clear differences between school-aged children who were healthy or had different patterns of asthma and wheeze.

He said part of the reason for the study’s success so far was that it wasn’t especially onerous on participants, and families understood the importance of what the team was trying to accomplish.

“When I designed this study I was dead keen on getting three samples at different time intervals, and I knew we weren’t going to get those if we went in there and made it painful or difficult for families,” Dr Schultz said. “So, because I have little kids of my own, it’s a really kind, non-invasive study. “We’re taking some wee, doing some lung function testing, and the worst thing we do is once-off skin prick testing.

“As a result, we’ve had excellent retention rates and really good follow-up, and we’re embarking on a long-term retention and engagement strategy.

“I think families, like doctors, can understand the challenge of trying to predict, diagnose and treat asthma properly in young children. They really get it. They want to see how it turns out and we are keen to tell them.”