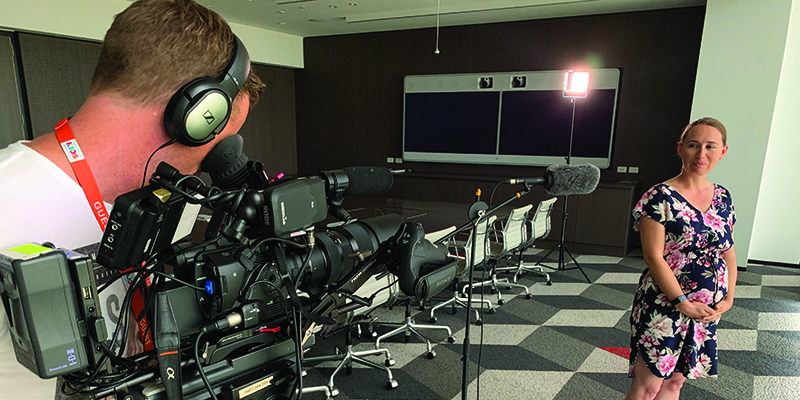 Behind the scenes of filming for new resources aimed at helping GPs use the AUDIT-C screening tool.

A screening tool to help midwives and other health professionals contribute to the prevention of Fetal Alcohol Spectrum Disorder (FASD) is changing maternity practice across WA public hospitals and expanding knowledge about the risks of drinking alcohol in pregnancy.

Alcohol risk screening and preventive education are now being embedded into routine maternity care after the validated AUDIT-C (Alcohol Use Disorders Identification Test – Consumption) and associated Learning Guide were rolled out across WA Health.

The AUDIT-C project, funded by the WA Department of Health and led by Associate Professor Tracy Reibel during her time as a senior research fellow at the Institute, comprises three questions that score a woman’s alcohol intake in pregnancy, with the total score indicating either low, medium or high risk for both herself and for her baby.

Midwives had reported in a previous study that they were concerned about their capacity to effectively ask women about their alcohol use in pregnancy, thus hampering their ability to provide advice and support. The Learning Guide was then developed to improve knowledge, understanding and effective use of the AUDIT-C screening tool.

Midwives who participated in an evaluation of the Learning Guide indicated it provided them with the skills to confidently and routinely use AUDIT-C in a non-judgemental way with all pregnant women, and offer brief interventions as required. A companion survey of pregnant women showed that routine questions about alcohol use were positively accepted, prompting them to ask more about the impact of alcohol on their baby’s development.

In July 2018, it became mandatory to record alcohol risk into the WA Health Midwives Notification Form completed for every birth in Western Australia. To help with the change, WA Health provided open access to the AUDIT-C Learning Guide to all health professionals likely to care for pregnant women, including nurses, general practitioners, obstetricians and Aboriginal health workers.

“By asking women about alcohol, health professionals can then advise why the Australian guidelines recommend they should not drink alcohol during pregnancy,” Associate Professor Reibel said.

“We know women want to be told why we are recommending that they don’t drink. By advising them based on the best evidence, referred to in the Learning Guide, we hope to reduce the rates of women drinking in pregnancy and therefore bring down the rates of FASD.”

Associate Professor Reibel said making alcohol risk screening standard for all pregnant women removed the risk that women may feel stigmatised and singled out in being asked about their alcohol use.

“If a child comes in at age seven with developmental issues, for example, doctors will be able to refer to records to establish if AUDIT-C was applied and then assess any history of alcohol use for its relevance in diagnosis,” Associate Professor Reibel said.

Heather Jones, senior manager of FASD projects at the FASD Research Australia Centre for Research Excellence (FASD CRE), said another key outcome of the AUDIT-C project was a move to add information gathered as part of alcohol risk screening to state and national data bases.

“Thanks to successful advocacy by FASD CRE co-directors, Professors Carol Bower and Elizabeth Elliott, along with others, to establish national mandatory reporting of alcohol use in pregnancy in each state and territory, data collected via the Midwives Notification Form will now contribute to the WA Health Perinatal Data Base and Australian Institute of Health and Welfare’s National Perinatal Data Collection,” Ms Jones said.

“This not only adds strength to ongoing advocacy work, but enables researchers and policymakers to monitor the success of interventions and campaigns.”

Although already available to all health professionals, the resources in the AUDIT-C Learning Guide are now being specifically updated for general practitioners. This project, funded by the Western Australian Primary Health Alliance, will produce three short videos adapting the message to prompt doctors to ask, assess and advise women using AUDIT-C.

“It’s three routine questions doctors can ask during their consultations with women to promote a healthy pregnancy, that we hope will become part of their normal interaction with all pregnant woman,” Ms Jones said.

She said such conversations could be challenging but needed to be embraced, both by midwives and medical practitioners, for the best outcomes for both mothers and their babies.

“With women who have high alcohol use it becomes quite a careful conversation – they need to be cognisant about why they might be drinking,” Ms Jones said.

“Alcohol might be being used to self-medicate for a whole range of reasons related to mental health issues or domestic violence. If they want to stop drinking but can’t, they can be referred on to appropriate services for help.”

She said women who were assessed as low or medium risk commonly raised concerns about damage from drinking and binge episodes before realising they were pregnant, sometimes even asking if they should consider abortion.

“It’s about not scaring them but advising them that the best way forward now they know they are pregnant is to try and stop drinking, and the reasons why.”

Ms Jones said broader use of AUDIT-C and its resources would also improve understanding of FASD among health professionals, including those who were trained overseas and less aware of the Australian drinking culture.

Fetal Alcohol Spectrum Disorder (FASD) is characterised by severe neurodevelopmental
impairment resulting from an unborn child’s exposure to alcohol during pregnancy.
The effects of prenatal alcohol exposure are lifelong and may not be seen at birth.
Problems include brain damage leading to delayed development, social, behavioural
and learning problems. These can lead to secondary outcomes such as poor school
performance, unemployment, substance abuse, mental health problems and early
engagement with the justice system. FASD can be found in all parts of our society and
impacts the individual, their family and the whole community.

What are the recommendations for alcohol in pregnancy?

The placenta cannot keep harmful substances such as alcohol away from a fetus. The National Health and Medical Research Council of Australia advises that women who are pregnant, planning a pregnancy, or breastfeeding should not drink alcohol.