Ask any mum or dad what they consider a key milestone in their child's development and more often than not they will say it is language development. 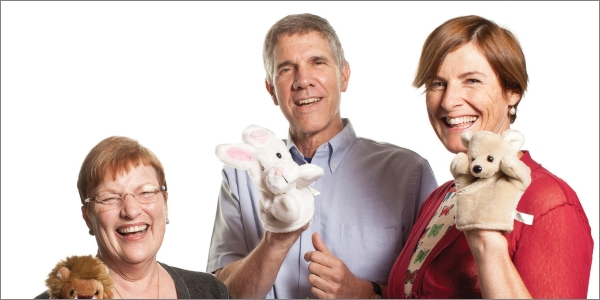 While all children progress at different rates, certain milestones offer a rough guide to what is 'normal'. By two years most toddlers can say around 50 words and are starting to join two or three words together.

However, almost one in five children will be 'late to talk' and show signs of language delay at this point. About 80 per cent of those who are late to talk will catch up by seven years of age, with the remaining 20 per cent continuing to have trouble.

This late language emergence has been a key focus of the landmark Looking at Language study, which wrapped up last year after spending 15 years working closely with thousands of Western Australian children – including 700 sets of twins.

The internationally unique study, which commenced in 2002, followed the language development of more than 2,000 Western Australian children from the ages of 2-14 years.

A joint initiative between the Telethon Kids Institute, The University of Western Australia, the University of Kansas and Nebraska University, it is the world's only study to conduct such a detailed assessment of language and literacy development from infancy through the formative adolescent years.

Professor Professor Steve Zubrick, Head, Brain & Behaviour at Telethon Kids and one of Looking at Language's four lead investigators, said the study had placed the Institute at the forefront of research and literacy worldwide and produced new knowledge about the epidemiology and natural history of language delay and language impairment.

"Our approach and our research crosses a multitude of disciplines and sits within number of the Institute's Research Focus Area," Professor Zubrick said.

He said the ability to continue following the children in the study through early adolescence had been ground-breaking.

"It is vitally important that we understand the developmental course of language and literacy from infancy and what different trajectories mean for young people's opportunities at school and beyond," Professor Zubrick said.

"Partitioning of childhood into infancy, toddlers, pre-schoolers, and school-age children, and the way policy and services focus on a particular age group, has not allowed for a more holistic view of language development and change."

Amongst the study's findings so far, Looking at Language has shown that genetic factors are important in explaining why some children do not develop language as expected. It has also demonstrated that catch-up is possible – but on the flipside, it is possible for young children to start on track and fall behind as they get older.

"A positive finding is that some children can catch up," fellow lead investigator Professor Cate Taylor said. "However, one in five children with a late start were still behind at age 7.

"We just have to do everything we can to make sure kids start off on track, otherwise the kids who are left behind have to do something quite extraordinary – they have to develop faster than the typically developing kids to catch up.

At the same time, other children who start off well can fall behind later on, and it's now understood that these patterns of change are partly due to children growing into and out of language delay risk factors and the effect of these changing over time.

"It is vitally important that we understand the developmental course of language and literacy from infancy and what different trajectories mean for young people's opportunities at school and beyond.

Professor Taylor said the study's findings showed constant monitoring of language was needed to cater for this. Parents also needed opportunities to feed into the process and say 'I'm worried about my child'.

"At every age, we want to be doing everything we can to boost children's language," she said. "But really we need to get the whole story before we can even tell part of the story."

Co-lead investigator Professor Mabel Rice, of the University of Kansas, said Looking at Language had provided a unique opportunity to investigate the extent to which Specific Language Impairment (SLI) could be attributed to genetic variation, known as heritability. Children who are late to acquire language without an obvious reason for the delay, such as hearing loss or other developmental delays, are said to have SLI.

It had also provided important findings around language acquisition in twins.

"Twins have comparatively delayed language skills at 24 months, with the gap reducing at four and six years, suggesting that twins are able to catch up. These findings alone help us better understand language acquisition, not just for twins but also singletons as well."

Professor Taylor said with data collection complete, all effort now would focus on data analysis and dissemination of results to enable the 'whole story' of language development to emerge and be seen for the first time.

"The next 15 years will focus on using the data, but first we must acknowledge the incredible efforts of the Looking at Language team that collected this information – the psychometric assessments, interviews, questionnaires and DNA samples," she said.

"We also want to thank all the WA children and families in the study who have really understood that it's important for us to have that 'long view' – from 2 to 14-years-old – to advocate for children with language difficulties."

Professor Rice said the team was aware of the importance of the task ahead, and took very seriously the fact they were custodians of the information collected from study participants.

"Our job now is to tell this story accurately and tell it in a way that the twins, other children and families of the future are going to be able to benefit from the science," she said.

The Looking at Language study