How to win friends and influence people: Cancer researchers talk the talk for big results 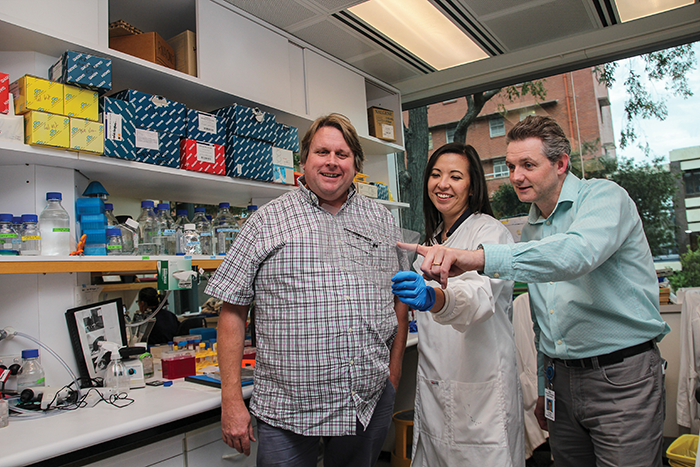 Being a researcher isn’t just about working in a lab. A significant part of the role involves talking to people: communicating with other research teams and lobbying policy-makers and funding organisations so resources can be devoted to key areas.

In the field of cancer research, lobbying efforts by the Telethon Kids Cancer Centre have contributed to major initiatives including Australia’s first personalised medicine program for children with high-risk cancer, and a mission to boost survival rates in brain cancer patients.

Co-head of Brain Tumour Research at the Telethon Kids Institute, Brainchild Fellow Dr Raelene Endersby, said that if researchers are to succeed in influencing policy decisions or funding priorities, it is essential they make decision-makers aware of the huge impact childhood cancer has on the community.

“We firmly believe that research and the application of our discoveries in clinical practice will be what creates change for our patients in the future,” Dr Endersby said. “In order to get this message through to the government, we joined forces with colleagues across Australia and with families affected by childhood cancer, and collectively engaged with decision-makers in Canberra to communicate our vision, how we planned to achieve it and what the outcomes would be.”

Dr Endersby said the Zero Childhood Cancer program had initially only been funded in NSW – a decision overturned after a spot of determined lobbying.

“By working together, we were able to convince the Government to upscale the program to a national level and ensure that every child in Australia, regardless of where they live, will be able to access the program,” she said.

The Zero Childhood Cancer program will enable scientists from 13 research institutes including Telethon Kids, along with doctors from Australia’s various children’s cancer centres, to work together to identify new treatment options for children with the most aggressive cancers – whose chance of survival on standard treatments is less than 30 per cent – or for children whose cancers fail to respond to treatment.

The program recognises that each child’s cancer is unique, so it is hoped that detailed laboratory analysis of cancer cells will help identify the drugs most likely to kill each child’s specific disease.

About 25 West Australian children will be among the 250 children enrolled in the program nationwide, and data will be shared with the clinical and research partners in Australia, the United States and Europe.

“With the right information, we should be able to personalise the treatment using each patient’s genetic information. The ultimate result will be that physicians will be able to select the most effective cancer treatments specific to each unique cancer, then define the right dose for each individual child. We believe this approach will push the survival rate upwards towards 100 per cent while at the same time reduce toxic side-effects.

“In the case of brain tumours, we might know of a good drug to target a protein within a brain cancer but we can’t actually get the medicine into the brain, so we need to find other approaches.”

“Childhood cancer is rare, and there are many different types of cancer that affect children,” she said. “We simply wouldn’t be able to make significant discoveries if we only studied the patients we see locally.

“To make those important discoveries, we have to study as many patients of each cancer type as possible. Therefore it’s a no- brainer that we are more effective working together both nationally, internationally, and across culturally diverse communities.

“Communication amongst researchers is essential. To reduce duplication and make in- roads faster, we need to be constantly aware of what our colleagues are doing.”

“Our work simply cannot rely on government funding alone, there just isn’t enough money in the budget dedicated to medical research, and even less is directed towards cancer research in children.

“Almost all large-scale research projects in childhood cancer have been initially supported to get started and off-the-ground by philanthropic funding. We then use the data we generate to convince other funding agencies to get on-board to help expand the work and realise its full potential.”

Another huge project Telethon Kids researchers are involved in is the $100 million, 10-year Australian Brain Cancer Mission – funded by the Federal Government and other organisations including Minderoo Foundation’s Eliminate Cancer Initiative.

It seeks to consolidate national research, clinical and funding efforts in a bid to double survival rates and improve quality of life of people for living with brain cancer.

Following his testimony, he was invited to be part of a roundtable that devised the roadmap for the Brain Cancer Mission, including the priorities of how the money should be spent to improve survival rates.

Professor Johns said a significant proportion of the funds would be spent on paediatric brain cancer, leading to improved survival in these young patients.

With brain cancer killing more Australian children than any other disease, he said a key objective was to ensure every patient had the opportunity to participate in clinical trials.