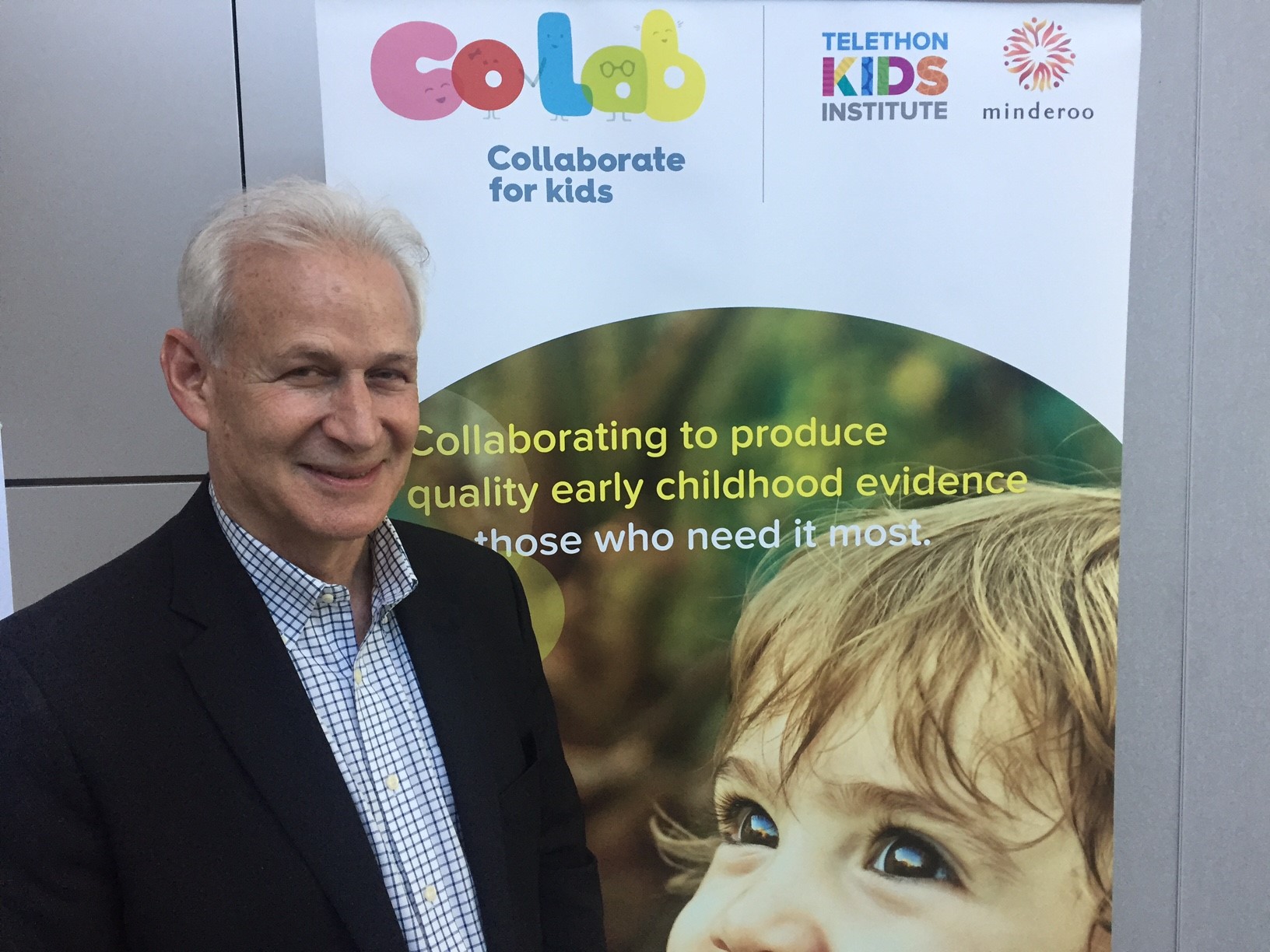 One of the world's leading child development experts will meet with early childhood professionals, Western Australian Government ministers, shadow ministers and key health, education, child protection and policing officials over the next two days for ground-breaking discussions on safeguarding the future of WA's children.

Dr Jack Shonkoff, from Harvard University's Center on the Developing Child, is visiting Perth this week as a guest of CoLab, Goodstart Early Learning and Child Australia.

CoLab was recently established as a partnership between Telethon Kids Institute and Minderoo Foundation. Its mission is to bring together families, clinicians, educators, policy makers and other professionals.

CoLab and Goodstart Early Learning have supported Child Australia to bring Dr Shonkoff to Australia as a keynote speaker for the 2017 Early Childhood Learning and Development Conference. While in Perth he will present to more than 800 early childhood policy makers and practitioners, and meet with state government ministers, shadow ministers and heads of government agencies who work with families.

“CoLab was established with the clear vision that young children in Australia develop, learn and thrive so they can build a better future for themselves and their communities,” Professor Cross said.

“We want to work with government in a different way because improving the futures of our children requires non-traditional partners working together over a sustained period of time.”

Almost one in five Western Australian children live below the poverty line, with single parent families experiencing a poverty rate of more than 40 per cent. Across the entire Australian community, the numbers of children reported as experiencing trauma and domestic and family violence has increased.

Significant or prolonged activation of the stress response systems (referred to as toxic stress) can have lifelong damaging effects on learning, behaviour and health. Stress becomes toxic when it is prolonged and when parents do not interact with their child in ways that make the child feel safe and secure.

“Dr Shonkoff’s work has shown that children suffering toxic stress are facing an increased risk of developing adult health problems like diabetes and heart disease, and that we can only help children facing adversity if we help parents and caregivers, too,” Professor Cross said. “We know that the relationship between the parent and the child is a key protective factor against toxic stress.

“CoLab and Telethon Kids as a whole stands ready to partner with government to improve the health and wellbeing of children and families in WA, particularly those that are most vulnerable.

“As Dr Shonkoff says: ‘A promising future belongs to those nations that invest wisely in their youngest citizens.’”

Dr Shonkoff established the Center on the Developing Child at Harvard University in 2006. Its founding mission was to generate, translate, and apply scientific knowledge that would close the gap between what we know and what we do to improve the lives of children facing adversity.

About CoLab:
CoLab is a new partnership between Telethon Kids and Minderoo trying to change the ways Government and communities address deep disadvantage and neglect. It will bring together families, clinicians, educators, policy makers, other practitioners and researchers to provide evidence to improve service delivery and community capacity to meet the needs of children, families and communities who are experiencing vulnerability.

CoLab was launched through a partnership between the Telethon Kids Institute and the Minderoo Foundation, made possible by Minderoo’s founding commitment of AU $1 million annually. Professor Donna Cross was appointed as Director of CoLab in June 2016. CoLab consulted extensively with stakeholders in 2016 and undertook research to develop a strategic plan to guide its work for the next five years. Our Strategic Framework was launched in February 2017 and sets out why we need to act, our plan to build a better future for young children and families and our priority areas.

CoLab will focus on:

The three key priorities of CoLab are: