In 2010, a large number of children experienced febrile convulsions after receiving the FluVax influenza vaccination and many parents began to question its safety.

While the FluVax vaccine was quickly recalled for use in children, these concerns played a major role in the significant drop in children receiving their annual influenza vaccine.

Throughout 2008-2009, almost half of Perth’s children received the FluVax vaccine as recommended by the Department of Health, yet by 2010-2014, vaccination numbers had dropped to less than 10 per cent.

To restore confidence throughout the community, a national initiative called AusVaxSafety was developed by researchers, clinicians and public health officials to monitor vaccine safety in Australia.

According to Dr Chris Blyth, Honorary Research Fellow at the Telethon Kids Institute, the research program was initially guided by surveys conducted in WA general practice and immunisation clinics in 2010.

These surveys asked parents whether their child developed any side effects in the three days following their influenza vaccination. 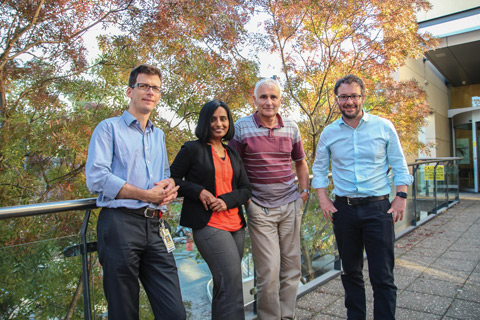 “AusVaxSafety checks with parents to see if there have been any adverse reactions to the vaccine. This approach ensures that side effects can be readily identified and safety signals rapidly flagged.

“The data is analysed weekly by Telethon Kids Institute researchers and fed back both to public health officials and the community.”

Between 4 April 2016 and 4 September 2016, the families of 3,745 Australian children receiving the flu vaccine completed the surveys. The results showed that 9.3 per cent of participants experienced side effects from the vaccine, but the vast majority were mild and lasted 1-2 days, such as a sore arm or fever.

Only 1.1 per cent attended their GP or Emergency Department, and this data was used to show that the influenza vaccine was safe for use in young children. Surveys are being sent to children and adults in 2017 in all states and territories.

“AusVaxSafety has demonstrated to parents that we are committed to ensuring the safety of the vaccines recommended for children in Australia. The surveillance system has now broadened to include the Pertussis (whooping cough) and Zoster vaccines, and gives parents the confidence to protect their family from life-threatening illnesses,” Dr Blyth said.

Following initial programs with childhood vaccines and shingles vaccine in the elderly, AusVaxSafety is now moving to monitor all vaccines in all ages. With 110 sentinel surveillance sites in all states and territories and funding from the Commonwealth Government, AusVaxSafety is uniquely placed to become the whole-of-life vaccine safety surveillance program in Australia.