In Australia, community playgroups are seen as the ‘soft touch’, with a focus on more structured learning popular. But a research project in Tonga is finding the benefits can last a lifetime.

Associate Professor Sally Brinkman is encountering a major problem with her community playgroup study in the Pacific island nation of Tonga – they have proved too popular. Although half of the nation’s communities have new playgroups set up for the study, many of the parents of children currently not allocated places are travelling to nearby communities to allow their children to take part.

“In research terms we call that contamination, but in the real world it’s great that everybody likes them and they’re taking advantage of them,” Associate Professor Brinkman said.

Although the government of Tonga has recently enshrined in legislation their intention to deliver preschool to all children living on the nation’s 54 islands, the cost of doing so has been prohibitive. 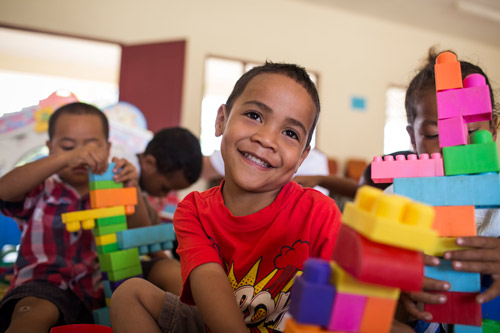 That is where the Global Practice for Education’s funding to undertake projects across the Pacific – the Pacific Early Age Readiness and Learning Program (PEARL), managed by the World Bank – has filled the gap.

In conjunction with local community members in Tonga, Associate Professor Brinkman has now created a new measure of child development: the Early Human Capability Index. The index is not only reliable but also culturally appropriate and locally owned. Now Tonga is the second country in the world to benefit from knowing more about the needs of all their nation’s children, with all children aged three to five included in the census.

“Being able to support lower-to-middle income countries in a culturally appropriate way has been very satisfying,” Associate Professor Brinkman said.

In an Early Childhood Development in Tonga report, former Tonga Education and Training Minister Ana Maui Taufe’ulungaki said Tonga had been concerned it was not making satisfactory progress in its educational performance, and that it lacked reliable data on which to assess its performance.

Following the census in 2014 Associate Professor Brinkman, along with the World Bank and the South Australian Playgroups Association, has been leading the delivery of community playgroups throughout the nation; and later this year will conduct a second national survey to determine the impact.

“My research theory, that we are starting to try and test, is even though community playgroups are seen as the ‘soft touch’, they’re the only early learning environment where you have the parents involved as well,” Associate Professor Brinkman said.

“By providing these activities and doing them with parents participating, it means you are teaching the parents as well as enhancing child development. You are increasing ‘dose’, to use medical terminology.

“You might go to two sessions a week, but because you have been taught how to make playdough, or do learning activities, it means you can do them at home. You are increasing a whole lot of parenting skills and confidence, and therefore child development. Whereas you don’t get that if you are sending your child to day care or similar.”

The implementation of community playgroups has relied on a collaborative effort between the World Bank and numerous organisations, including the nation’s government, churches, parents and community volunteers, Playgroups South Australia, and the Telethon Kids Institute.

Associate Professor Brinkman said community leaders had taken ownership of the playgroups, which began rolling out in 2014. Churches were raising funds to help support them, and volunteers from local communities were enhancing the delivery of them – for example building new huts to house them.

Community playgroups were the answer for Tonga, which needed early learning services that were universally available across 54 islands; were relatively cheap; and could benefit from the strong community spirit that exists across Tonga.

Local community members were trained to be able to deliver the playgroups.

“School readiness is the foundation for educational success, and this program is helping raise awareness of the importance of child development,” Associate Professor Brinkman said.

“The data we collect will allow policymakers to better provide the help that children and families need.”

A second census of early development will be undertaken in August this year, with the results to be ready by the end of 2017.