Australians are taught to be cautious about sun exposure because of the risk of skin cancer. But recent publicity about vitamin D deficiencies has left us confused about whether we should stay out of the sun or seek out its rays.

The Telethon Kids Institute’s D-Light program, set up in 2014 as a collaboration between multidisciplinary researchers, aims to shed light on the amount of sun exposure that will promote good health in children and adolescents.

Professor Prue Hart, head of the Inflammation Laboratory, is looking into the effects of ultraviolet radiation and vitamin D on the immune system.

“We know sun exposure can give you skin cancers but there are very significant internal health benefits of sun exposure, including improvements in our mental, bone, metabolic, respiratory and general health,” Professor Hart said. 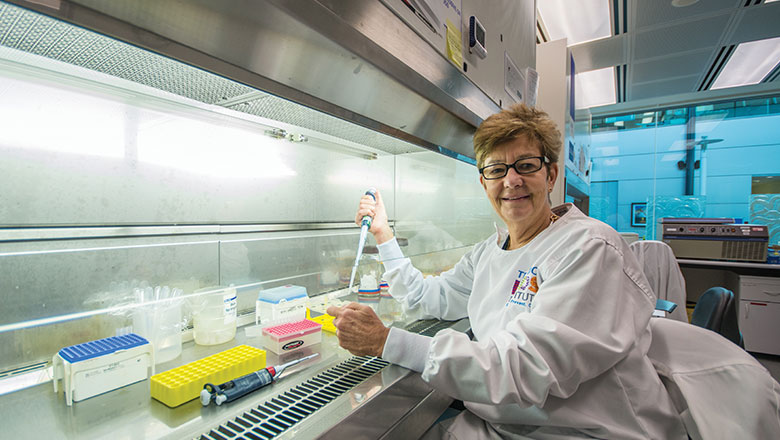 D-Light members are investigating the effects of UV radiation exposure (as in sunlight) and vitamin D on allergic reactions and asthma, obesity and the eye disorder myopia. There is also an ongoing trial giving narrow-band UVB phototherapy to people with an early form of multiple sclerosis.

“Our work also shows that one of the most important roles of vitamin D may be in development, stimulating optimal development of lungs, brain and bone, and perhaps other organs,” Professor Hart said.

“It has been proposed that most childhood conditions can benefit from sunlight exposure and/or vitamin D, including both type 1 and 2 diabetes, cardiovascular disease, allergies, asthma, autism and other brain developmental disorders, respiratory infections and bone development.”

Professor Hart said recent studies suggested that pill popping with vitamin D was not the answer for regulating your immune health.

“Supplementation trials with vitamin D have not shown the hoped-for benefits,” she said. “Instead, we realise that your vitamin D level is really a marker of recent exposure to sunlight but that it is all the other molecules formed in skin upon sun exposure that may be the active mediators of the benefits to our health.”

Professor Hart and her colleague, Professor Robyn Lucas, also worked with the Cancer Council WA to update its guidelines on safe sun exposure in winter months.

But she said the recommendations were still based on research completed in adults. “We need to better understand the consequences of sun exposure for children and where the safe balance of sun exposure may lie,” she said.

“It is easy to say that in winter, schools should have sport lessons in the middle of the day so that children take off their jumpers. In summer, responsible sun advice is not clear. At present, we support current Cancer Council recommendations for West Australians as they are built on the best evidence that we have. However, more research is needed and more knowledge of the biologically active molecules produced by cells in the skin of children and adolescents.”

Institute researchers are also developing a mobile phone app that will take a photo of your skin and give appropriate sun advice for your skin type.

“It is so important for Australians to understand the checks and balances of exposure to their greatest environmental influence,” Professor Hart said. “We propose that a personalised determination of the optimum level of sun exposure for you will allow you to avoid skin cancer development but maintain optimal homeostasis of your immune system, and allow optimal metabolic, lung and brain health.”

How much sun should we get?

According to Cancer Council guidelines, most West Australians get enough vitamin D through incidental sun exposure. But during June and July, people living in the southern part of the State - Perth or below - should go outside without protection for 30 minutes a day around midday.