Improving the lives of kids with Type 1 Diabetes 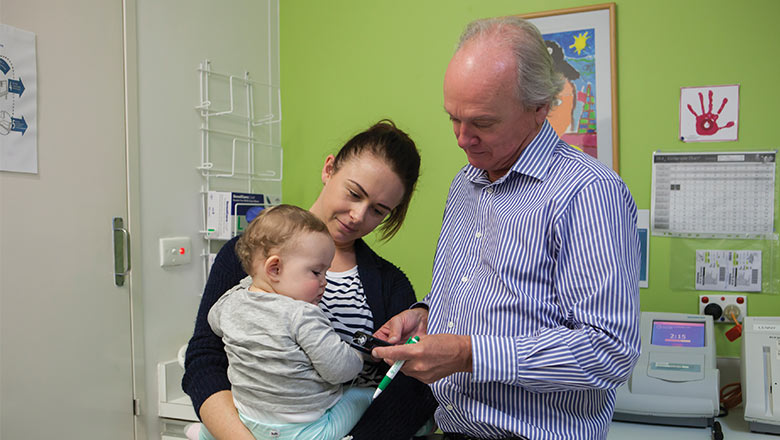 The centre, based at the Telethon Kids Institute, is the only paediatric unit of its kind in Australia and aims to improve the lives of children with Type 1 diabetes.

“It was the impetus for us to grow the research program outside of what we traditionally have been doing into areas that are becoming increasingly important, such as working with consumers, educationalists, psychosocial teams and health economists,” Associate Professor Davis said. “It has really broadened the perspective that we bring to each study and trial that we do.”

It has also led to more collaborations - locally, nationally and internationally.

“The centre is a world leader in terms of the breadth of our work and the impact of our work,” Professor Jones said. “Its focus is translation. Research may find better ways to treat patients but this is of no use unless what is found is put into practice in the clinic. The centre involves a range of people and collaborators that are needed to translate new knowledge into practice.”

The centre is currently involved in the well-publicised international effort to develop revolutionary closed-loop technology. It first tested the system for overnight blood glucose control and is now leading an Australia-wide trial of these portable devices at home.

Also known as an artificial pancreas, the system comprises a continuous glucose monitoring sensor that sits under the skin and an insulin pump with a special algorithm to calculate the amount of insulin needed to keep blood glucose levels within normal range.

By automatically monitoring these levels and adjusting insulin doses, it alleviates the need for people with Type 1 diabetes to continually prick their fingers to test. It also stops insulin delivery during a hypoglycemic attack, when levels fall dangerously low.

This gives peace of mind not only to the diabetic but other family members as well, especially since these low episodes often occur at night when the person is asleep.

Professor Jones said the cost of parents waking at night worrying about their child needed to be taken into account when assessing the economic benefits of such a system.

He expected a closed-loop device would be available commercially within 12 months.

“Short-term studies have found they do control glucose levels better but we don’t yet know what happens over a long time period such as six months, when it’s used at home in the community,” Professor Jones said. “Will it really improve control, will people find them easier, what does it do to the burden of living with diabetes?”

Early work suggests it will be well accepted as a therapy. 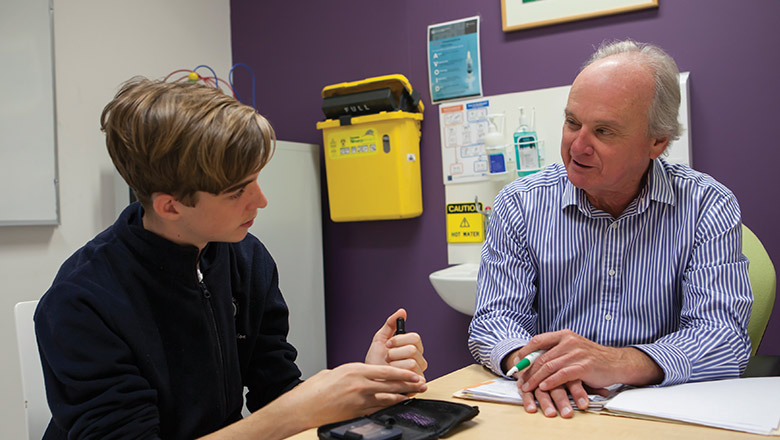 Associate Professor Davis said being involved in these trials meant Australians had the opportunity to familiarise themselves with the new technology before it came on to the market. “It actually changes the whole approach of the diabetes community to the use of a technology, once you have the experience, confidence and understanding of them,” she said.

Other studies at the WA Children’s Diabetes Research and Education Centre for Research Excellence revolve around exercise and food intake – two critical areas in the management of diabetes.

“We are seeking ways to help patients on a day-to-day basis reduce the impact of blood glucose variability in relation to exercise and food,” Associate Professor Davis said.

“We are involving the families in helping us know which areas are most challenging, so we can then design studies which will result in guidelines or information that will be made available to health-care professionals and consumers.

“We are not only completing the gaps in the science but also how we translate or feed that information back so it does go back into the community where it is needed.”

One trial is evaluating whether interspersing short sprints into physical activities such as running or cycling can be used as a therapeutic measure to avoid lows since previous studies have shown that sprints raise blood glucose levels.

Another is investigating the effects of different food content.

“We understand carbs pretty well but we’re starting to look at the impact of high protein and high fat in meals and how this impacts on blood glucose levels and how we might improve our insulin dose for those meals,” Associate Professor Davis said.

She said research into the effects of exercise and food dove-tailed nicely into the closed-loop studies. “If we understand what’s needed with insulin adjustments and the way we give insulin around each of these things that challenge you every day, that is really important information to feed into development of technology,” she said.

Seeing minute-by-minute updates of blood glucose levels through sensors was giving a better window into what was happening, in all facets of a diabetic’s life.

Other areas of interest include developing programs to support people with Type 1 diabetes at school, sending a child’s readings direct to a parent’s smartphone, and the testing of an app to track emotional state to see how it relates to blood glucose levels.

“We want to see how emotional stress impacts on blood glucose levels,” Associate Professor Davis said. “We are being told that it does in clinics but there is not a lot of data.”

The centre relies heavily on community participation and is never short of volunteers to take part in research.

“Families are always keen to step up and do studies because it is all really important to them,” Associate Professor Davis said. “It reflects the impact that diabetes does have on families.”