Two Telethon Kids researchers are the driving force behind an innovative, global action group on child brain cancer, which has been described by their peers as the “pinnacle of collaboration and cooperation.”

Paediatric Oncologist Dr Nick Gottardo and researcher Dr Raelene Endersby, who first met during their post-doctoral training in the United States, brought internationally renowned scientists and clinicians together, in a bid to save the lives of children with medulloblastoma brain tumours. 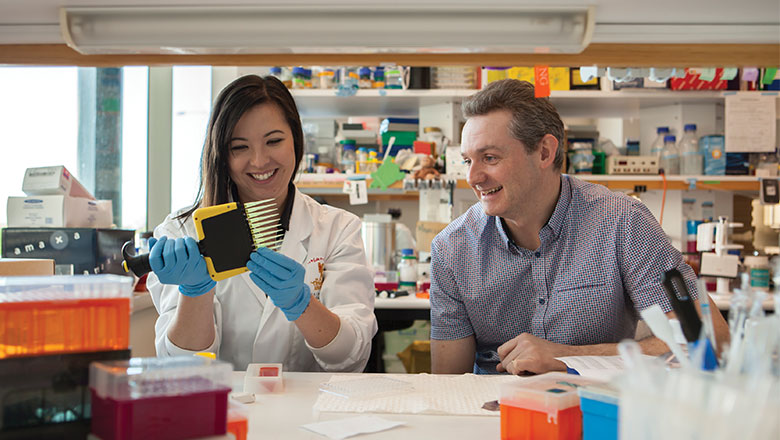 Working with a unity and passion that is unprecedented in the field, the International Medulloblastoma Working Group now shares resources needed for medical research into the rare tumour, which mainly affects children aged between five and eight.

“We are all focused on the most urgent things which are needed to help find new treatments for kids with this type of brain tumour – genetics, experimental models, drug screening and better diagnosis,” said Dr Endersby.

“Working together prevents duplication of our research across the world and should lead to quicker results.”

The group of more than 50 clinicians and scientists first united in Perth and now maintain regular contact. They are based in the United States, Canada, England, France, Germany, Italy, New Zealand and every major cancer research centre in Australia.

“All of us just want what’s best for the patient,” Dr Gottardo said. “We share data, technology and other resources. There’s a lot of generosity and goodwill.”

It was apparent that medical progress in improving the survival of children using conventional therapies had stalled. Patients needed large doses of radiation and survivors had a reduced quality of life due to treatment-related side effects.

Elliot’s parents Rick and Emily were passionate about supporting brain tumour research and started major fundraising campaigns to help Elliot and other children with brain tumours.

Thanks to the family’s efforts, high-tech equipment was purchased and Dr Endersby was brought to the Telethon Kids Institute from St Jude Children’s Research Hospital in the United States, where she set up the research team in Perth with her old colleague, Dr Gottardo.

When the then Director, Professor Fiona Stanley suggested bringing all the finest minds in the world into one room to look at the best way to tackle medulloblastoma, the Parish family raised money to hold the inaugural global meeting at Bunker Bay, south of Perth.

Dr Gottardo and Dr Endersby brought the international experts together.

“The Bunker Bay meeting wasn’t like other scientific conferences,” Dr Endersby said. ”I’ve never been to a meeting like that before and very few fields in medical research would have had one like it.

“We set the agenda to look for the strategic ways to move towards finding better treatments for medulloblastoma. We talked about where we wanted to be and how to get there. Rick and Emily Parish were there for the whole two-day meeting which helped all the scientists and clinicians to maintain a focus on finding better outcomes for the patient.”

Dr Endersby said that the field of paediatric brain tumour research was very collaborative because the cancers were rare and the children became very sick.

“No single centre can run a trial without collaborating with other centres because it would take decades,” she explained. “We only have about five medulloblastoma patients in WA each year and you need large numbers to conduct a trial into a new drug, so you find hospitals and people are willing to work together.”

Treatment of medulloblastoma has also been difficult because research over many years has revealed the cancer is not a single disease entity, but instead consists of at least four distinct molecular subgroups: WNT/Wingless, Sonic Hedgehog/SHH, Group 3, and Group 4. All respond differently to the existing treatments.

A German group who are renowned as the world leaders in the genetic fingerprinting of all types of paediatric cancers, help diagnose samples of brain tumours sent over by Telethon Kids free of charge.

A group in the United States taught the Perth team better processes when running their high-throughput screening, which the researchers use to quickly conduct a large number of drug tests.

“If drug screening is not done properly you end up chasing false leads,” Dr Gottardo explained. “Our US collaborators taught us how to do very tight quality control and then after they helped us to set up we started to do some of our own experiments and found some very promising drugs which we hope can help cure more children.”

Dr Gottardo said that currently, 20 to 30 per cent of children with some of the more aggressive sub-groups of the disease could not be cured despite aggressive treatment. This was unfortunately the case with Elliot Parish, who passed away in 2011, aged four.

“That’s why we need new drugs and we want to test them in the clinic and make a difference,” Dr Gottardo said. “This research will really affect people’s lives.” The Perth team is now negotiating to start a clinical trial of a new class of drugs, which were developed for adult cancer and have never been tested in children.

“The hope is that we’ll find some more treatments which will maximise the effects of the chemotherapy so we can reduce the radiation which has more damaging side-effects on the patient in the long term,” Dr Gottardo said.