Fuelled by a determination to fight back against a rare incurable genetic disorder that emerged in seemingly healthy baby girls and began robbing them of their developmental milestones, Telethon Kids Institute researchers set out on a worldwide search to find out all they could about Rett syndrome.

Looking well beyond the 30 families affected in WA, they established an Australian population-based longitudinal study group (AussieRett) and a world-first international database of thousands (InterRett) that have highlighted crucial similarities and differences.

Insights were revealed through extensive parent questionnaires on the challenges of daily living as regression occurs, when ability to talk and walk may be lost. Also through DNA sampling, video footage and health and wellbeing updates.

Collected with the aim of improving quality of life, these have already contributed significantly to the on-going quest to find a cure and prevent the severe disability.

Parent and carer feedback has continued to steer the research of Dr Helen Leonard and Dr Jenny Downs and the Institute team to uncover unmet needs, reasons for misdiagnosis and links between genetic findings and clinical characteristics. 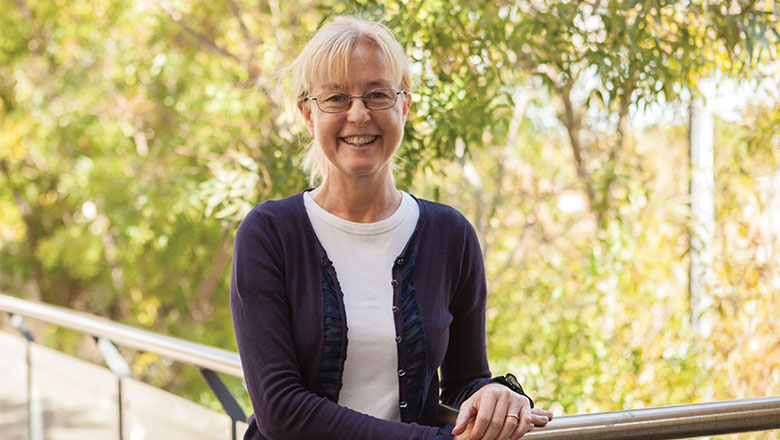 Also, it has led to them formulating comprehensive guidelines for the clinical assessment and management of complications such as scoliosis, gastrointestinal issues and poor growth, nutrition and bone health.

Focused on better treatment, care and comfort, these well-circulated guidelines are already showing the potential to contribute to improving life expectancy. Institute-collected data has revealed that girls with severe scoliosis who have a spinal fusion are usually healthier and have a longer life expectancy than those who do not have a fusion. Scoliosis has a squashing down effect on the lungs that compromises respiratory function.

Other important findings have come from research collaboration between the Telethon Kids Institute and Israel, which led to the identification of a genetic variation that influences the severity of Rett syndrome symptoms. The discovery was made of a correlation between the severity of clinical symptoms and a common brain-derived neurotrophic factor (BDNF) polymorphism.

“We have listened to what families have told us are their concerns and exactly what they wanted to know,” Dr Downs said. “And what we have produced really is world first material.”

Amongst all of this, Dr Leonard and Dr Downs have still found time to act as advocates for their Rett syndrome families, informing physicians and surgeons of their needs and producing easy-to read guides to treatment and care. Also, they personally answer, between them, an average of two to three phone calls a week from parents and carers with questions on research insights into vital day-to-day matters such as sleep and feeding.

“We have been told that we have put Rett syndrome on the map and that is fantastic,” said Dr Downs.

Only twenty years ago, Rett syndrome was a relatively unknown disorder. Around this time, Dr Leonard was inspired to switch her focus to investigating rare conditions, when witnessing the distress of a family that only had a small paragraph in a medical text to guide the care of their child.

“When I started my research in 1993, we did not even know that it was a genetic disorder,” said Dr Leonard.

“And until it was clinically defined, girls with Rett syndrome were often misdiagnosed as having a physical disability such as cerebral palsy or a developmental disorder like autism.

“When diagnostic testing became available, for a couple of years we went back and collected DNA on all the children and identified if they had a mutation or not.

“Through this, we found that children who had a milder form of Rett syndrome and milder mutations were often being missed until they were much older, 10 to 14 years, and, on occasion, until adulthood.

“And whilst Rett syndrome is associated with a gene on the X chromosome, our research has shown that boys can also develop the disorder.”

When Dr Downs joined the study 10 years ago, she knew she was in for the long haul.

“There were many very beautiful girls who were being looked after so well by their families in homes all around Australia, and there were characteristics about this situation that had an extraordinary impact on me,” she said.

“That the girls were developing fairly normally and then their lives turned upside down with the onset of regression, when skills were lost. And I could not believe that that could happen.

“It really inspired me to get very involved, to understand more about this condition and help out.”

A severe neurodevelopmental disorder mostly affecting females. Those with the condition appear to develop normally until 6 to 18 months of age when they enter a period of regression, lose speech and motor skills and develop repetitive hand movements. Common problems include seizures, irregular breathing patterns, spinal curvature, low bone density and gastrointestinal and sleeping issues. In 1999, a mutation in the MECP2 gene on the X chromosome was found to be associated with the disorder. Most mutations are sporadic (not inherited).

Telethon Kids Institute proved to be a “lifeline” for parents Rebecca and John Watson as Rett syndrome “trapped” their precious 5-year-old daughter Marlee and robbed her of the ability to walk and talk.

It is through Dr Leonard and Dr Downs, that they have learnt how to ensure she lives her life “to the fullest”. Now, the parents are armed with much-needed medical and communications strategies and life stories of others who achieved their desired goals.

“They are only a phone call away and are always available,” said Rebecca.

And in the first few months of “stumbling in the wilderness” after diagnosis, the researchers had calmed the family and strengthened their determination.

“After talking to them, I came away thinking, ‘Yes, we can do this’,” said John.