A new approach for research with Aboriginal communities

Winning the support of a remote Aboriginal community paved the way for a pioneering genetics study.

In this study of a Western Desert community, genetic variations that influence a high BMI and Type 2 diabetes were found to be similar to those in non-Aboriginal populations.

Professor Jenefer Blackwell, head of Genetics and Health at the Telethon Kids Institute, said understanding the molecular basis to obesity and Type 2 diabetes in Aboriginal communities would assist in the development of better health management strategies. 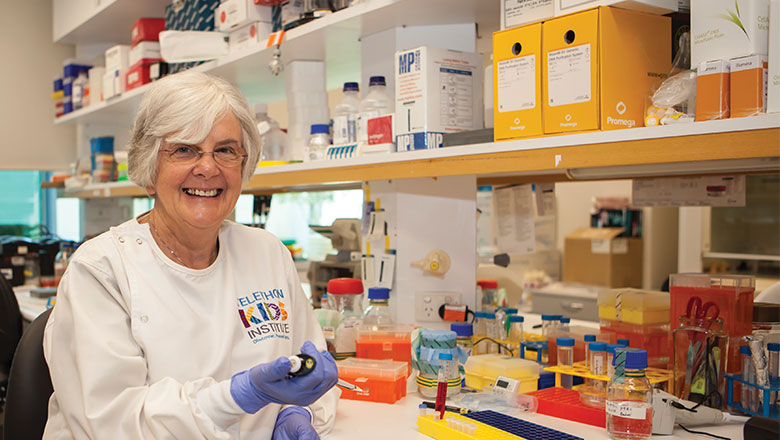 She said it had been vital to overcome community concerns about the nature of genetic research and ensure culturally appropriate methods were employed.

“Overall, there was a huge mountain to climb initially to persuade Aboriginal researchers, Aboriginal communities, and Aboriginal ethics committees of the potential benefits of healthbased genetic research,” she said.

“The first step for us was to gain the confidence and support of Aboriginal researchers at Telethon Kids Institute. The second step was to establish a rapport with a specific Aboriginal community, to learn from them what they perceived as major health issues where genetics might play a role, and to explain to them what a study of genetic risk factors might tell us about disease pathways in their population.”

Working with the local Aboriginal Health Service and a remote-area school, they extracted DNA from saliva samples collected from about 400 people with Martu ancestry, including 89 with Type 2 diabetes.

“Studies in other communities worldwide had indicated that there was a heritable component of susceptibility to obesity and Type 2 diabetes but no one had looked at this using genomewide analysis,” Professor Blackwell said.

The top association was between BMI and NTRK2, a gene which belonged to a pathway of genes that had already been shown to be genetic risks factors in other populations.

“NTRK2 and the other genes in this pathway are providing signals in our brain that control our energy balance by regulating what we eat,” Professor Blackwell said.

“The more we understand about the pathogenesis of Type 2 diabetes, and how this relates to increasing obesity in the population, the better the advice that can be given. We aren’t necessarily at the stage of a magic bullet – a pill that will just cure everyone – but our work indicates that regulating our eating patterns will certainly help in prevention of Type 2 diabetes.”

Professor Blackwell said community participation in the project was essential. “We engaged with community to provide information and feedback in culturally-appropriate formats, including an art-based educational project for feedback of scientific results,” she said.

Using storytelling and painting, local children worked with an animator to create a YouTube video called The Story of the Goanna and the Gene, which relates a story about four animals – the kangaroo, emu, goanna and eagle - and the effects of fast food and sugary drinks on the body.

Professor Blackwell said study team members also complemented the clinical care received by the community by undertaking additional specialist clinics. “All the data from these specialist visits has been recorded in Aboriginal Health Service records for local clinical use, and contributed to clinical phenotypes for genetic analysis,” she said.

“The genetic information we collected has also been applied in relation to other extreme clinical conditions in this population, including severe otitis media (ear infections) in children, and endstage renal disease in adults.

Body mass index is calculated by dividing your weight in kilograms by your height in metres squared. The result is used to determine whether you are in a healthy weight range for your height - between 18.5–25. This measure does, however, have its limitations, including not distinguishing between fat or muscle. For Aboriginals, a BMI over 22 is considered a risk factor for Type 2 diabetes.

Professor Blackwell said it was hoped that other researchers would take up the challenge to replicate the study in other Aboriginal populations.

“That would provide stronger motivation for functional studies of these biochemical pathways to determine whether they provide targets for therapeutic interventions.

"We hope that much larger studies will be possible in the future so that they will be sufficiently wellpowered statistically to obtain unequivocal results.”