Can you see signs of autism in a child's facial features? It's a question Telethon Kids Institute researchers want to answer and they've acquired new state-of-the-art face scanning technology to help them.

"Unlike some other conditions, for example Down syndrome, autism has not been classically associated with a distinct facial phenotype," says Dr Gail Alvares from the Institute's Autism Research Team.

"However, using this technology, we hope to learn more about subtle facial differences in children with autism. This may help us identify and diagnose children earlier." The team has recently procured a new 3D camera that takes very quick, and very accurate, photographs of faces.

They are scanning the faces of babies as young as 9 months of age and in pre-adolescent children with autism up to 12 years of age and their families.

The technology is usually used in medical diagnostics and in surgical applications but the team is trialling this technology to investigate small facial differences in children with autism.

"The average age for an autism diagnosis in Australia is four and half years old which is far too late," Gail says.

"Research shows early intervention is incredibly effective in improving developmental outcomes and our aim is to see children diagnosed as early as 12 months."

Vanessa O'Donnell has enrolled her son Raiden into the study. Raiden was diagnosed early at two years of age and Vanessa says they want to help others.

"We learnt early that Raiden was autistic and because of that we were able to get him into early intervention. We did the 20 hours a week before he turned six and they say that's the most important time," Vanessa says. 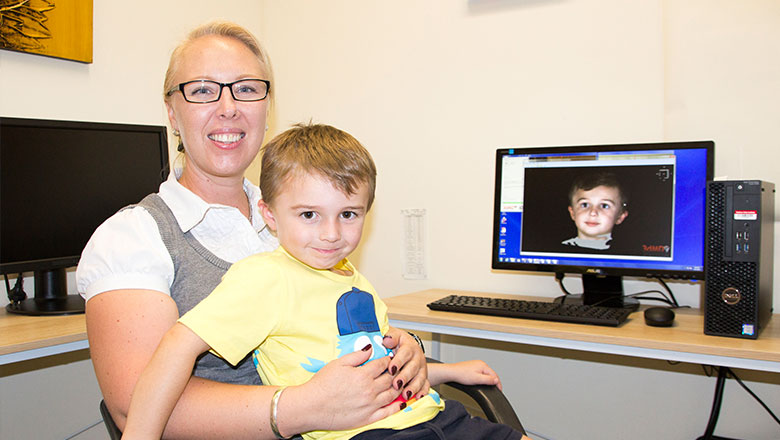 Vanessa believes that without that early diagnoses, Raiden would not be as academically advanced as he is today.

"He's now in a program where he does half mainstream school in the morning for pre-primary and half at an autism specific school. He's doing great at school and that means he can just concentrate on those social aspects that are difficult for him."

Vanessa says anything her family can do to give other kids the same opportunities as Raiden is well worthwhile.

"There's a little boy we know who only got the diagnoses at four and he's non-verbal at age six. It's hard to pin point a reason in hindsight, however, when Raiden was first diagnosed he was non-verbal and obviously he's come leaps and bounds. He's now able to communicate at an age level where he should be.  You see things like that and you think what could have been because those early years are just so important."

To express your interest in taking part in the study, please email the Autism Research Team, call 9489 7721 or send the team a message on Facebook.