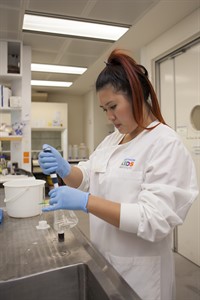 About half of all science graduates are women but despite large numbers entering the industry, women are still struggling to secure the top jobs.

The Telethon Kids Institute would like to see that change and that is why we are participating in a pilot program to improve the promotion and retention of women and gender minorities in science.

Telethon Kids Institute researcher Professor Susan Prescott, who is leading the pilot at the Institute, said the Institute was committed to working towards achieving the Athena SWAN Charter's aims.

"We are committed to the advancement of gender equality in academia, addressing unequal gender representation across academic disciplines, and removing the obstacles faced by women in particular, at major points of career development and progression," Professor Prescott.

Telethon Kids Institute Director Professor Jonathan Carapetis said the Institute was honoured to be involved in the pilot.

"Despite there being roughly equal numbers of men and women in science, men dominate the majority of senior positions," Professor Carapetis said. "We need to examine why talented women are not being promoted in science and remove those barriers."

The Telethon Kids Institute has been selected to participate in the second tranche of the SAGE pilot which will begin in September 2016.