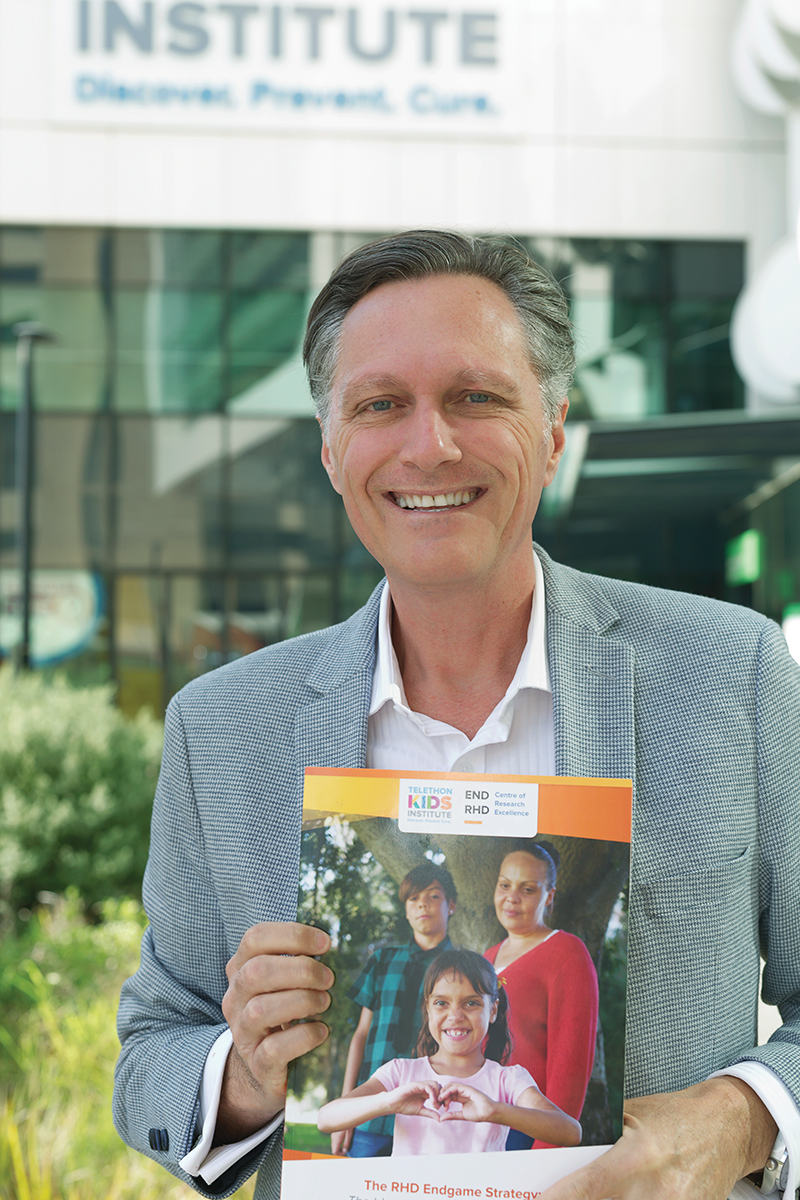 Professor Jonathan Carapetis has made eliminating rheumatic heart disease his life’s work, and nearly 30 years into the task he’s never been more confident the end is in sight.

But his optimism relies on government funding and facilitating a series of vital strategies identified in a recently released blueprint – designed to wipe out the disease within a decade.

It’s a disease many people have never even heard of – and for good reason, since for most Australians it was eliminated almost half a century ago – but for thousands of Aboriginal and Torres Strait Islander people, rheumatic heart disease (RHD) is still very much a reality.

Caused by Strep A bacteria, RHD starts with a sore throat or a skin sore. Without appropriate treatment, these problems can spark an abnormal immune reaction in the heart, leading to life-threatening damage to the heart valves. Many children who end up with RHD require open heart surgery and lifelong medical treatment. Others – their cases picked up too late – simply die.

All that could change thanks to a comprehensive strategy released late last year following years of intense collaboration between researchers, Aboriginal and Torres Strait Islander leaders, communities and people with lived experience of RHD and its precursor, acute rheumatic fever (ARF).

Compiled over five years by the END RHD Centre for Research Excellence, an Australia-wide collaboration based at the Telethon Kids Institute since 2015, the RHD Endgame Strategy lays out a blueprint that would allow the Federal Government to meet its commitment to eliminate RHD in Australia by 2031.

The Strategy, endorsed by 26 leading health and research organisations and launched in September 2020, reviews current and potential strategies to fight ARF and RHD and identifies five Priority Action Areas which, collectively, have the greatest potential to achieve elimination.

Chief among them is the requirement that action must be led by Aboriginal and Torres Strait Islander people, with community-based programs focused on healthy environments, early prevention, and care and support for those who already have RHD.

Telethon Kids Institute Director Professor Jonathan Carapetis – one of the world’s leading experts on RHD and senior author of the Endgame Strategy – said the Strategy marked the first time a comprehensive evidence base had been developed showing how RHD could be eliminated.

He said RHD was a disease usually only seen in developing countries, yet Aboriginal and Torres Strait Islander people had some of the highest rates in the world, with more than 5,000 living with RHD or ARF.

“Without implementation of the Endgame Strategy, this number will more than double in the next decade,” Professor Carapetis said. “At least another 8,000 Aboriginal and Torres Strait Islander children will develop ARF or RHD by 2031 if we simply stick with business as usual.

"Australia has an obligation to act."

Since its launch the Endgame Strategy has informed updates of RHD Action Plans in Queensland and the Northern Territory; and the National Aboriginal Community Controlled Health Organisation (NACCHO) is hoping to host a national implementation unit for the Strategy.

In February 2019 the Federal Government announced it was committing $35 million to develop a vaccine to prevent RHD and other life-threatening conditions caused by Strep A – work Telethon Kids is heavily involved with as a key partner in the Australian Strep A Vaccine Initiative (ASAVI). Global philanthropic organisation, Open Philanthropy, has also contributed US$5.3 million to fund the Strep A vaccine clinical trial.

Following the Endgame Strategy’s release, the 2021/22 Federal Budget included $12.1 million for continued support of RHD control programs, with another $12.8 million to be invested tackling RHD over the coming four years.

But lead author of the Endgame Strategy and END RHD Head of Strategy, Dr Rosemary Wyber, said that while this re-funding of existing strategies would help, continuation funding alone would not change the trajectory of RHD in Australia.

“The RHD Endgame Strategy makes it clear that a transformative shift to Aboriginal and Torres Strait Islander leadership and substantive ongoing investment to address the structural, social and environmental determinants of health are also needed,” Dr Wyber said.

• The Rheumatic Heart Disease Centre of Research Excellence (END RHD CRE) was established in 2014 to address the urgent need for a comprehensive, evidence-based plan to eliminate RHD across Australia

• The NHMRC-funded CRE brought together leading experts from 16 institutions across Australia, including Telethon Kids Institute, with expertise in areas including infectious diseases, epidemiology, ethnography, disease modelling, and economic analysis

• In addition to a series of research studies, some of which are ongoing, the END RHD CRE synthesised the collective experience of communities, clinicians, Aboriginal Community Controlled Health Organisations, and government and non-government organisations, pairing it with 25 years of research to produce the RHD Endgame Strategy

• The Strategy was launched by Federal Health Minister Greg Hunt and NACCHO CEO Pat Turner AM, together with Professor Carapetis, in September 2020

• It was produced in collaboration with Aboriginal and Torres Strait Islander communities and leadership, including NACCHO

• The Strategy lays out five key priority areas for immediate attention, with a strong emphasis on Aboriginal and Torres Strait Islander-led approaches

• Having delivered on its primary goal of producing the Strategy, the END RHD CRE wrapped up in March this year

Strategy a chance to end the cycle of sadness

For Pat Turner, CEO of the National Aboriginal Community Controlled Health Organisation (NACCHO) and co-chair of END RHD, the Endgame Strategy offers an opportunity to not only end a cycle of infection, disease and tremendous sadness caused by RHD, but tackle wider issues leading to a gap in outcomes for Aboriginal and Torres Strait Islander people.

She said those working in the busy Aboriginal and Torres Strait Island primary healthcare sector rarely chose to focus on a single disease.

“But rheumatic heart disease sticks out. It’s the greatest cause of cardiovascular inequality for our people in this country. Non-indigenous people literally don’t get it. Ninety-eight per cent of people who get RHD are our people.

Ms Turner said NACCHO had prioritised RHD because it exemplified the gaps in prevention in the health system and in outcomes – and because tackling RHD would address so many other health outcomes with similar risk factors.

“The only possible solution is a comprehensive, Indigenous-led, primary healthcare-based strategy of both prevention and treatment,” Ms Turner said.

“This work is transformative, not just because we can save lives and prevent human suffering with rheumatic heart disease – that is important – but also because a comprehensive community-led approach to primary care and environmental health will help address so much more – ear disease, eye disease, childhood lung infections. RHD is just the start of this new way of working.

“We are delighted to have the Endgame Strategy behind us, to give us the technical foundation for all the work ahead. The next steps to put this into practice are a collective responsibility.