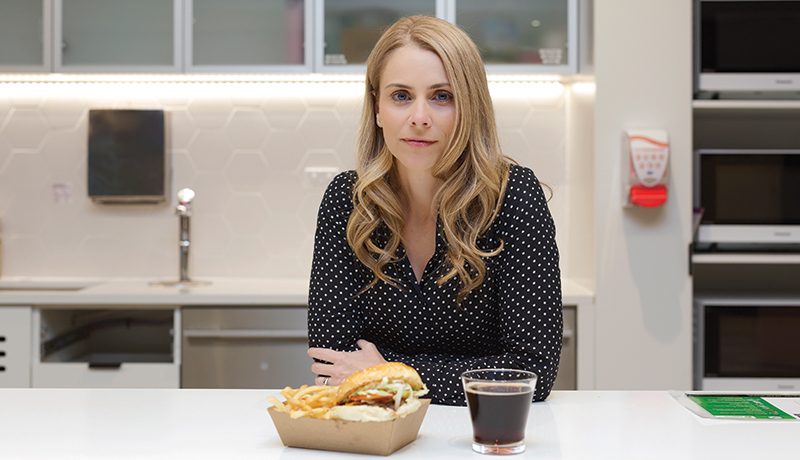 A new rapid research funding model is translating into quick results, with findings informing a public health campaign that could banish much of the unhealthy but influential advertising kids see on the way to and from school.

By mid-2019 population health researcher Gina Trapp had spent more than a year pursuing on and off a project she knew could have a big impact on kids’ health – if only she could get it funded.

Keen to understand how many junk food ads kids were exposed to on their way to and from school – and how this translated into their eating habits and overall health – she had been sending prac students out to comb the streets near schools and take photos of whatever outdoor advertising they came across.

Initial results were shocking – showing kids were being bombarded with junk food ads on buses, trains and static signs within metres of schools – but a lack of funding and staff meant progress was slow.

Enter Cancer Council WA, which had been discussing with Institute leadership ways the two organisations could partner on research to propel quick, easy advocacy wins on shared policy priorities – particularly around childhood obesity.

Among other goals, both organisations were keen to see junk food advertising removed from government-owned property, including public transport and billboards.

“The idea was to invest in very quick research, turn it around really fast and use it to advocate for the particular policy change we were seeking from government,” Mrs Sartori said.

Healthway was supportive of the idea and the Rapid Obesity Policy Translation (ROPT) program was born.

With Dr Trapp already chipping away at exactly the kind of research needed, Cancer Council WA commissioned her to formally audit the amount and type of outdoor advertising children were exposed to on the way to and from school.

“It was perfect timing because I’d already been doing this research, but on a shoestring,” Dr Trapp said. “We had this data collection half underway already, but it was heavily reliant on the availability of students.”

Now with the resources she needed, Dr Trapp was able to rapidly scale the project up and fund biostatistical analysis – achieving in just eight months what it would have taken her more than two years to do on her own.

One of the more startling findings of the audit, which logged more than 5,500 outdoor ads, was the sheer number of junk food ads on State-owned assets.

“Eighty per cent of food ads on bus shelters were for junk food and alcohol.”

Together with complementary studies from Curtin and Deakin universities – also backed by the ROPT program – Dr Trapp’s findings underpinned a joint statement by Telethon Kids, Cancer Council WA and other trusted health agencies calling on the WA Government to ban junk food and alcohol advertising on State-owned assets.

At a pre-election forum a couple of months later, Health Minister Roger Cook promised to launch a taskforce to look at implementing such a ban if the government was re-elected.

While the taskforce has not yet materialised, in February this year the City of Mandurah – having been sent the research while considering its own approach to junk food advertising – ratified a policy to prohibit unhealthy food, alcohol and tobacco/smoking advertising on street signs, bench seats, banner poles, bins, billboards and bus shelters on City-managed lands and road reserves.

“The City of Mandurah’s decision is a positive step forward and it would be great to see other local governments following suit, but there’s only so much local governments can do and we’d really like to see the State Government take the lead on this,” Mrs Sartori said.

Dr Trapp and a team of researchers mapped the advertising environment within a 500m radius of 64 randomly selected public and private primary, K–12 and secondary schools across Perth, covering high and low socioeconomic areas.

Working in pairs, research assistants trawled the streets by foot and took a geotagged photo of every outdoor ad they found. They recorded as much information as possible about each ad, including type (billboard, bus shelter, freestanding); whether it was advertising food or non-food; healthy or unhealthy food; and proximity to schools and food businesses.

The researchers identified 5,636 outdoor ads, with 30 per cent of those (1,708) devoted to food. Of those food ads, 74 per cent were for unhealthy foods – and one in three of those unhealthy food ads was for alcohol.

“Only 8 per cent of the food ads featured any kind of healthy food item,” Dr Trapp said.

The team also recreated bus, train and walking routes to 24 schools to calculate how many junk food ads kids might typically see on their way to and from school.
“If kids took the train to school, it worked out to be on average 37 junk food ads they were exposed to per one-way trip, compared to 2.4 healthy food ads,” Dr Trapp said. “The top three foods advertised were sugar-sweetened beverages, fast foods, and alcohol.

f you assume the amount and proportion of junk food ads stay constant, on average, Perth school children would be exposed to just under 15,000 junk food ads on their journey to and from school over the course of a year, compared to only 960 healthy food ads.

Dr Trapp said it was well established that junk food advertising was linked to kids’ food preferences, the types of food they pestered parents to let them eat, and their dietary intake and weight status, however, much of the research on children’s exposure to junk food advertising so far had focused on television advertising.

“Very little research has quantified what’s going on in our outdoor spaces, and what’s interesting is that compared to TV advertising, with outdoor advertising you can’t switch it off – it’s always ‘on’ compared to other mediums of advertising,” she said. 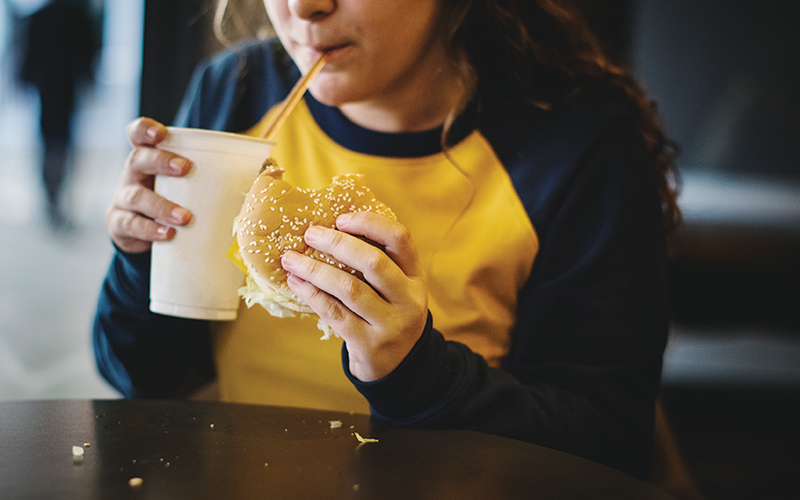 Cancer Council WA (through funding from Healthway in partnership with Telethon Kids) have funded the first stage of another Rapid Obesity Policy Translation project being led by Dr Gina Trapp – one that will allow her to analyse the food-buying habits of children from a northern suburbs high school before and after a major fast-food outlet is built directly across the road.

Approved despite the objections of public health advocates and school leadership, the outlet – which will be visible from classrooms – will be built this year.

“It’s heartbreaking, really,” Mrs Sartori said. “This school is trying so hard to keep their kids healthy and has worked to build up a really healthy canteen, and suddenly they’re going to have this fast-food outlet right across the road. But at the moment, planning legislation doesn’t allow this kind of public health impact to be taken into consideration.”

If we are going to argue this kind of community impact, we need to provide a lot of evidence

“That sort of evidence is vital but it’s so rare to get it – that’s where this Rapid Obesity Translation Policy program really comes into its own.”

The project’s funding was originally earmarked for another study but was quickly diverted once the outlet was approved and Cancer Council WA realised how urgently Dr Trapp needed to move in order to get important comparative data before construction.

“We know it takes about five months for one of these outlets to get built, so to be able to just channel some funding to Gina straight away to conduct this research was perfect timing,” Mrs Sartori said.

Dr Trapp said such a project would have been impossible through normal funding mechanisms.

“It can take up to a year to write the grant, be assessed, and receive the money if you’re successful,” Dr Trapp said. “By then the outlet has been built and the boat has sailed.”