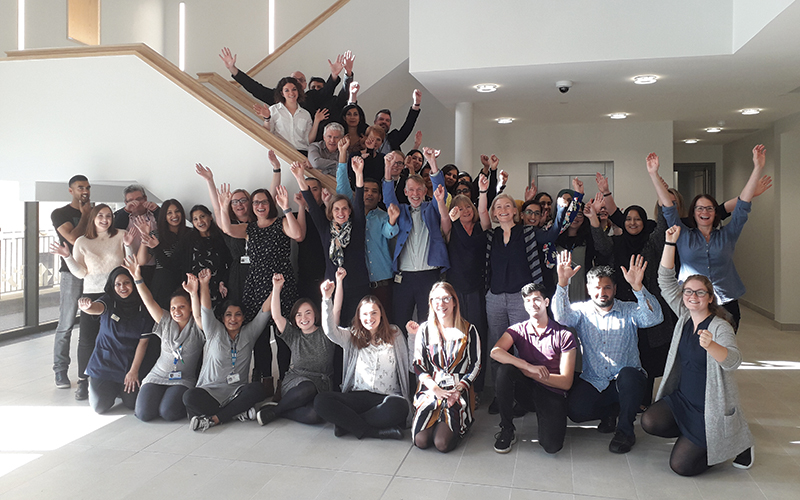 Researchers leading WA’s landmark ORIGINS Project – a collaboration between Telethon Kids Institute and Joondalup Health Campus – have spearheaded a global network that will see them join forces with similar interventional cohort studies across the world to maximise data collection and learnings for all.

Now in its fourth year, The ORIGINS Project has more than 5,500 families involved in the study and is making steady progress in its bid to better understand how to optimise the early environment – providing crucial insights expected to boost the health and quality of life of the next generation.

Across Australia and around the world, other researchers are similarly following local populations – each running interventional cohort studies that explore different research themes over time.

Now, eager to learn from these similar studies and harmonise data collection in a way that benefits everyone, ORIGINS has established the Interventional Cohort Network so the different groups can share what they have learned.

The network – which evolved from the work of ORIGINS Co-Director Professor Susan Prescott, who works with multiple international organisations – currently consists of four projects: ORIGINS, GenV in Victoria, BestSTART SWS in New South Wales, and Born in Bradford (BiB) in the United Kingdom.

Despite plans for an inaugural meeting in Amsterdam being thwarted by COVID-19, the group has held virtual meetings and has already prioritised what they hope to achieve in collaboration.

Ms Davis said the group had begun by comparing their methodologies – aspects that were working well and others that were challenging – and discussing potential future collaborations, with a particular focus on embedding interventions for disadvantaged populations within cohorts.

The network is also looking at key measures they can collect across the different cohorts which can then be analysed for comparison, establishing similarities and differences; and discussing multi-site interventions and how they can be adapted to the needs of each community.

“An overarching key focus of the network is to discuss how to best translate the research that is coming out of the studies to ensure it is valuable and relevant,” Ms Davis said.

“The biggest challenge for interventional cohorts is in the methodology of proving cause and effect. When you’re actually intervening with the cohort by having them involved in the study, it is difficult to identify the exact influence on health outcomes. We are testing things in the real world with real-life impacts and influential factors, and these factors vary enormously globally.”

Ms Davis said it was a different way of looking at research.

“We’re all in agreement within the network that, while our studies are not purely observational, ultimately the kids benefit regardless of the research outcomes and findings and that is what we are all hoping to achieve,” she said.

Ms Davis said the collaborative nature of the network – including the way it harmonised data collection and provided a valuable resource of long-term data on the health and wellbeing of families – opened the way for the different cohort studies to identify and answer new health challenges.

“Importantly, this ability to monitor in realtime can indicate critical opportunities and ways to intervene to prevent future health problems in subsequent generations.”

Ms Davis said that although ORIGINS was a community project, its ultimate goal was to address the rising global burden of non-communicable diseases.

“Collaboration nationally and internationally will enable harmonisation of multiple data collections and testing of interventions in different population groups,” she said.

From UK to WA – the impact of COVID

ORIGINS researchers have reached across the world to compare the experiences of families dealing with COVID-19 in a hard-hit area of the United Kingdom to those of Perth families, who have remained relatively unscathed.

A collaborative paper being developed between The ORIGINS Project and the Born in Bradford study in the United Kingdom demonstrates what can be achieved when large cohort studies pool their knowledge.

The two projects examined the similarities and differences experienced by families in their very different cohorts as a result of the initial COVID-19 lockdown last year.

“Bradford is a particularly disadvantaged area of the UK which has been hit very hard by the pandemic,” lead author and ORIGINS Research Fellow, Dr Lisa Gibson said.

“The population has experienced extended lockdown and high numbers of cases of infection. By comparison, the ORIGINS cohort in Perth, WA has been relatively untouched by COVID and has been fortunate to have low case numbers.”

In a yet-to-be published paper which has been submitted to an international journal, researchers from the two studies focused not on virus contraction, but the impact of lockdown on families’ day-to-day lives and functioning, such as financial pressures, their mental health, and feelings of isolation and anxiety.

“Both of these studies are looking to understand people’s experiences of living through this pandemic in two very different environments,” Dr Gibson said. “There are notable differences but many similarities in the initial impacts of a global pandemic.”

Further collaborative research between the ORIGINS and Born in Bradford cohorts is now under way to examine attitudes and perceptions around COVID-19 vaccination, as well as the intention to vaccinate among parents and children. 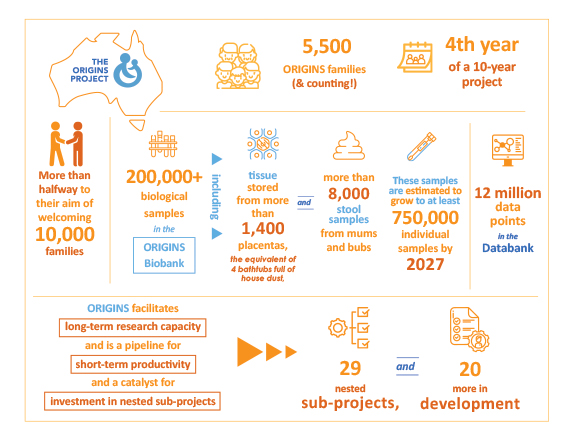 The ORIGINS Project is not only changing long-term outcomes for future generations but is providing critical information for families in the short-term, through real-time feedback.

Elizabeth Roberts never fully understood what led to the death of her first child, Tiana, just 15 days after the little girl’s birth in Malaysia.

So when she heard about The ORIGINS Project at an antenatal appointment while pregnant with her second child, she jumped at the chance to sign up.

“The nurse explained all the extra assessments and testing we would receive in my baby’s first five years if we joined the study, and we knew that would be really important to us this time around,” Elizabeth said.

It turned out to be a good decision for the whole family: at son Tate’s one-year ORIGINS assessment – part of standard ORIGINS protocol – the ORIGINS paediatrician noticed he had multiple birthmarks and low-set ears.

Blood and skin prick tests revealed Tate had DiGeorge Syndrome, a genetic condition caused when a small part of chromosome 22 is missing, which can lead to congenital heart problems, developmental delay and trouble learning.

“When I heard the symptoms and diagnosis, I realised it may have been me that had unknowingly passed on the DiGeorge gene to Tate,” Dad Mark said. “I had struggled a bit with learning and development issues myself and had also had to have my ears fixed as a child. Back then we didn’t realise it had a name.”

Elizabeth said if the family hadn’t been part of ORIGINS, they would never have known any of this until Tate presented with chronic heart issues or other health conditions much later in life.

Now aged 18 months, Tate has been diagnosed with a heart condition requiring surgery and with under-developed leg muscles, affecting his ability to walk. He is now seeing multiple specialists – valuable expertise Elizabeth said she wouldn’t have had access to otherwise – and, along with Mark, is undergoing genetic testing.

“The ORIGINS doctor explained Tate’s condition to us and organised all the specialists from cardiology, dermatology, physiotherapy and audiology,” Elizabeth said.

ORIGINS Co-Director Professor Desiree Silva said stories like the Roberts’ were what ORIGINS was all about.

Although the project’s overall aim was to collect and analyse samples and data to inform the causes of chronic conditions, the real-time feedback provided to families through free regular assessments and sample collections often provided families with the opportunity to intervene early in conditions that otherwise might not have been identified until much later in life.

“The impact of the family journey during our longitudinal study is changing outcomes for people,” Professor Silva said.

“These diagnoses that are being made along the way are also being tracked. If there is an abundance of certain findings, this can impact on the development of more specific studies and translation into clinical practice change – encouraging testing for certain conditions to become standard for child health nurses or GPs.”

The ORIGINS Project is generously funded by the Paul Ramsay Foundation and the Commonwealth Government of Australia through the Channel 7 Telethon Trust.