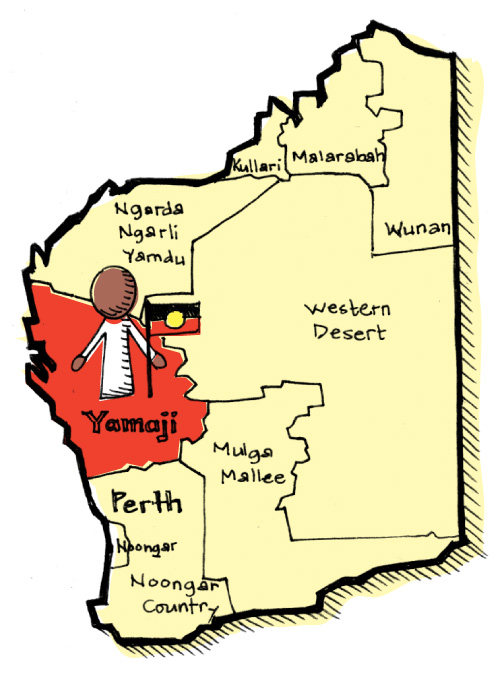 Yamaji (or Yamatji) is the name used to identify Aboriginal people in the Murchison and Gascoyne regions of Western Australia. ‘Yamaji” comes from the Wadjarri (or Wajarri) language and means ‘man’ or ‘human being’, so it is often used throughout this region to refer to ‘Aboriginal person’. Yamaji has come to be used almost universally throughout the region, probably because Wadjarri is the widest spoken remaining language.

Yamaji Country is in the Mid West region of Western Australia and stretches from Carnarvon in the north to Meekatharra in the east, to Jurien in the south. The Yamaji area covers nearly one fifth of Western Australia and includes coastal, regional and remote areas. Yamaji Country is known for fishing, farming and mining industries, tourism and recreation.

The Yamaji region in Western Australia contains many Aboriginal groupings. Approximately 10% of the total population of the region are Yamaji people, who live mostly in Geraldton and Carnarvon. Many Yamaji people also live in the smaller towns of Mt Magnet, Shark Bay, Mullewa, Cue and Gascoyne Junction, as well as in remote communities such as Meekatharra, Burringurrah, Yulga Jinna, Barrell Well, Wandanooka, Mungullah, Buttah Windee and Pia Wadjarri.

Today these are the main language groups of Yamaji people and their locations:

The Yamaji region has been home to many groups of Aboriginal people over thousands of years. In many areas the stories of the Dreaming (creation) continue to shape Yamaji  laws and customs. These laws and customs are the foundation of the social structures and teach men and women how they should behave, places they can go, food they can eat, and places where they can drink water.

The arrival of non-Aboriginal people and their laws and policies has caused much of the Yamaji knowledge and language to be lost. Despite this Yamaji people still have a strong sense of identity and spirit; they are determined to keep their culture strong for their children and young people. Yamaji children, families and communities are solid.