Strep A hits Perth family twice in one year 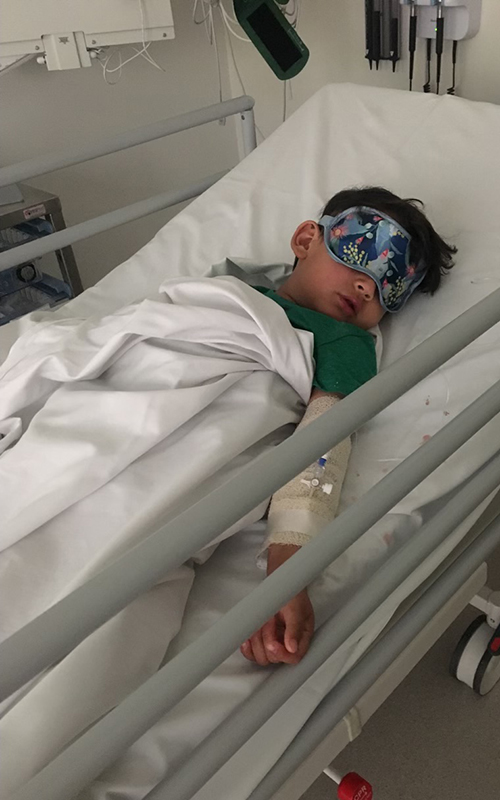 If Perth mum Carole Katz didn’t know the signs of Strep A infection a few years ago, she certainly does now. Her son Charlie, now 6, has ended up in hospital twice with invasive Strep A infection over his short lifetime – the first time when just three years old.

Strep A bacteria can cause sore throats, skin sores and tonsilitis in children but can also lead to life-threatening complications and serious disease affecting the heart and kidneys.

Charlie’s first run-in with Strep A landed the normally bouncy and talkative pre-schooler in hospital for a week after he became unusually lethargic, with a sore neck, skin rash, and persistent 39C fever.

“Charlie didn’t actually verbalise that he had a sore throat but we now know he must have had a throat infection because he had a retropharyngeal abscess – a pocket of pus at the back of the throat,” Carole says.

Tests revealed a Strep A infection that had by now spread to the little boy’s blood, and he was given intravenous antibiotics.

Before the antibiotics he was just lying in bed – sore, not talking or wanting to do anything,” Carole says. “That was scary. But after about 48 hours we could see the antibiotics were doing their job – he started to perk up and wanted to watch TV.

Once he was well enough, Carole and her husband Ishay headed home with Charlie, confident the drama was behind them, but a year later – as Carole was recovering from giving birth to her second child, Léna – Charlie fell ill again, this time developing a 40C fever.

“Because of the previous episode, we just knew something wasn’t right,” Carole says. “He also asked to have a nap, something he never does.”

Leaving Carole at home with their four-day-old daughter, Ishay once again rushed Charlie to the emergency department, where he appeared even more unwell than the first time.

“Before I know it he’s been admitted,” Carole says. “It was the same story again – bacteraemia, Strep A in his blood – but this time with the complication of septic arthritis, a pocket of pus developing in his knee. I just remember feeling so helpless and anxious as I saw my little boy in so much pain when he tried to move around.”

This time, in addition to intravenous antibiotics, Charlie needed surgery to remove the pus – an operation that extended his hospital stay to 13 days and took several weeks to fully recover from.

“It took Charlie quite a while before he was walking properly again, but he’s doing really well now,” Carole says.

Now a communications specialist who works at the Telethon Kids Institute, Carole is urging families to take part in a new study that will not only investigate causes of sore throats in children, but contribute to global efforts to tackle Strep A.

Although it doesn’t always lead to serious disease, Strep A is a frequent cause of sore throats (often called ‘strep throat’), skin sores and tonsilitis in children,” Carole says. “If it’s not treated properly, it can lead to kidney disease, heart disease, and life-threatening complications.

She says that although Invasive Strep A disease is three times more common than meningococcal disease in Australia and just as deadly, few families know about it.

A simple study being led by the Australian Strep A Vaccine Initiative (ASAVI) – which is playing a leading role in the global effort to develop a Strep A vaccine – is expected to not only raise awareness, but could help save millions of lives around the world.

The year-long Sore Throat Study is seeking to recruit 1,050 healthy children from the Perth metropolitan area and from Melbourne to find out more about sore throats – which affect 616 million people globally every year. Information gathered from the study will provide vital clues about how a vaccine could be used to prevent a wide range of illnesses caused by Strep A.

“An important step in the bid to develop a Strep A vaccine is to understand more about sore throats in children – the most common causes, how they can change at different times of the year, and how to prevent them,” Carole says.

“I encourage families to get involved in this study. It’s one simple thing they can do to help make a difference to protect our kids.”