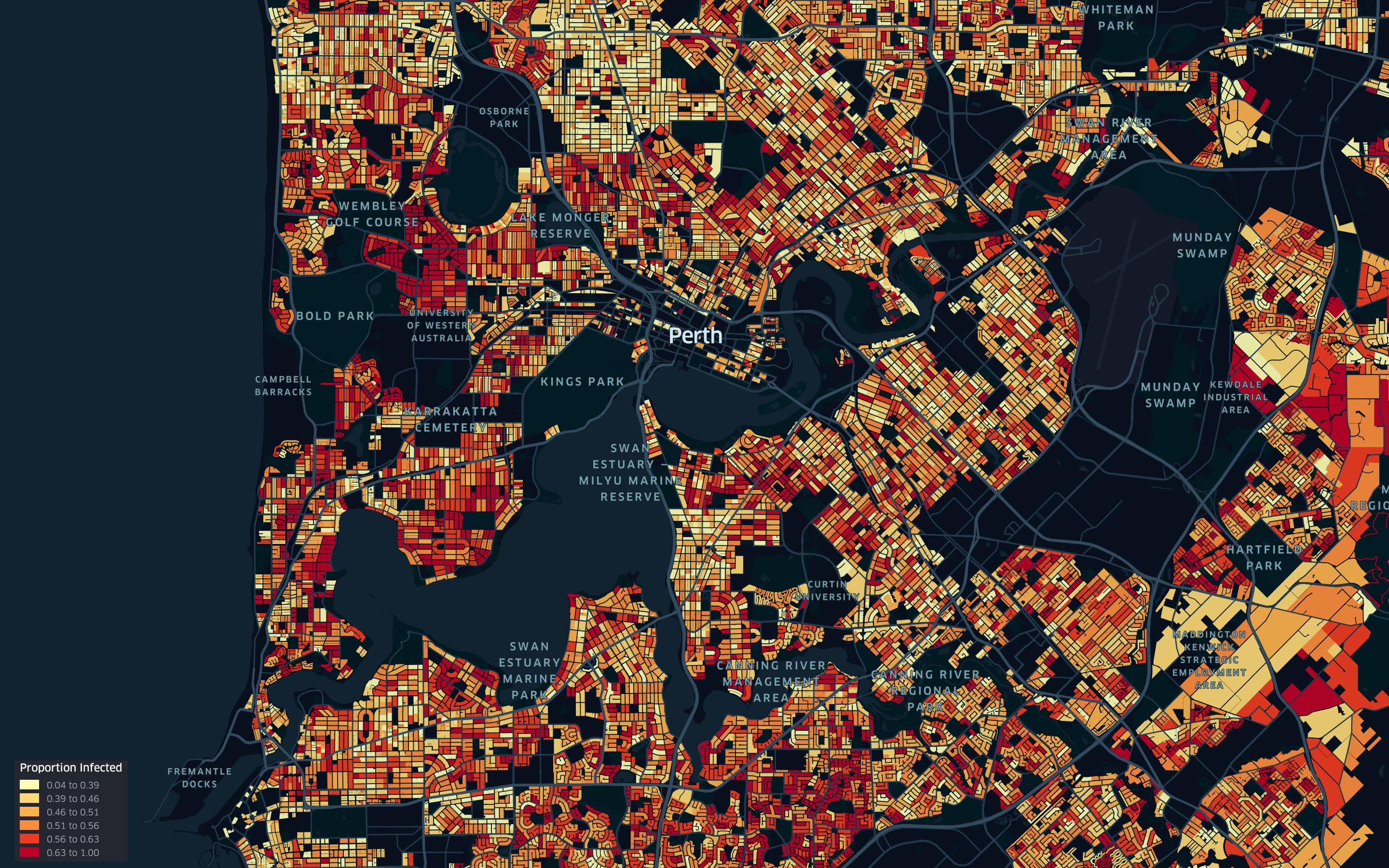 Modelling epidemic patterns. Fine-grained simulation outputs can be generated with the COVID-19 modelling work. This graphic shows an example for the spatial pattern of the final Omicron outbreak size in one of the hundreds of realisations generated by the simulation software for the Perth Metropolitan Area. These modelled patterns are compatible with non-spatial daily reported cases for Western Australia. This image was generated using Location Information from Landgate.

Western Australia’s current Omicron COVID-19 outbreak could jump by 147,000 cases if mask mandates are abandoned before the Easter long weekend, according to sophisticated new modelling conducted by Telethon Kids Institute and Curtin University.

The team created a new software tool to build a “virtual WA” by using big data to map out the state’s unique physical and social geography, creating the most detailed COVID-19 modelling ever applied to an Australian outbreak.

This allowed them to create a simulation of Western Australia’s 2.7 million residents, factoring in households, communities, schools and workplaces, with locations matched one-to-one against the real world in a way the researchers believe captures real interactions of our daily lives.

The modelling is updated every day and takes into account the increased transmissibility of the BA2 Omicron variant, which is now widely prevalent in Western Australia.

The advanced model suggests that if Western Australia scrapped mask wearing in all situations, except for hospitals and aged care facilities on April 14th, there would be between 600 to 740 deaths before August 1st, compared with an estimate of 450 to 630 deaths if mask mandates remain. That equates to an increase of between 17% and 30%.

“We expect this outbreak in WA will be really more of a plateau than a peak,” he said.

We can expect to see numbers remain high for some time, before slowly coming down, so just because case numbers seem not to be climbing significantly each day doesn’t mean we are out of the woods.

“The reason we created this model was to have that accurate representation of the population which allows us to evaluate targeted and precise scenarios and simulate the virus spread under different restriction settings.”

The figures suggest daily case numbers are likely to remain above 5,000 until around May 19th, if there is no change to current restrictions.

“We expect that the proportion of cases reported that are in children and young adults will decrease over time,” he said. “They are the first infected because of their large contact networks, with infections in older populations becoming increasingly common later in the outbreak.”

The modelling also takes into account data from the recent COVID-19 infection study, which found no cases of undetected COVID-19 in Perth. Researchers conducted the pilot survey to gain an understanding of the true picture of COVID-19 infections in the community. The team tested 396 people in 266 different households and all of them returned negative results.

Lead researcher on the COVID-19 Infection Study, Professor Nick Golding, said the fact that no positive cases were found was a surprising, but encouraging, result.

“This suggests that there are far fewer people with undetected infections in the community than we had feared,” he said. “This data suggests that around three quarters of all infections are being detected by the health system, which is higher than had been expected.

This is really valuable data for the health system to have. It means disease modellers and Government can be confident that there is not a huge proportion of undetected COVID-19 lurking in Perth.

“The fact that none of those people tested positive for COVID-19 is likely due to a combination of our very high vaccination rate and the easy availability of PCR and RAT tests.”

Professor Golding said the rate of people who volunteered to take part in the study was higher than expected.

Professor Peter Gething, head of the Geospatial Health and Development team and Telethon Kids Institute and Kerry M Stokes AC Chair in Child Health at Curtin University, said the new modelling was the first time this level of detail had been applied to Western Australia’s unique geographical and social context.

“We’re able to use this tool to track the spread of the virus in this virtual world, factoring in the population’s movements and social networks, in a way that mirrors the reality of life in Perth,” he said.

“This means we can create really fine-grain modelling that takes into account where people work, where they go to school, where they socialise, and where they shop to develop a really clear prediction of how the virus is most likely to spread.”

The team behind the modelling work has pivoted to studying the spread of COVID-19, after establishing world-leading research to map the global spread of Malaria. The team – recruited from all over the world and now based in Perth – will continue to use the same sophisticated model to develop predictions for WA throughout the pandemic.