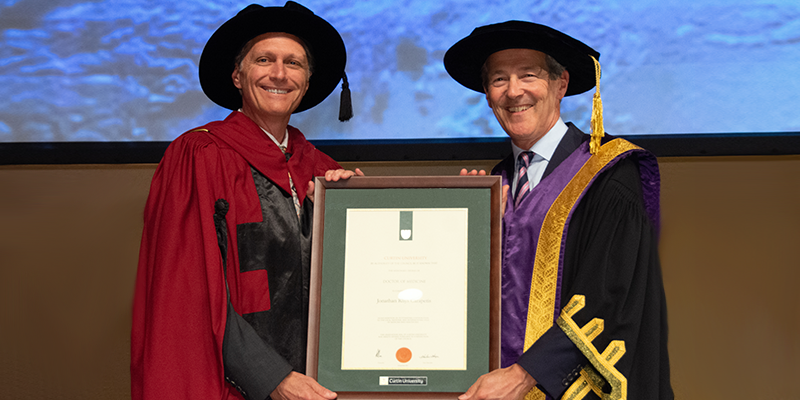 Telethon Kids Institute Director Professor Jonathan Carapetis AM has been made an Honorary Doctor of Medicine by Curtin University in recognition of his outstanding contribution to the local, national and international field of medicine and healthcare.

The Honorary Doctorate particularly recognises Professor Carapetis’ commitment to eliminate rheumatic heart disease (RHD) among Aboriginal and Torres Strait Islander people – a goal which has driven much of his career for the past 30 years. Professor Carapetis, a paediatric infectious diseases clinician and researcher, is widely regarded as the world’s leading expert on RHD.

“Jonathan’s commitment to end RHD has seen him work tirelessly to gain tangible support from both major political parties, a global mandate from the World Health Assembly to prioritise ending the disease globally, the beginnings of a national RHD Roadmap, and Australian federal funding of $35 million to develop a Strep A vaccine,” the citation noted.

“Due to his efforts, the possibility of ending RHD is finally starting to become a reality. This is the first time that the research, advocacy and Aboriginal Community Controlled Health sectors have come together with one voice to say: RHD needs to end.”

In September 2020 Professor Carapetis and colleagues from the END RHD Centre of Research Excellence – based at Telethon Kids until early this year – released the much-awaited RHD Endgame Strategy, an exhaustive report which sets out a blueprint to eliminate RHD in Australia by 2031.

Five years in the making, the Strategy represented the first time a comprehensive evidence base had been developed showing how RHD could be wiped out. The strategy proposes a series of initiatives across five priority areas, with a strong focus on Aboriginal and Torres Strait Islander-led approaches.

If followed – and appropriately funded – the Endgame Strategy could prevent more than 8,600 new cases of RHD and 660 RHD-related deaths by 2031.

Professor Carapetis is also co-director – in partnership with Professor Andrew Steer of the Murdoch Children’s Research Institute – of the Australian Strep A Vaccine Initiative (ASAVI), which is leading the Australian push to develop a vaccine to prevent RHD and other life-threatening conditions caused by Strep A.

Professor Carapetis said he was humbled to have his contributions to child and Aboriginal health recognised by Curtin University in this way.

“As an Institute we work very closely with Curtin University as part of a partnership dedicated to enhancing children’s health and medical research in Western Australia,” Professor Carapetis said.

“We share common goals of high-quality research aimed at making a tangible difference to the health and wellbeing of people in Western Australia and beyond. I’ve seen first-hand the fantastic work Curtin is doing to this end. It’s a privilege to be recognised, in turn, by such a highly respected university.”

Professor Carapetis was awarded the Honorary Doctorate at a graduation ceremony at Curtin University on Friday night.